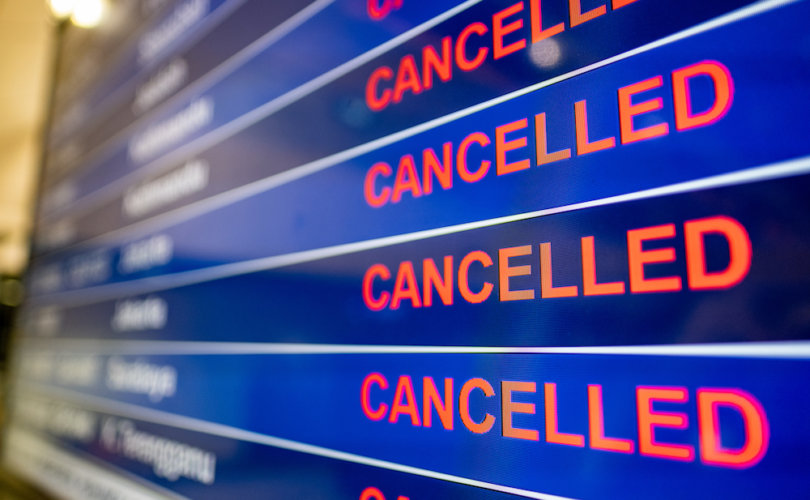 October 11, 2021, (LifeSiteNews) – It began with a trickle –– and then a flood –– of tweets on Sunday about Southwest Airline pilots calling in sick to protest their company’s COVID-19 vaccine mandate, and then a cascade of reports that pilots from other airlines, as well as critical employees in other segments of the transportation industry, are preparing to follow suit.

After Southwest pilots filed a lawsuit seeking an injunction against their company’s mandate, Southwest cancelled nearly 2,000 flights over the weekend, citing “bad weather.” While the airline and pilots’ union are dismissive of the reports of a pilot walkout, reports on Twitter and elsewhere have continued to emerge.

“The revolt begins at Southwest Airlines,” announced Alex Berenson via his Substack, Unreported Truths.  “Pilots at Southwest appear to be sicking out in a rebellion against vaccine mandates that has crippled the airline since Friday.”

“Why Southwest and not United?” asked Berenson.

“Maybe because LUV is based in Dallas and has a 50-year-history of standing up to government overreach. On Friday the pilots’ union asked for a temporary halt to the mandate,” he explained. “The flight cancellations began almost immediately and are continuing today.”

A Southwest pilot who wrote to Berenson explained why the pilots’ union is not publicly supportive of the ‘sick out’ reports:

“This pilot says he loves Southwest and finds the crisis painful but feels that if this is the only way Americans can stand up to these mandates, then let the chips fall,” concluded Berenson.

“Way more to this Southwest thing,” tweeted Jack Posobiec, senior editor at Human Events. “Other airline crews are joining in.”

Way more to this Southwest thing

Other airline crews are joining in

Posobiec said in another tweet that Transportation Secretary Pete Buttigieg’s office has been “getting lit up” since Saturday night by transportation industry lobbyists and “even a few CEO’s.” “They want him to talk to [Biden] about mandates, per [White House] official,” Posobiec said.

Secretary Pete’s office has been getting lit up since last night, transpiration industry lobbyists and even a few CEO’s. They want him to talk to B about mandates, per WH official

Want to know why?  They told their pilots and flight attendants they had until November to get jabbed.  So now they have to use all their banked vacation and personal time, or lose it.  And off duty crew are not picking up trips to cover.  Jacksonville ATC [Air Traffic Controllers] walked out too Milwaukee ATC is expected to follow today.

80% of our pilots are ex-military.  We see the tyranny that’s happening.  They’re coming for essential workers first (nurses, doctors, firefighters, police, military, teachers and transportation workers) and they’re coming for the rest of America next.  We’re not doing it for us, we’re doing it for America.  We swore to defend the constitution against all enemies.

From my dad who is a pilot about the current situation with Southwest airlines pic.twitter.com/44tFnM3tYz

A U.S airline pilot posted a video on Friday explaining the untenable position in which  airline COVID-19 vaccine mandates are placing pilots and other employees:

I’m being told that in order to continue my career as an airline pilot I must be vaccinated, which really means I have to choose between putting food on the table for my family and my freedom of choice.  Whether you believe vaccination is the right thing to do or not, the situation goes far beyond health.

We the American people have fought for freedom for 257 years.  We go around the world spreading ideas of freedom and democracy.  We help other countries and people fight for their freedoms, while ours are being stripped away.

You may think that being forced to wear a mask or get a vaccination is insignificant, but when you begin to compile mandate after mandate and loss of freedom after freedom it becomes very significant.

As each thing is taken away, we face what is known as the shifting baseline syndrome.  This syndrome changes our idea of a new and acceptable ‘normal.’  Soon we will not remember what it was like to have the freedoms we once did.  Our children and our grandchildren will experience less freedom and they won’t have the privilege or the pleasure to enjoy the same choices our parents had or that we have.

If we give into these mandates and we do not stand up for our freedom of choice, we dishonor every armed service person over the last 257 years ––a disservice to the people who fought and bled for the very freedoms we enjoy.

Whether you believe in vaccination or not, I’m standing up for your freedom of choice.

If we do not stand together and fight back in one voice, soon we can be told where to live, what job we will do, what religion to believe, and how many children we can have.

Do you really want someone telling your children or your grandchildren what, when, and how they will live every minute of their lives?

It’s time we take a stance.  It’s time we fight for our freedom of choice while we still can.

“Join us!” he urges at the end of the now-viral video, viewed over 999,000 times at the time and quickly climbing.

Candace Owens took to Twitter and urged her followers to retweet the pilot’s video message, saying, “STAND WITH THE PILOTS.  THIS is the America I know.”

RT TO STAND WITH THE PILOTS!

Other conservatives have taken to social media to support airline pilots refusing to work because of the “vaccine” mandates.

Southwest employees are true patriots. Rebellion against tyranny is such a beautiful thing.

“I stand with the flight attendants, ground crew and pilots who value their bodily autonomy!  CANCEL MY FLIGHTS — CONTINUE THE FIGHT!” tweeted Andy Swan, whose message has been retweeted thousands of times.

I stand with the flight attendants, ground crew and pilots who value their bodily autonomy!

CANCEL MY FLIGHTS — CONTINUE THE FIGHT!

Some Southwest Airlines passengers, displaced by the many cancelled flights, said they didn’t mind the inconvenience if due to protests against the COVID-19 vaccine mandate.

“I’m stuck in a city where I know no one, rental cars are sold out, hotels are full, and I may not be able to fly home due to the airline workers’ strike against govt mandates,” asserted traveler Ann Bauer.

“I’m ELATED. I will take an uber, find a Red Roof Inn and crawl home if I have to. Keep the faith.”

“If  Southwest Air employees end up saving America, it’ll be the only airline I ever fly,” said Emma Woodhouse.

If @SouthwestAir employees end up saving America, it’ll be the only airline I ever fly.

“Amazing. Southwest Airlines is blaming the weather for 1,000+ cancelled flights and not employees calling out sick over the vaccine mandate. Weird how the weather didn’t hit other airlines,” noted Robby Starbuck, a candidate for Congress in Tennessee.

“Sounds as accurate as Fauci’s science!” said Starbuck.  “This is only the start. Disobedience has begun!”

Amazing. Southwest Airlines is blaming the weather for 1,000+ cancelled flights and not employees calling out sick over the vaccine mandate. Weird how the weather didn’t hit other airlines. Sounds as accurate as Fauci’s science! This is only the start. Disobedience has begun!