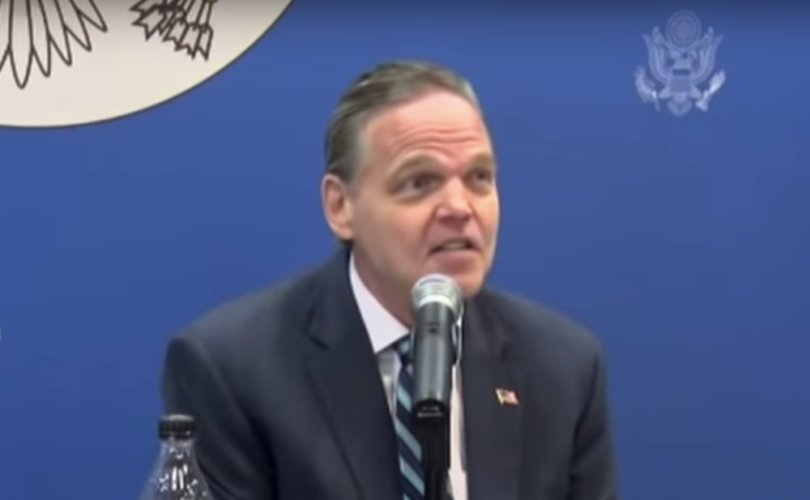 December 7, 2018 (LifeSiteNews) – The U.S. ambassador to Zambia quoted Pope Francis this week in urging the people of Zambia to adopt a softer line on homosexuality, amid an ongoing debate over a 15-year prison sentence for two men convicted of sodomy.

Japhet Chabata and Steven Samba were convicted last year of sex “against the order of nature,” with Judge Charles Zulu rejecting an appeal of their sentence last week.

Daniel Foote, the U.S. Ambassador to Zambia, responded that he was “horrified” by the “oppressive sentencing,” which he said would “do untold damage to Zambia’s international reputation by demonstrating that human rights in Zambia (are) not a universal guarantee.” He also contrasted the punishment with government officials’ alleged ability to “steal millions of public dollars without prosecution.”

Those comments didn’t sit well with Zambian officials such as Foreign Affairs Minister Joseph Malanji, who threatened to lodge a complaint with Washington over them.

Foote, who was nominated by President Donald Trump, responded to the controversy in a December 2 statement calling for an end to “the façade that our governments enjoy ‘warm and cordial’ relations” and accusing the Zambian government of wanting “foreign diplomats to be compliant, with open pocketbooks and closed mouths.” Zambia receives approximately $500 million in aid from the United States annually.

He said he has “nothing but the highest respect for your citizens,” but was “shocked at the venom and hate directed at me and my country, largely in the name of ‘Christian’ values, by a small minority” over his comments on homosexuality.

“I agree that this issue is completely up to Zambians to decide,” Foote continued. “You are blessed with a diversity of Christian denominations, and while I understand that many are not Catholic, let me cite Pope Francis. He has repeatedly spoken about the need for his Church to welcome and love all people, regardless of sexual orientation.”

Foote then quoted the Pope’s October 2016 statement that “People must be accompanied as Jesus accompanies them, when a person who has this condition arrives before Jesus, Jesus surely doesn't tell them 'go away because you are homosexual.'” (While that quote in isolation doesn’t contradict church teaching that calls on homosexuals to be met with compassion, critics interpreted it as potentially embracing homosexuality itself, in light of Francis’ other words and actions on LGBT issues.)

“I hope the government of Zambia commits to improve its decaying relationship with the United States but that is a decision for it to make,” Foote said.

So far, Zambian officials remain undeterred, with President Edgar Lungu declaring that the government would forgo U.S. aid if it was conditioned on acceptance of homosexuality.

The Trump administration announced in February a global initiative to press governments around the world to decriminalize homosexuality, a move that has divided some conservatives and failed to improve the Republican president’s standing among American LGBT activists.

Interested readers who wish to make their view of the situation known can contact the White House by clicking here.