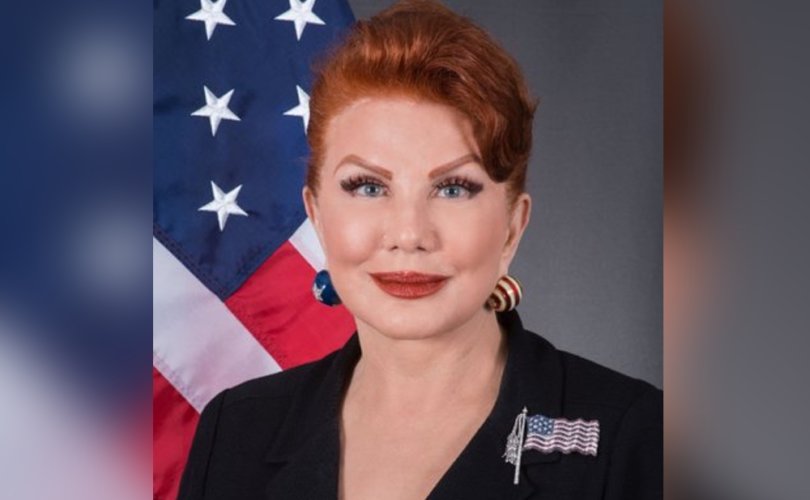 “Today is [the] 50th anniversary of the outbreak of riots against discrimination against sexual minorities in the Stonewall Inn Greenwich Village in New York, which gave rise to the LGBTQ movement,” Ambassador Georgette Mosbacher tweeted in Polish on June 28. “These events remind us of the importance of equality, freedom and tolerance.”

Her tweet displayed a photo with rainbow flags hanging from a balcony that appears to be part of the U.S. Polish embassy complex.

Following responses asked Mosbacher if she supported pedophilia and said the LGBT movement was now about totalitarianism and using terror to force exceptional treatment for a minority.

Another tweet displayed a large stop sign over a rainbow signifying the LGBT movement, and yet another gave Mosbacher a repeated thumbs-down, among other assorted expressions of disagreement and distaste.

Some shared photos illustrating disturbing examples of the movement’s sexualization of children.

Also the anniversary of the Poznań protests against communist government

But Twitter users also took the ambassador to task for being out of touch with the country where she serves as a diplomat.

Some responses took issue with Mosbacher’s tweet supporting a U.S. event resulting in the birth of the LGBT movement by pointing out that it was also the anniversary of the Poznań protests of 1956.

The 1969 riots at the Stonewall Inn in New York City, occurring June 28-July 1, where a group of homosexuals fought back against a police crackdown of a homosexual bar, are recognized as the formal beginning of the homosexual movement.

The Poznań protests, also known as Poznań June, took place in the western Poland city on June 28, 1956. They were the first of several massive protests against the communist government of the Polish People’s Republic, with workers demonstrating to demand better working conditions. Their protests were met with violent repression.

“No, dear Ambassador @USAmbPoland,” one user replied. “Today is the 63rd anniversary of the bloody suppression by the communist authorities of the uprising in Poznań. This makes us aware of the importance of freedom of conscience, religion, and speech. And the crimes of left-wing totalitarianism.”

Same-sex sexual activity has never been criminalized in Poland and its legality was reconfirmed in 1932.

Some Twitter users pointed this out to Mosbacher, and questioned whether it would make more sense to campaign for LGBT rights in countries that criminalize homosexual behavior.

Fifty-three ambassadors of countries and representatives of international organizations had signed an open letter expressing support for the June 8 equality parade (gay pride parade) and to raise awareness of issues affecting LGBT-identifying individuals in Poland.

The geopolitical information platform ForeignAffairs.co.nz published the letter. The U.S. ambassador is listed as one of the signatories.

In the letter’s call to action, signatories pledged “in particular to shield communities in need of protection from verbal and physical abuse and hate speech.”

“We need to jointly work on an environment of non-discrimination, tolerance and mutual acceptance,” they wrote. “This includes in particular sectors such as education, health, social affairs, citizenship, public service and public documents.”

Warsaw held the largest homosexual pride parade in central and eastern Europe on June 8, the New York Times reports, with diplomats from Canada, the U.S., and other Western nations participating “to show their support for what is considered a basic human right in many places.” The report did not specify whether Mosbacher was among them. Warsaw’s mayor, Rafal Trzaskowski, joined the parade for the first time.

‘Stand to defend the sovereignty of our country and Polish families!’

Majority Catholic Poland is experiencing turmoil and tension between LGBT advocates working to advance their agenda and traditional Poles.

Same-sex “marriage” remains illegal in Poland and homosexuality does not have special protection in law.

Trzaskowski, a member of Poland’s opposition party Civic Platform, signed a declaration in February promising an LGBTQ hostel and community center, a local crisis intervention system, along with anti-discrimination and sex education curriculum in schools that follows World Health Organization (WHO) guidelines, according to TIME.

In April, Jarosław Kaczyński, the head of Poland’s Law and Justice party (PiS) – which has been in power since 2015 – gave a speech on patriotism in which he called the LGBT and gender ideologies a foreign attack on the family and defended Polish culture as inextricably Christian.

For the last two years in Częstochowa Polish Catholics mobilized to block the city’s LGBT pride march from approaching the Jasna Góra Monastery and shrine to the Virgin Mary, where the icon of the Black Madonna of Częstochowa is housed. The Catholics were also protecting an annual children’s rosary pilgrimage as the pride march passed by.

The petition countering the open letter signed by the various ambassadors underscores what it calls an effort to impose upon Poland the “dictates of foreign ideologies” that question fundamental values such as biblical marriage and the right of parents to raise children in accordance with their own religious values.

It says that the controversial initiatives promoted by the ambassadors and others in the open letter undermine the social and legal order in Poland, citing the Constitution of the Republic of Poland, the Vienna Convention on Diplomatic Relations, additional legal documents, and public opinion polls.

“We do not want the ambassadors to engage in promoting initiatives that oppose 80% of Polish society and undermine the Polish constitutional order,” it states in part. “Express your indignation and sign a protest to all signatories of this letter. Stand to defend the sovereignty of our country and Polish families!”

The Trump administration annulled the Obama-era policy allowing full permission and discretion to fly rainbow flags during June for pride month, requiring embassies to first seek permission. This year the office of the State Department Undersecretary for Management denied requests from a handful of embassies to fly the rainbow flags on the building’s official flagpole in June. However, diplomats are still allowed to display the flag elsewhere, including on embassy walls and inside buildings.