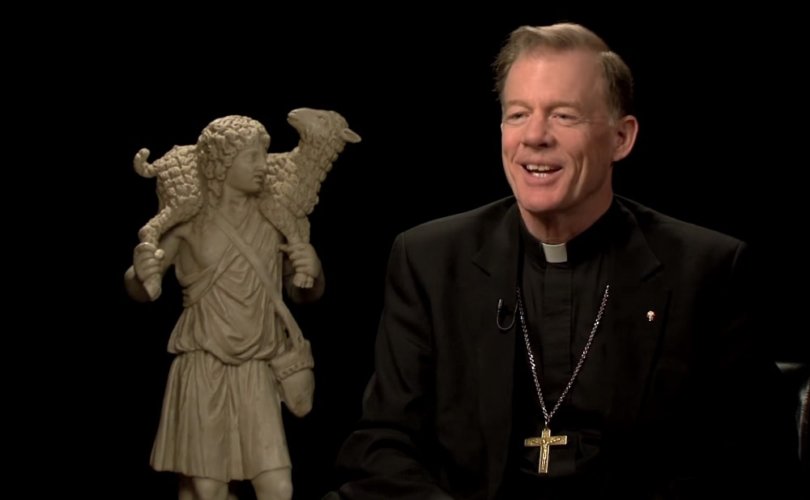 March 6, 2020 (LifeSiteNews) — Sante Fe’s Archbishop John Charles Wester has asserted that Communion in the hand is “every bit as respectful” as receiving on the tongue in a statement regarding his response to the coronavirus.

“There is nothing ontologically preferable to receiving on the tongue,” he said as he announced that all communicants in the archdiocese must receive in the hand due to the coronavirus.

The archbishop said in a statement earlier this week that “[g]iven the highly contagious nature of the flu and the coronavirus, communicants MUST [capitalization in the original] receive Holy Communion in the hand and not on the tongue.”

“I realize that there are some who prefer to receive Holy Communion on the tongue,” the statement continued. “However, during the flu season and given the possibility of being exposed  to the coronavirus, ALL [capitalization in the original] communicants are to receive Communion in the hand. What is important is that we receive our Blessed Lord in Holy Communion.

Conversely, the Catholic Archdiocese of Portland, Oregon, headed by Archbishop Alexander Sample, has issued guidelines saying a parish cannot ban the reception of Holy Communion on the tongue.

The archdiocese said it had consulted two physicians regarding the matter, one of whom was a specialist in immunology for the State of Oregon, and that they agreed that, done properly, the reception of Holy Communion on the tongue and in the hand pose a more or less equal risk.

“The risk of touching the tongue and passing the saliva on to others is obviously a danger however the chance of touching someone’s hand is equally probable and one’s hands have a greater exposure to germs,” the Portland archdiocese statement read.

A number of dioceses in France have already taken the step of banning Communion on the tongue while still allowing Communion in the hand. Bishop Joseph Galea-Curmi, auxiliary of Malta, also issued a directive to churches in the country banning Communing on the tongue “pending further directives.” In response to the coronavirus, Catholic authorities in Jerusalem, Singapore, the Philippines, England and Wales, and a number of dioceses in the U.S and other parts of the world have also issued either directives or guidelines in favor of giving Communion in the hand but not on the tongue.

Bishop Athanasius Schneider, while arguing that Communion on the hand actually carries a greater risk of passing on viruses than Communion on the tongue, has suggested that some Church authorities are using the coronavirus as a “pretext” to trivialize reception of Communion.

“It seems also that some of them have a kind of cynical joy to spread more and more the process of trivialization and de-sacralization of the Most Holy and Divine Body of Christ in the Eucharistic sacrament, exposing the Body of the Lord himself to the real dangers of irreverence (loss of fragments) and sacrileges (theft of consecrated hosts),” he said.

Last month, an African archbishop decreed that Catholics in his diocese must receive Holy Communion only on the tongue in order to promote reverence for the Eucharist and to stop “abuses.”

Moreover, Schneider, along with a number of Catholic priests and members of the Catholic laity, has argued that Communion on the hand, in fact, carries a greater risk of passing on viruses than Communion on the tongue.

“From a hygienic point of view,” the bishop stated, “the hand carries a huge amount of bacteria. Many pathogens are transmitted through the hands. Whether by shaking other people’s hands or frequently touching objects, such as door handles or handrails and grab bars in public transport, germs can quickly pass from hand to hand; and with these unhygienic hands and fingers people then touch often their nose and mouth. Also, germs can sometimes survive on the surface of the touched objects for days.

“According to a 2006 study, published in the journal ‘BMC Infectious Diseases’, influenza viruses and similar viruses can persist on inanimate surfaces, such as e.g. door handles or handrails and handles in transport and public buildings for a few days,” he said.

Schneider said nobody can “force” a Catholic to receive the Body of Christ in a way that “constitutes a risk of the loss of the fragments, and a decrease in reverence, as is the way of receiving Communion in the hand.”

He recommended making a Spiritual Communion rather than receiving Communion in a trivial manner.

In an article on this issue on the New Liturgical Movement website, Dr. Peter Kwasniewski highlighted a letter from the Congregation for Divine Worship and the Discipline of the Sacraments, dated July 24, 2009, the year of the “Swine Flu” pandemic.

The letter states that the faithful “always” have the right to receive Holy Communion on the tongue.

This Dicastery observes that its instruction Redemptionis Sacramentum (25 March 2004) clearly stipulates that “each of the faithful always has the right to receive Holy Communion on the tongue” (n.92), nor is it licit to deny Holy Communion to any of Christ’s faithful who are not impeded by law from receiving the Holy Eucharist (cf. n. 91).

Dr. Kwasnieski additionally cites four pertinent texts, all explaining that Catholic faithful should not be obliged to receive Communion on the hand rather than the tongue.

Letter of April 3, 1985, from the Congregation for Divine Worship to the National Conference of Catholic Bishops (Prot. 720/85):

The Holy See, since 1969, while maintaining the traditional manner of distributing communion, has granted to those Episcopal Conferences that have requested it, the faculty of distributing communion by placing the host in the hands of the faithful[.] … The faithful are not to be obliged to adopt the practice of communion in the hand. Each one is free to communicate in one way or the other.

Response by the Congregation for Divine Worship and the Discipline of the Sacraments, Notitiae (April 1999):

Query: Whether in dioceses where it is allowed to distribute Communion in the hands of the faithful, a priest or extraordinary ministers of Holy Communion may restrict communicants to receive Communion only in their hands, not on the tongue.

Response: Certainly it is clear from the very documents of the Holy See that in dioceses where the Eucharistic bread is put in the hands of the faithful, the right to receive the Eucharistic bread on the tongue still remains intact to the faithful. Therefore, those who restrict communicants to receive Holy Communion only on in the hands are acting against the norms, as are those who refuse to Christ’s faithful [the right] to receive Communion in the hand in dioceses that enjoy this indult.

General Instruction of the Roman Missal. Issued by the Congregation for Divine Worship and the Discipline of the Sacraments, November 12, 2002; U.S. edition 2011, n. 161:

If Communion is given only under the species of bread, the Priest raises the host slightly and shows it to each, saying, The Body of Christ. The communicant replies, Amen, and receives the Sacrament either on the tongue or, where this is allowed, in the hand, the choice lying with the communicant.

Redemptionis Sacramentum — Instruction on Certain Matters to Be Observed or to Be Avoided Regarding the Most Holy Eucharist, the Congregation for Divine Worship and the Discipline of the Sacraments, March 25, 2004, art. 92:

Although each of the faithful always has the right to receive Holy Communion on the tongue, at his choice, if any communicant should wish to receive the Sacrament in the hand, in areas where the Bishops’ Conference with the recognition of the Apostolic See has given permission, the sacred host is to be administered to him or her.

U.S.-based priest Fr. John Zuhlsdorf explained on his popular blog that based on his experience of “nearly three decades of distributing Communion in both ways,” he doesn’t believe that Communion in the hand is safer than Communion on the tongue.

The priest stated that a bishop “cannot require Communion in the hand at the Traditional Latin Mass.”

“The legislation of Summorum Pontificum is for the universal Latin Church and bishops cannot override it. The Instruction Universae Ecclesiae 28 says that Summorum Pontificum derogates from all liturgical law after 1962 that doesn’t agree with the laws of 1962.”

He said that if the coronavirus situation gets worse, so that there is “truly a great risk of contagion when out and around, A) you don’t have an obligation to fulfill and B) you don’t have to go to Communion to fulfill your obligation. You can make a spiritual Communion, since you are in the state of grace. Father could, in fact, opt not to distribute Communion.”