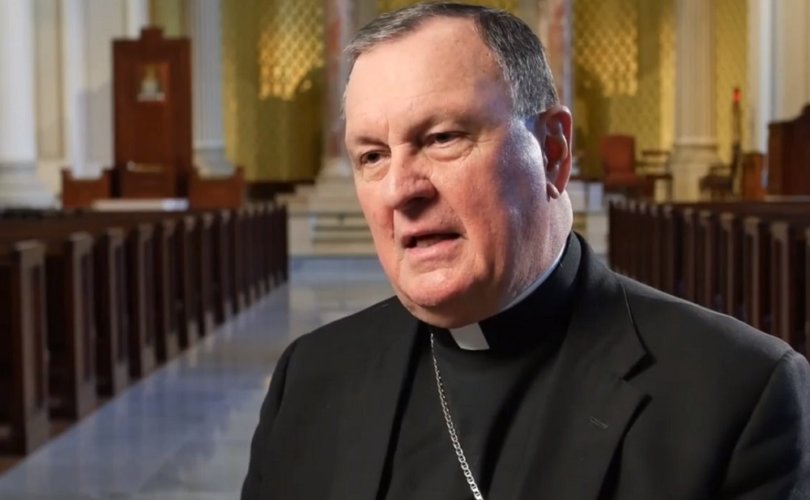 MOBILE, Alabama, June 2, 2020 (LifeSiteNews) — Archbishop Thomas J. Rodi of Mobile, Alabama, has warned his priests that they are not allowed to celebrate public Masses if they want to distribute Holy Communion on the tongue.

“If any priest cannot follow archdiocesan regulations, it will be necessary for him to refrain from the celebration of public Masses,” Rodi wrote in a May 20 letter obtained by LifeSiteNews (see full letter HERE). “This matter is too serious for us to take any other approach than one of extreme caution for the safety of others.”

Public Masses in the Archdiocese of Mobile began again on May 12. Prior to that, Archbishop Rodi had published detailed guidelines, already indicating that “[a]ny church unable to strictly fulfill these requirements may not have public Masses.”

At that time, Rodi did not explicitly prohibit the reception of the Eucharist on the tongue, nor did he prescribe reception in the hand. He only wrote, “Communicants are to maintain social distancing when receiving Communion from the priest.”

In his May 20 letter, however, he revealed the following: “Complaints have been received in my office that priests are not maintaining social distancing when distributing Communion and not sanitizing their hands after touching someone else.”

“Social distancing must be maintained during the Mass and the only way to maintain social distancing when distributing Communion is by the communicant receiving on the hand,” Rodi then declared.

In his guidelines, the only definition of social distancing was that “no one is to sit within 6 feet of one another unless living in the same household.”

Even if both the priest and the communicant stretch out their arms as far as possible, their bodies would most likely be closer together than six feet. Moreover, given that the priest needs to place the consecrated host into the hand of the person receiving, their hands are only fractions of an inch apart.

When distributing Holy Communion directly on the tongue, the priest does not touch the tongue itself or any part of the mouth. This was the custom for centuries, before disobedient priests and faithful started practicing Communion in the hand and pressuring the Vatican to officially allow it after the Second Vatican Council.

Archbishop Rodi ordered his priests to tell their parishioners “that for the time being no one is to receive Communion on the tongue.”

With this, he is directly contradicting the Thomistic Institute guidelines on the “Phased Restoration of Public Masses” recommended by the United States Conference of Catholic Bishops.

The Thomistic Institute is part of the Pontifical Faculty of the Immaculate Conception at the Dominican House of Studies in Washington, D.C. However, the guidelines were prepared not only by theologians, but also by medical experts, including Timothy P. Flanigan of Brown University, and Aaron Kheriaty of the University of California, Irvine.

According to the Thomistic Institute, receiving Holy Communion directly on the tongue is possible “without unreasonable risk.”

Archbishop Rodi seemed to make a passing reference to the instruction by claiming, “Standing before God now, our personal preferences and even our personal rights must temporarily yield to the Common Good.”

According to St. Thomas Aquinas, considered among the greatest theologians of the Church, the Eucharist is, in fact, the common good. “But the common spiritual good of the whole Church is contained substantially in the sacrament itself of the Eucharist,” he wrote in his Summa Theologiae.

Rodi continued, “It is not that we are forfeiting our rights but that we understand that love of God and neighbor are to guide our actions. Our regulations show love of neighbor by seeking to protect all at Mass.”

In his guidelines, he had also banned the use of kneelers and communion rails for receiving the Eucharist, as well as hymnals and “and other shared worship aids.”

Taking it even farther, Stika said that if people “make[] a scene” by wanting to receive Holy Communion on the tongue, “they will be asked to leave and not permitted to return [until] this passes.”

In 2009, the Congregation for Divine Worship and the Discipline of the Sacraments responded to a lay Catholic’s questions about restrictions on receiving Holy Communion on the tongue due to the swine flu.

“This Dicastery observes that its Instruction Redemptionis Sacramentum (25 March 2004) clearly stipulates that ‘each of the faithful always has the right to receive Holy Communion on the tongue’ (n. 92), nor is it licit to deny Holy Communion to any of Christ’s faithful who are not impeded by law from receiving the Holy Eucharist (cf. n. 91),” the letter affirmed.

“The Congregation thanks you for bringing this important matter to its attention. Be assured that the appropriate contacts will be made.”