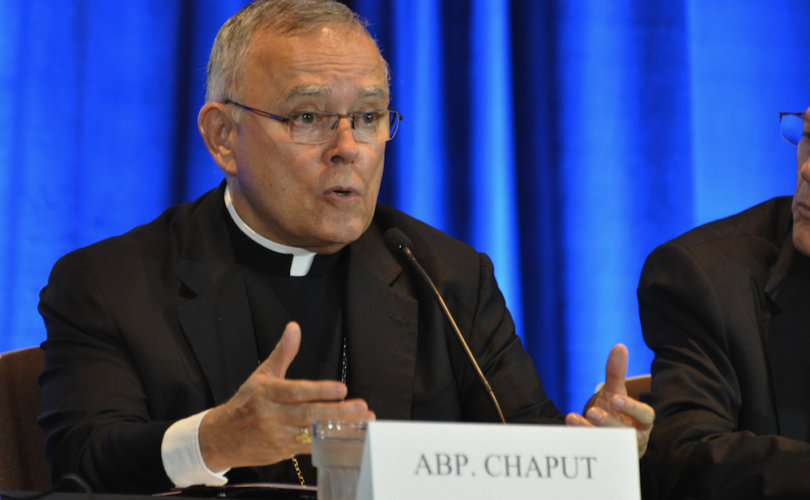 PHILADELPHIA, Pa., September 21, 2018, (LifeSiteNews) – In the run-up to the Vatican’s synod on youth, Archbishop Charles Chaput has shared a “respected” North American theologian’s anonymous analysis of the Vatican’s controversial working document which lays out the groundwork for the synod.

Archbishop Chaput said that while the many letters he has received from laypeople, clergy, theologians, and other scholars concerning the upcoming October synod praise the synod’s intent, nearly all “raise concerns of one sort or another about the synod’s timing and possible content.”

Five principal theological difficulties in the working document––known as the   “Instrumentum Laboris” (IL)––identified by the theologian “warrant much wider consideration and discussion as bishop-delegates prepare to engage the synod’s theme,” notes Chaput.

Archbishop Chaput cautioned that this is one person’s analysis and some may disagree.

Here are the five problematic areas the theologian identifies:

“The IL displays a pervasive focus on socio-cultural elements, to the exclusion of deeper religious and moral issues,” said the anonymous author.  “Though the document expresses the desire to “re-read” “concrete realities” “in the light of the faith and the experience of the Church,” the IL regrettably fails to do so.”

In other words, the foundation for the bishop’s synod ignores 2,000 years of accumulated wisdom of the Roman Catholic Church in favor of popular cultural trends which result in the trivialization and emasculation of Church teaching.

Regarding the array of sexual sin the world presents to young people today, including early sexual activity, multiple sexual partners, and digital pornography, “No mention is made about the disfigurement of the soul, its consequent spiritual blindness, and impact on the reception of the gospel by the one so wounded.”

“There is much discussion about what young people want; little about how these wants must be transformed by grace in a life that conforms to God’s will for their lives,” while “offering no meaningful reflection on spiritual, existential, or moral concerns.”

Stunningly, “The hope of the gospel is noticeably missing.”

2.  An inadequate grasp of the Church’s spiritual authority

“The entire document is premised on the belief that the principal role of the magisterial Church is ‘listening,’” says the author, opting “for dialogue as her style and method,” rather than teaching.  “The Church does not possess the truth but must take its place alongside other voices. Those who have held the role of teacher and preacher in the Church must replace their authority with dialogue.”

The author avers that the synod plan risks the Church abandoning her ministry of preaching, inverting the roles of those who teach––the priesthood––and those who listen––the laity.

The author goes further, suggesting that the “hierarchy itself would be inverted, and the ministerial priesthood would collapse into the baptismal priesthood.  In short, we would become Lutherans.”

It is common knowledge that adolescents from permissive households typically yearn for parents to care enough to set limits and give direction, even if they rebel against this direction. Similarly, the Church as mother and teacher cannot through negligence or cowardice forfeit this necessary role of setting limits and directing.

The IL fails to make any mention of the importance of the role the will plays in the life of each child of God, and instead reduces the human person to “intellect and desire,” “reason and affectivity.”

“The theological consequence of this glaring omission is extraordinarily important, since the seat of the moral life resides in the will and not in the vicissitudes of the affect.”

4.  A relativistic conception of vocation

The document gives the impression that “vocation” concerns nothing more than the individual’s search for private meaning and truth.  The author points to three paragraphs in particular in the IL which display a troubling allegiance to relativism:

5.  An impoverished understanding of Christian joy

Christian spirituality and the moral life are marginalized in favor of a sentimentalist conception of “joy.”

As presented in the IL, “Joy seems to be a purely affective state, a happy emotion,” while failing to describe joy as “the fruit of the theological virtue of charity.  Nor is charity characterized as the proper ordering of love, putting God first and then ordering all other loves with reference to God.”

“The theological consequence of this is that the IL lacks any theology of the Cross,” asserts the author.

Christian joy is not antithetical to suffering, which is a necessary component of a cruciform life. The document gives the impression that the true Christian will be “happy” at all times, in the colloquial sense. It further implies the error that the spiritual life itself will always result in felt (affective) joy. The pastoral problem that results from this comes to the fore most clearly in §137: Is it the role of the Church to make youth “feel loved by him [God]” or to aid them in knowing they are loved regardless of how they might feel?

“Besides the above considerations, there are other serious theological concerns in the IL,” says the anonymous theologian, including: “A false understanding of the conscience and its role in the moral life; a false dichotomy proposed between truth and freedom; false equivalence between dialogue with LGBT youth and ecumenical dialogue; and an insufficient treatment of the abuse scandal.”

The document has a preoccupation in advocating for the Church's role in “creating ‘responsible citizens’ rather than saints.”