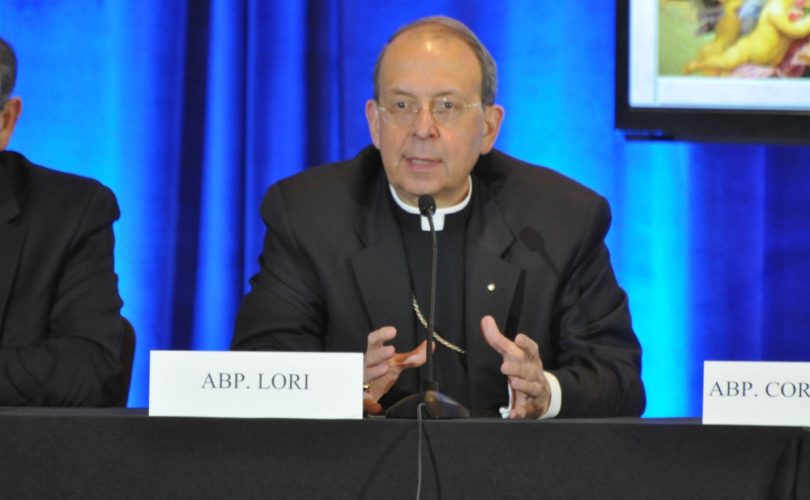 March 16, 2020 update: The March 18 protest outside Archdiocese of Baltimore offices against a retreat for homosexual clergy has been postponed. LifeSiteNews received the following message: “Due to the spreading coronavirus pandemic, we have to postpone the demonstration against a New Ways Ministry-sponsored retreat for ‘gay’ priests, deacons, bishops, and brothers in the Archdiocese of Baltimore at the Bon Secours Retreat Center on April 14-16.  However, we shall continue to pursue other means to convince Baltimore Archbishop William E. Lori to use his episcopal powers to prevent this retreat from happening (see Canon #764).”

BALTIMORE, Maryland, March 13, 2020 (LifeSiteNews) – After a group of concerned Catholics pressed their archbishop to cancel a scheduled retreat for “gay” bishops, priests, deacons, and religious brothers, the archdiocese has indicated that the shepherd lacks “zero authority” to do anything about the retreat, citing that it is being held off of diocesan property.

The archdiocese further indicated that a just-issued edict by the state’s governor calling for large gatherings to be canceled due to the coronavirus pandemic may have the unintended effect of canceling the retreat.

Archbishop William Lori of Baltimore was urged in a press release issued Wednesday to call off the event which is sponsored by New Ways Ministries (NWM), a pro-LGBT group condemned by the Vatican and the United States Conference of Catholic Bishops (USCCB). The retreat is scheduled to be led by Father Peter Daly, a retired priest of the Archdiocese of Washington, D.C. who has a history of advocating for homosexual clergy.

Titled “Love Casts Out Fear: Finding Courage to Speak Our Truth,” the retreat website proclaims the gathering is designed for the “gay men” who are “disproportionately present in the Catholic clergy.”

In subsequent communications between the group and Archdiocesan spokesperson Sean Caine, it became clear that Archbishop Lori does not want to go on the record against the retreat or New Ways Ministry.

“The Archbishop is aware of their concerns and has taken steps he feels are within the limits of his authority given the circumstances and canon law,” Caine said to the group via text messages that were obtained by LifeSiteNews.

When pressed to explain why Archbishop Lori doesn’t make some attempt to make a moral argument against the event despite the limitations of canon law, the group was told: “The government has more authority than we do.”

“[Archbishop Lori] publicly reiterated the church’s stance on New Ways Ministry and has made clear that the only acceptable ministry to same-sex attracted Catholics in this archdiocese is Courage,” insisted Caine, referring to an article published by the diocese a few days ago.  Yet the article did not once quote Archbishop Lori; none of the statements are attributable to him.

When challenged further, Caine said, “The point is that the Archbishop can jump up and down all day and say anything he wants but he has zero authority over a retreat held off diocesan property.”

“We all agree it’s wrong and causes confusion and shouldn’t be happening,” allowed Caine. “They are aware of the Archbishop’s concerns. However, if this mandate by the governor compels them to make a decision they otherwise wouldn’t make, it’s better than the alternative.”

As news spread of the Archbishop’s continued reluctance to use all means at his disposal to end the ‘gay’ clergy retreat, concerned Catholics have expressed their grave concern over his continued silence.

“Some are saying the retreat may be cancelled because of the coronavirus. The concern for physical health is laudable but concern for the destiny of souls should be greater,”  said Janet Smith, recently retired professor of moral theology at the Sacred Heart Major Seminary in Detroit, Michigan, in a statement to LifeSiteNews.

Smith said it was sad that authority apparently exists to cancel the retreat for “health reasons” but seemingly not to “protect souls.”

“I commend the laity of Baltimore who, for the sake of souls, have urged Archbishop Lori to use his powers to prevent the retreat from taking place and to make a strong public statement against it,” said Prof. Smith. “Laity do not like to oppose their leaders; we revere them, but it is long past time that the lavender mafia cease to have influence in the Church.”

Kevin Wells, author of The Priests We Need to Save the Church, told LifeSiteNews, “The priority for each American bishop, I believe, can be scaled down to a single consideration: ‘Anything that will further wound my already-disturbed and scattered flock must be eliminated.’”

“This ‘retreat’ must be eliminated,” declared Wells. “It is a cancer and great scandal to the sensibilities of faithful Catholics. Should the cancellation take place, Archbishop Lori, and all bishops for that matter, will begin to regain the moral authority that they have mostly lost. I love Archbishop Lori and pray daily for his leadership; I do believe he'll do the right thing and cancel.”

“As shepherds, it is no longer permissible to think and act like overly-cautious bureaucrats,” added Wells.  “It is time to resemble the courageous shepherd on the Irish hillside when the wolf approaches: He thinks, ‘I must protect; I must attack this danger to save my sheep.’”

“I don’t believe that Archbishop Bishop Lori’s canonical authority is the issue here,” said Dr. Jennifer Roback Morse, Founder and President of the Ruth Institute. “If he had wanted to, he could have put a stop to this retreat quietly, through back channels, long before it ever had the potential for public scandal.”

“What are we the faithful supposed to conclude from the fact that he has not put a stop to it?” asked Morse.

“Does the archbishop believe it is consistent with Catholic teaching to be a sexually active gay man in the priesthood?  Yes or no?” continued Morse.  “Does he support the organizers of the retreat?  Yes or no?”

Morse wondered if the Archbishop’s lack of leadership might be due to blackmail.

“Does the Lavender Mafia have something on him? If people assume the worst about Archbishop Lori, I fear he has only himself to blame,” she said.

Concerned Catholics are being urged to: