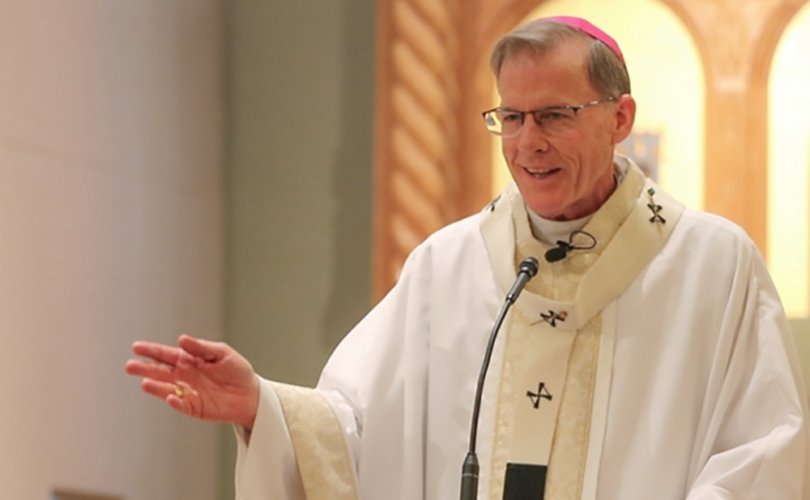 SANTA FE, New Mexico, August 18, 2020 (LifeSiteNews) — Priests in the Archdiocese of Santa Fe have been threatened with suspension if their homilies go over the prescribed five-minute limit set by the archbishop on account of his fears of the faithful being longer in church during the COVID outbreak.

Yesterday, British journalist Damian Thompson published a photograph of instructions from the vicar general of the Santa Fe archdiocese to priests. They contained a severe reproof to priests who have apparently been frightening the faithful by preaching for more than five minutes.

“We’ve received reports of some homilies going well over the 5 minute limit set by the Archbishop,” wrote Fr. Glennon Jones.

“This not only increases exposure time to others, but increases the discomfiture to many congregants, to the point of some not attending Mass because of it,” he continued.

“If such long homilies continue, the AB will consider severer [sic] actions for subject clergy, up to and including possible suspension of the faculty to preach.”

Thompson stated that this was “spectacular bullying of priests” on the part of Santa Fe archbishop John C. Wester.

“Does he really think preaching for more than five minutes is a health risk?” he added to his tweet.

Thompson later posted his frustration that the archdiocese had not responded to his attempts to determine if the document was genuine.

“I got this from a good source but it’s so ridiculous […] could it be a hoax? @ASFOfficial needless to say aren’t taking calls. Which if it’s a hoax is massively stupid because @ABJohnCWester’s reputation is on the line,” he wrote.

Although the archdiocese did not respond to LifeSiteNews’s requests for comment, a spokesperson did speak to the Catholic News Agency, confirming the authenticity of the document.

“The intent of Father Glenn Jones’ memo was to underscore the seriousness of the pandemic, Archbishop’s great concern for human life and the health and safety of our parishioners,” the official told CNA.

“Our parishioners have also been informed of the archdiocesan protocols and have expressed their concerns. Thus, our priests have been reminded to abide by the protocol of preaching only short 3–5 minute homilies during these perilous times.”

Wester is already a controversial figure thanks to his support of the Association of U.S. Catholic Priests (AUSCP). In 2018, Michael Hichborn of the Lepanto Institute noted that the AUSCP supports the diaconal ordination of women “among other abuses.” Wester is the episcopal moderator for the group and gave the keynote speech for the group’s virtual 2020 annual meeting. The AUSCP’s episcopal moderator since 2016, the archbishop allowed the group to have its 2018 meeting in Albuquerque.

“John Wester has been a warm presence for us,” said Fr. Jim Schexnader at the 2020 meeting. “A supporter and resource to us. Each assembly he has spent time with us and been open to all our hopes and struggles amid ministry in today’s Church and in our nation.”

In response to the Wuhan coronavirus pandemic, the ordinary of Santa Fe banned Communion on the tongue, denying that it was a more respectful way to receive the Eucharist and suggesting that it could transmit disease.

“Receiving Communion in the hand is every bit as respectful as receiving on the tongue,” he wrote in March.

“There is nothing ontologically preferable to receiving on the tongue,” he continued erroneously.

“I ask that we keep in mind the importance of receiving Holy Communion and that we do not allow a secondary consideration to prevent us from this most special gift that the Lord has given to us. People are dying from the flu and from COVID-19. I believe that this consideration as well as our other temporary liturgical procedures are part of our respect for the dignity and value of human life.”