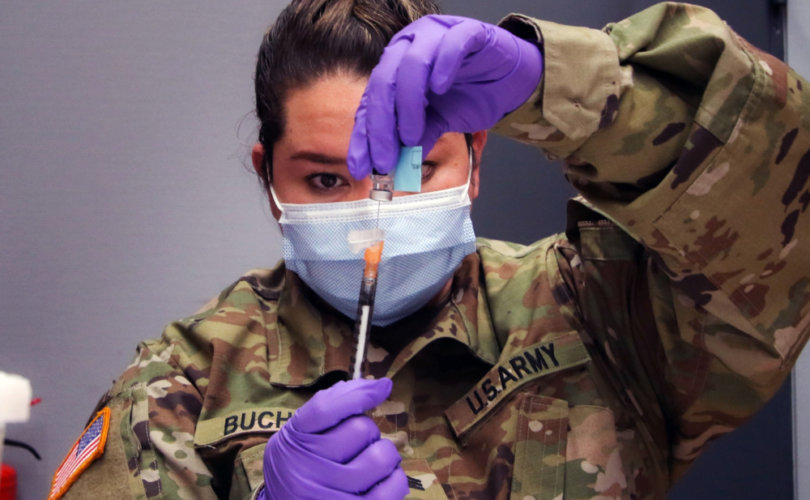 Army Sgt. Heidy Bucheli prepares a COVID jab for children at a US hospital in Germany.U.S. Army photo by Marcy Sanchez

WASHINGTON (LifeSiteNews) — The U.S. Army is set to immediately discharge soldiers who refuse to take one of the COVID-19 injections, according to a memo released by Secretary of the Army Christine Wormuth.

The policy, released February 2 and “effective immediately,” orders military commanders to “initiate involuntary administrative separation proceedings” for servicemen who have not taken a COVID jab, and who do not have a “pending or approved exemption request.”

The “involuntary separation policy” applies to the Regular Army. It also applies to reserve soldiers on active duty for more than 30 days; cadets at West Point and the United States Military Academy Preparatory School (USMAPS); and the Senior Reserve Officers’ Training Corps (SROTC).

Soldiers who are set to retire on or before July 1 of this year are exempt from the mandate, but must complete their retirement “as soon as practicable through expedited processes in lieu of involuntary separation.”

Wormuth, appointed as Army Secretary in May 2021, wrote that servicemen who are fired for refusing to comply with the mandate will not be eligible for “involuntary separation pay and may be subject to termination and recoupment of any unearned special or incentive pays.”

Furthermore, Wormuth’s memo states that a soldier fired under these conditions “may be required to repay the unearned portion of the pay or benefit in accordance with current policy and regulations.”

The latest official U.S. Army statistics as of January 26 note that 96% of active servicemen are fully vaccinated, as well as 79% of the reserves. Of the 709 medical exemptions requested, only 6 have been approved, and 656 rejected.

None of the 2,910 religious exemptions for the abortion-tainted injections have been approved. If an exemption request is denied, a soldier can appeal the decision, but the next decision is final.

The Army’s press release stated that six Regular Army leaders, including two battalion commanders, had been “relieved” over non-compliance with the jab mandate, and commanders had issued 3,073 general officer written reprimands to soldiers for refusing the jab.

In a later statement released to the press, Secretary Wormuth claimed that “unvaccinated Soldiers present risk to the force and jeopardize readiness. We will begin involuntary separation proceedings for Soldiers who refuse the vaccine order and are not pending a final decision on an exemption.

LifeSiteNews contacted the Army press office for further comment, but received no reply

The U.S. Navy announced recently that it had begun discharging service personnel for refusing the jab, at the time meaning that out of the entire U.S. Military, only the Army had not done so. Of the 3,228 religious exemption requests made, the Navy has not accepted any so far.

Back in August 2021, U.S. Secretary of Defense Lloyd Austin ordered all U.S. service personnel to submit to the Pentagon’s COVID jab mandate, ordering that commanders “impose ambitious timelines for implementation,” claiming that injecting the U.S. forces “will save lives.”

Austin’s mandate came two days after the FDA approved a biologics license application for the Pfizer Cominarty vaccine Aug. 23, while leaving the Pfizer/BioNTech vaccine under Emergency Use Authorization — an event which has been falsely reported as the Pfizer/BioNTech jab receiving full approval.

Sen. Tom Cotton (R-AR) characterized the military mandate back in December as a move which would damage “national security.”

Kicking thousands of young, healthy troops out of the military over the vaccine mandate hurts our national security.

All because President Biden is trying to restore his political standing.

Speaking as part of the recent Truth for Health Foundation’s conference exposing COVID-related tyranny within the ranks of the military, a U.S. Army Chief Warrant Officer of 20 years said that from the top down “service members from every branch have been coerced, bullied, and threatened” if they don’t take the COVID jab.

The refusal of such exemptions and the push for jab mandates “violated Constitutional rights of sailors,” added Naval Commander Rob Green, who recently told LifeSiteNews how he was demoted for refusing to comply with the jab mandate.