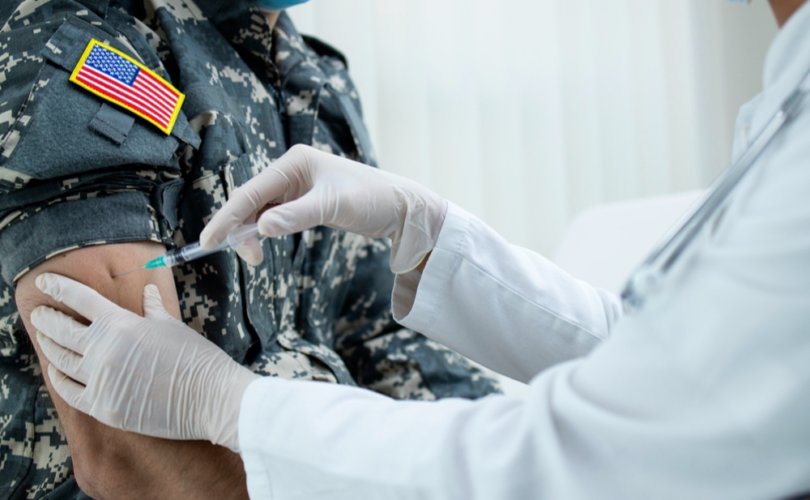 (LifeSiteNews) — A U.S. army doctor who suffered from a COVID vaccine injury was fired for informing his soldiers about potential side effects from the jab.

Dr. Peter Chambers described his ordeal in an exclusive March 25 interview with Steve Kirsch, founder of the COVID-19 early treatment fund (CETF) and of the Vaccine Safety Research Foundation (VSRF).

Chambers was serving as a taskforce surgeon for Operation Lone Star, the military border assignment between Texas and Mexico, when he started noticing vaccine injuries among the soldiers he treated.

As the proportion of vaccinated soldiers started increasing from 28% to about 30-35%, Chambers noticed serious adverse events such as neurological disorders, strokes, pulmonary embolisms, cerebral bleeds, and other injuries.

“I had six soldiers throughout that period of time [who] ended up in the ICU,” he said.

Chambers himself had an adverse reaction to his Moderna COVID vaccine and now suffers from demyelination, a condition affecting the central nervous system caused by the injection.

“I was fortunate in that mine was a lesser [event], but it’s a neurological event – it affected me with vertigo, instability etc.,”

Chambers reported what he saw to his superiors.

“I [reported] to the sergeant above me, saying, ‘Hey, there’s a lot of people having some adverse reactions to these shots.’”

His superiors, however, dismissed his findings.

“Prior to them being vaccinated, they had to sit through my informed consent briefs,” Chambers explained.

The army surgeon recalled that out of 3,000 soldiers who went through his sessions, only 6 ended up taking the jab.

Chambers used official government data from the CDC and VAERS to show the extent of adverse events from the COVID vaccines, particularly among young people.

This earned him the ire of his general, who complained about Chamber’s small number of vaccinated soldiers and ordered him to stop giving his informed consent briefs.

“I had to say to him eye to eye: ‘Sir, this is an unlawful order, and I will not follow that order,’” Chambers told Kirsch.

The army surgeon referred to Army Regulation 40-562 which states in chapter 8, paragraph 5, that “any recipient of an EUA vaccine or chemoprophylaxis product must receive the information (for example, briefing, individual counselling, information statements) required by the FDA-approved EUA” and that “full compliance with this requirement is critical.”

“He had the surgeon fire me,” Chambers recalled.

Following this incident, the doctor testified at a March 10 federal court hearing in Tampa in the Navy SEAL 1 v. Austin  case. Chambers went to defend the preliminary injunction Judge Steven Merryday had granted for two plaintiffs who had filed a complaint against the military jab mandate.

Testifying before the court, Chambers said he had been pressured into getting soldiers vaccinated and presented as an exhibit, an instruction on religious exemptions that read: “Soldiers will try. Soldiers will fail.”

“If we don’t stop this thing our military is going to be decimated. They’re destroying our soldiers. They tried to destroy me,” said Chambers in conclusion to his interview with Kirsch.

When asked by Kirsch who he meant by “they,” Chambers said he was referring to U.S. Secretary of Defense Lloyd J. Austin.

“I would say this comes from the number one guy, Lloyd Austin,” he said.

“Do you think Lloyd Austin realizes that the vaccines are unsafe, and all he’s doing is making sure that he doesn’t get fired by following orders from the White House?” Kirsch then asked Chambers.

“And I think that excuse was used at Nuremberg [by] those doctors.”

Together, they reviewed the DOD’s Defense Medical Epidemiology Database (DMED), which is the military equivalent to the federal government’s Vaccine Adverse Event Reporting System (VAERS) and discovered that other soldiers had also developed a demyelination disease after receiving COVID shots.

Testifying at the hearing, Long said that on the eve of the hearing, she had been pressured not to discuss her findings regarding military medical data.

“I went first because the night before, Theresa was called by her commander and was told: ‘You will not testify!’ That’s witness tampering,” said Chambers.

Long, though “fearing for [her] life and for the safety of [her] children,” still testified at the Tampa hearing.

“I have so many soldiers being destroyed by this vaccine. Not a single member of my senior command has discussed my concerns with me,” she said.

“I have nothing to gain and everything to lose by talking about it. I’m OK with that because I am watching people get absolutely destroyed.”

Theresa Long is a senior U.S. army aerospace medicine specialist who also testified at an expert panel on vaccine injuries organized by U.S. Sen. Ron Johnson of Wisconsin on November 2 in Washington, D.C.