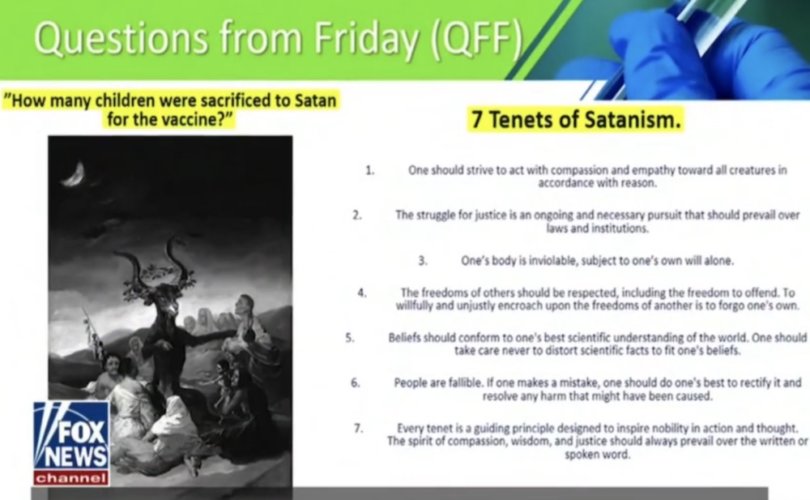 While Austin said at the time the mandate was “necessary to protect the Force and defend the American people,” Carlson suggested its actual purpose was “to identify the sincere Christians in the ranks, the free thinkers, the men with high testosterone levels, and anyone else who doesn’t love Joe Biden, and make them leave immediately.” He then dropped the detail that has garnered the segment most of its attention so far.

“We just obtained a PowerPoint that the Army is using to justify mandatory vaccines to the troops. In it, is the sympathetic portrayal of Satanism. ‘How many children were sacrificed to Satan because of the vaccine,’ the slide reads, apparently sarcastically. The presentation then proceeds to list the so-called ‘tenants of Satanism,’ which are taken straight from the ‘temple of Satanism’ website.

TST is a far-left secular advocacy group best known for filing lawsuits against various state pro-life laws, and says it embraces Satan as a “symbol of the Eternal Rebel in opposition to arbitrary authority,” but does not believe he literally exists. The “seven fundamental tenets” from TST’s website read as follows:

One should strive to act with compassion and empathy toward all creatures in accordance with reason.

The struggle for justice is an ongoing and necessary pursuit that should prevail over laws and institutions.

One’s body is inviolable, subject to one’s own will alone.

Beliefs should conform to one’s best scientific understanding of the world. One should take care never to distort scientific facts to fit one’s beliefs.

People are fallible. If one makes a mistake, one should do one’s best to rectify it and resolve any harm that might have been caused.

Every tenet is a guiding principle designed to inspire nobility in action and thought. The spirit of compassion, wisdom, and justice should always prevail over the written or spoken word.

“So here you have the U.S. Army doing PR for Satanism,” Carlson quipped. The full, exact meaning intended by the slide is not entirely clear, but at a minimum it appears to be mocking religious aversion to the COVID-19 vaccines — which were developed and/or tested with the use of fetal cells from aborted babies — while casting the views of “Satanists” as more enlightened.

“We called the Army about this today. They conceded the PowerPoint is real, troops saw it, but it was somehow ‘not approved by army leadership,’” Carlson added. “They did not explain how that works, or what they’re going to do about it.”

While mandate defenders are quick to point out that the military has long required soldiers to vaccinate against a range of diseases, the fact remains that previous vaccines were subjected to far more evaluation and development time before being put into widespread use than the Pfizer, Moderna, or Johnson & Johnson COVID shots receive during their accelerated clinical trials.

While cases of severe harm reported to the federal Vaccine Adverse Events Reporting System (VAERS) after taking COVID vaccines represent less than one percent of total doses administered in the United States, a 2010 report submitted to the U.S. Department of Health & Human Services’ (HHS) Agency for Healthcare Research and Quality (AHRQ) warned that VAERS caught “fewer than 1% of vaccine adverse events.” On the problem of underreporting, the VAERS website offers simply that “more serious and unexpected medical events are probably more likely to be reported than minor ones” (emphasis added).

This past May, NBC News published a report acknowledging experts’ concerns about “gaps” in federal monitoring of the COVID vaccines. While the government currently relies on a “hodgepodge” of sources for safety data, the report explained, the quoted experts call for a more “robust ‘active’ surveillance system [that] can search large volumes of patient care records to compare rates of adverse events in people who received vaccines with those who didn’t.”

Further intensifying the above concerns is a Project Veritas report released Monday, which shows insiders at Phoenix Indian Medical Center speaking candidly about serious medical complications they’ve seen after COVID vaccination that are not being reported.

Acknowledging the COVID vaccines’ potential dangers would severely undermine the Biden administration’s heavy investment in the narrative that the vaccines are the key to ending the pandemic.

Earlier this month, President Joe Biden announced that private companies with 100 or more workers will be required to mandate either vaccinations or weekly testing. So far, more than 20 Republican-controlled states have said they are planning or exploring lawsuits against the Biden vaccine mandate.

LifeSiteNews has also prepared a resource to help readers facing such mandates at work pursue and defend religious, medical, or conscience exemptions.