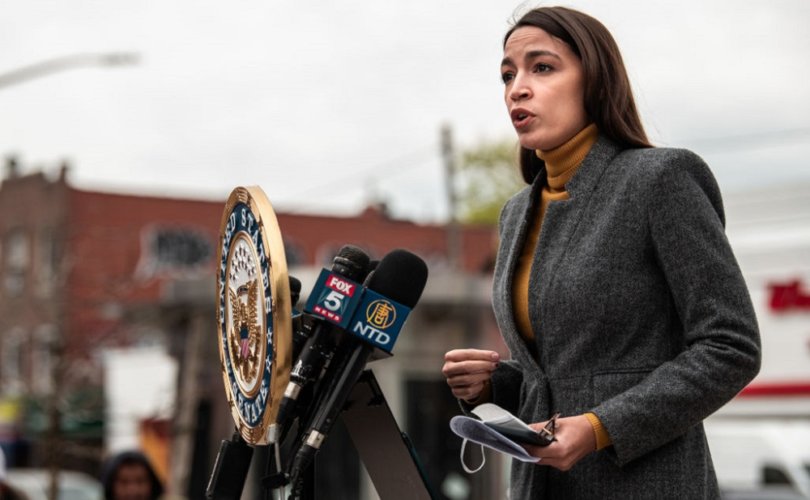 WASHINGTON, D.C., August 3, 2020 (LifeSiteNews) — After U.S. House member Alexandria Ocasio-Cortez — popularly known as AOC — criticized Saint Damien of Molokai as an example of colonialism and white supremacy, a U.S. bishop said her claim is “crazy and outrageous,” “ridiculous and insulting.”

In an Instagram video posting, AOC incorrectly claimed that St. Damien was a “colonizer,” and his statue’s inclusion in the U.S. Capitol’s Statuary Hall is “what patriarchy and white supremacist culture looks like!”

The New York congresswoman experienced a swift backlash from Catholics.

“AOC calls the statue in the US capitol building of Father Damien, a canonized saint in the Catholic Church, a part of ‘white supremacist culture,’” said John Robert Gage in a tweet that displayed AOC’s words over a video of St. Damien’s statue.

“Father Damien died of leprosy after spending his life serving others who had the disease,” noted Gage.

. @AOC calls the statue in the US capitol building of Father Damien, a canonized saint in the Catholic Church, a part of “white supremacist culture.”

Father Damien died of leprosy after spending his life serving others who had the disease. pic.twitter.com/NVnfCN7EVK

Los Angeles bishop Robert Barron said he felt the need to respond to AOC’s claim because it “was just so outrageous.”

“Did she have any idea who Damien of Molokai was?” wondered Bishop Barron in a pair of video tweets.

Friends, I made this quick video in response to @AOC. In defense of St. Damien of Molokai: Part 1 pic.twitter.com/Wj92fPBxbs

“This Belgian man who becomes a priest — a member of a missionary order — he goes mid-nineteenth century to Hawaii, works there for several years, and then volunteers to go to the island of Molokai, which at the time was a place where lepers were sent. And at the time there was no treatment, no cure,” explained Barron. “Those who had the disease were simply sent there to spend the rest of their lives, and they would die there.”

“To associate this man in any way with colonialism or white supremacy is so ridiculous and insulting, and it shows the superficiality and the simplistic quality of these sort of woke categories,” said the bishop.

Delivering a knockout punch to AOC, American Thinker’s Monica Showalter showed a picture of Damien after the saint had contracted leprosy and asked, “Here he is — look like a white supremacist to you?

Photo of Fr. Damien taken in 1888, not long before his death.
Hawai’i State Archives in Honolulu, Hawaii.

Fr. Damien: A poor, sick immigrant, not a white supremacist

“The statue AOC objects to as a totem of white supremacy is a statue of a poor, sick immigrant social worker to the poor, whose work was honored by Hawaii's native queen,” wrote the Washington Examiner’s Timothy Carney. “The statue was created by an immigrant woman feminist artist of color, and chosen by the people of the least white state of the union.”

Carney called AOC’s words a “tirade,” noting that “[a]s far as St. Damien being a “colonizer” — well, Hawaii was never a Belgian colony. He wasn’t there representing Belgium, either. He was there representing the Congregation of the Sacred Hearts of Jesus and Mary.”

“Any Hawaiian here who is aware of their history — which most Hawaiians are — would absolutely, Catholic or not, defend the legacy of Damien as a man who was embraced by the people, and who is a hero to us because of his love for the Hawaiian people,” Dallas Carter, a native Hawaiian and a catechist for the Diocese of Honolulu, told CNA.

“We did not judge him by the color of his skin. We judged him by the love that he had for our people,” said catechist Carter.

“Alexandria Ocasio-Cortez picked the wrong statue to criticize,” declared the headline for Matthew Walther’s article at The Week.

“Ocasio-Cortez is probably not aware of the fact that the statue of the saint is a replica of one that stands outside the Hawaii State Capitol in Honolulu, that he spoke and preached in the Hawaiian language, that his feast day is a holiday in Hawaii, or that he is routinely named in lists of the most admired figures in modern Hawaiian history,” wrote Walther.

American Thinker’s Showalter referred to AOC as a “far-left wokester congresswoman” who had aimed an “amazing insult” at “Hawaii’s patron saint and most beloved figure of honor.”

“What she was trying to do was pigeonhole the same flawed narrative of Confederate statues being unworthy to stand based on the legacy of slavery, onto Hawaii’s beloved chosen saint,” observed Showalter. “And she was also trying to erase Hawaii’s history, a truly disgusting thing given the special state’s many worthy figures, and given how little people know of it.”

“Now that it didn’t go over well, she’s saying nothing, expecting it will blow over. But it shouldn’t blow over,” said Showalter. “She owes the Hawaiians an apology and she’s not giving it. Let this be one more reason for Hawaiians to reconsider voting for Democrats. Ocasio-Cortez is exactly what’s wrong with them.”

The official website of the office of The Architect of the Capitol praises St. Damien of Molokai’s selfless service:

On May 10, 1873, Father Damien traveled with Bishop Maigret and a shipload of lepers to Molokai. After two days Damien was willing to devote the rest of his life to the leper settlement. The bishop replied that he could stay as long as his devotion dictated. Father Damien accomplished amazing feats while residing on Molokai. Six chapels were built by 1875. He constructed a home for boys and later a home for girls. He bandaged wounds, made coffins, dug graves, heard confessions, and said Mass every morning. In December 1884, Father Damien noticed severe blisters on his feet without the presence of pain. As he suspected, the disease was leprosy.

Father Damien died peacefully on April 15, 1889, on Molokai after 16 years of undaunted dedication.

On October 11, 2009, Father Damien was canonized (i.e., elevated to sainthood) by Pope Benedict XVI in a ceremony at the Vatican, thus becoming Saint Damien.

“The bronze statue is based on photographs taken of Father Damien near the end of his life, with the scars of his disease visible on his face and his right arm in a sling beneath his cloak,” explains The Architect of the Capitol’s description. “His broad-brimmed hat was traditionally worn by missionaries. His right hand holds a cane.”

Why the ongoing attack on Catholic saints?

“What is it with this attack on Catholic saints?” asked Bishop Barron in his second video  tweet, drawing attention to the attacks on statues of Junípero Serra up and down the California coastline, where the saint had preached.

“I just wanted to say something, everybody, to counteract what I think is just a colossally misguided attack on this enormously important figure, who I hope would be reverenced by anybody, of any race, of any background and any creed, would see in Damien of Molokai nothing but a great hero,” said Barron. “I think it’s time to get beyond these simplistic categories and start seeing people in their moral heroism.”