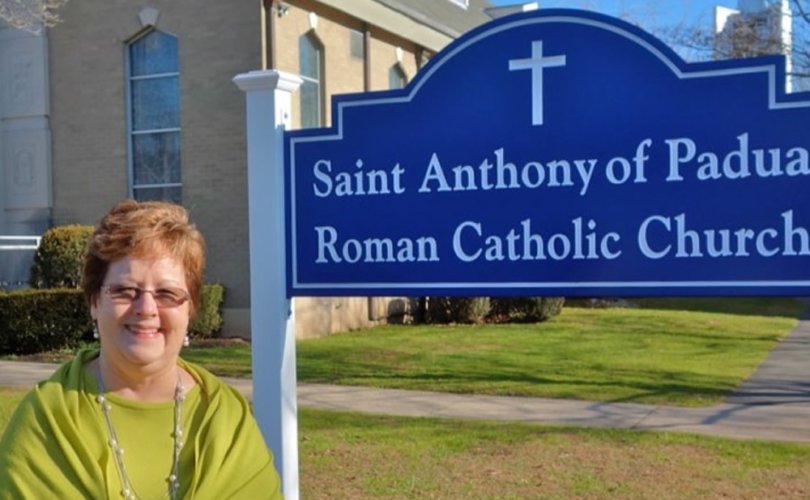 FAIRFIELD, Connecticut, December 13, 2018 (LifeSiteNews) – Bridgeport, Connecticut Bishop Frank Caggiano has appointed a left-leaning feminist laywoman to lead a parish rather than appointing a priest as pastor.

Dr. Eleanor W. Sauers will assume the role of “parish life coordinator” of St. Anthony of Padua Parish in Fairfield, effective January 1 of next year.

She will have “decision-making authority in the parish” and “oversee the day-to-day operations of the parish” as she has done the last several months.

“Her responsibilities, as it is with any priest or deacon appointed as Administrator, is to work with the parish community to develop and foster its pastoral vision and mission,” Caggiano told parishioners in a December 9 letter announcing “a new leadership model” at the parish.

Sauers will work with a team of priests who will provide the sacraments at St. Anthony.

Sauers’ appointment comes nine months after the death of the parish’s pastor Father John Baran, and also after “a great deal of time in prayer and discernment,” Caggiano said.

Caggiano, who was one of the first U.S. bishops to reinstate the St. Michael Prayer in his diocese in response to the Church’s sex abuse scandal, was a delegate at the recently concluded Youth Synod, where some have said the role of women in the Church was used to advance feminism in the Church.

He has been floated as a possible successor to Washington, D.C. Cardinal Donald Wuerl.

Caggiano said of Sauers in the letter, “Her education, formation, and experience make her professionally, academically, and spiritually ready for this role.”

Sauers, who has a Doctorate in Philosophy from Jesuit-run Fordham University, has written in favor of reducing the role of the pastor, taken part in a dissident-presented event on women in the Church, and worked to transform a parish where she was employed from being tradition-minded to modernist.

The latter experience was the basis for her dissertation, in which she wrote that she hopes that “feminist sensibilities can be integrated into the Catholic tradition.”

Caggiano told parishioners that having a parish life coordinator is supported in canon law. And while it’s the first time for a laywoman in his diocese, he said, there is precedent in other U.S. dioceses.

“My decision to ask Eleanor to take on this model of ministry, the first of its kind for a lay woman in this Diocese, is based on several factors,” he said. Aside from this having been done in other places, Caggiano listed his reasons for appointing Sauers as “the uniqueness of this parish community,” and his “deep appreciation for the work that Eleanor has already done” in the Bridgeport diocese.

“We are at a very particular moment in the history of our Diocese, and indeed, within our Church,” Caggiano said, continuing on that it had “become apparent to me that many lay women and men are seeking new ways to serve their parishes, and, in collaboration with the clergy, to create vibrant and thriving communities.”

While Caggiano did not cite the priest shortage in the Catholic Church among his reasons for appointing Sauers, varying alternatives to fostering vocations have been put forth in response to the shortage along with lay leadership in parishes, such as married priesthood and women’s “ordination.”

The appointment and new leadership model was covered in a report from Church Militant (CM), which noted the similarity to a plan for “priestless parishes” proposed by the Association of United States Catholic Priests (AUSCP), a dissident priest organization.

She wrote a book review in 2017 in which she applauded the thought of reducing the role of the pastor while instituting a “shared leadership.”

Shortly thereafter, Sauers participated in an event called “A Woman’s Place is in the Church,” presented by Voice of the Faithful. The group advocates change in the Catholic Church’s governance, and was censured by then-Bridgeport Bishop William Lori in 2002, and also by Detroit Archbishop Allen Vigneron in 2011.

In 2002, she followed Fr. Baran to St. Anthony from his previous parish assignment. Baran made her director of religious education a few months after.

The dissertation is contemptuous in its description of the parish’s life before 2002, the CM report says. Sauers termed it “simple,” “child like,” “clericalist,” “authoritarian,” “didactic,” “pre-critical,” “exclusivist,” “dualistic,” “rigid,” and “harsh.”

She had also recoiled at previous pastors’ reluctance to permit Holy Communion in the hand, lay people distributing Holy Communion, or female lectors.

“The parish presented itself to the world as an anachronism, a throwback to its earlier incarnation,” Sauers wrote, “out of step with the times, and with the greater church. Instead of opening the windows to a consideration of the roles of human experience, critical thinking, and dialogue in the life of faith, the doors were closed firmly against anything that might threaten the certainty of the Truth that was assumed to be self-evident.”

She identified herself as a “white, middle class, Roman Catholic woman feminist,” in the paper, and indicated a desire to instill feminist ideologies in parish life via leadership of selected members of the parish council.

“It is the assertion of the researcher (Sauers) that employing feminist thought can assist in creating environments within which contemporary Roman Catholics are able to find meaning and sustenance as they navigate their personal and communal lives,” she wrote.

Sauers also compared herself and two parish leadership partners to the Holy Trinity in the thesis, CM says, and cited feminist theologian Sr. Elizabeth Johnson, whose writing has been rebuked by the U.S. Bishops’ Doctrine Committee, and Vatican-rebuked Sr. Margaret Farley.

In addition to a display of ambition for authority, the report says, Sauers writes with scorn in her paper about the Catholic traditions of Eucharistic adoration, the Fatima novena, and other regular Catholic practices.