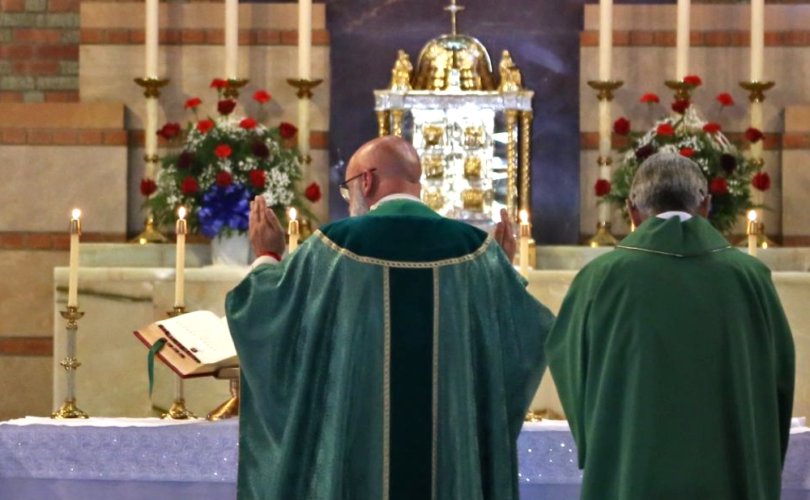 July 26, 2019 (LifeSiteNews) – Bishop James Wall of the Diocese of Gallup, New Mexico, announced this week that he will begin celebrating a regular Sunday Mass at his cathedral ad orientem — facing with the people — each week, and encouraged the priests of his diocese to also begin the practice.

“Ad orientem worship is …. a very powerful reminder of what we are about at Mass,” Bishop Wall said, “meeting Christ Who comes to meet us.”

“Practically speaking, this means that things will look a bit different,” the bishop explained, “for at such Masses the priest faces the same direction as the assembly when he is at the altar.”

“More specifically, when addressing God, such as during the orations and Eucharistic Prayer, he faces the same direction as the people, that is, toward God (ad Deum),” Wall said. “He does so literally, to use a phrase dear to Augustine, by “turning toward the Lord” present in the Blessed Sacrament. In contrast, when addressing the people, he turns to face them (versus populum).”

“Prayer and worship “toward the East” (ad orientem, oriented prayer) “is, first and foremost, a simple expression of looking to Christ as the meeting place between God and man,” Wall said, citing then Cardinal Joseph Ratzinger in The Spirit of the Liturgy. “It expresses the basic Christological form of our prayer. […] Praying toward the east means going to meet the coming Christ.”

Wall announced in a July 22 letter that the 11 a.m. Sunday Mass at the Cathedral of the Sacred Heart in Gallup will be celebrated ad orientem.

“This provides the faithful with the opportunity to attend the Mass in this way – indeed, in this way which is still approved and generously allowed by the Church,” he stated. “This is also a practice I would like to encourage throughout the Diocese of Gallup.”

“I believe it is pastoral to offer Masses both ad orientem and versus populum,” Wall said, “so that, together, we can all be exposed to the varied riches of the Church and Her prayerful history.”

Versus populum means “toward the people.”

Ad orientem worship had been the common orientation for the Mass for more than 1,500 years until Vatican II in the 1960s, when priests began to take it upon themselves to turn around to face the congregation.

At a 2016 liturgy conference in London, Cardinal Robert Sarah, prefect of the Congregation for Divine Worship and the Discipline of the Sacraments, asked all priests and bishops to readopt the ad orientem posture at Mass, and encouraged Catholics to receive Communion kneeling.

Sarah’s request was quickly played down by the Vatican and the US Bishops’ Conference, and roundly criticized by some. It has been actively ignored by most and purposefully hindered by others.

Only a few bishops have honored the request.

The month following Sarah’s request Cardinal Raymond Burke strongly endorsed it, saying he was in complete agreement with Sarah.

“Celebrating Mass ad orientem is one of the most ancient and most consistent practices in the life of the Church,” Wall explained in the letter to his diocese. “It is part of how the Church has always understood the proper worship of God.”

This also means that versus populum worship is extremely new in the life of the Church, he continued, and while a valid liturgical option, it still must be viewed as “novel” as related to celebration of the Mass.

Wall went on to dispel some misrepresentations of ad orientem worship, including the objection that the priest has his back to the people, which, the bishop said, “largely misses the main point, which is one much grander and more beautiful.”

“Ad orientem worship shows, even in its literal orientation, that the priest and the people are united together as one in worshipping God, even physically with their bodies,” said Wall.

Celebrating Mass ad orientem, Wall said, is meant to remind us of important factors of our faith, such as the Trinity, the resurrection, and how, in the words of Cardinal Ratzinger (Feast of Faith), “every Mass is an approach to the return of Christ.”

“Ultimately,” Wall added, “that the Mass is not first and foremost about us, but rather about God and His glory—about worshipping Him as He desires and not as we think best.”

“It is His work after all, not ours,” he said, “and we are simply entering into it by His gracious will.”

Wall also corrected the misconception that Mass celebrated ad orientem had been disallowed by the Second Vatican Council.

“This is not accurate,” stated Wall, “as none of the conciliar documents even mention this.”

“Additionally, a close reading of the rubrics of the Roman Missal will still show today that ad orientem is assumed to be the normal posture at Mass,” he explained, “they often describe the priest “turning to face the people,” which implies he is facing the altar before and after doing so.”

Wall quoted the writings of Pope Benedict XVI a number of times in his letter to illustrate the foundation and theology of ad orientem worship, but also to demonstrate his reasoning for beginning to incorporate it into the Mass at his cathedral and in his diocese.

He opened his letter referencing Benedict’s essay, released in April, ‘The Church and the scandal of sexual abuse,’ in which the retired Holy Father addressed how the Eucharist has been devalued.

Wall called Benedict’s letter “powerful,” and said that, “we have become too lax in our approach to the Eucharist.”

Celebrating Mass ad orientem is one of several ways to better “respect the Most Blessed Sacrament of the Eucharist, ” he said.

Wall also encouraged arriving early to prepare for Mass in prayer, remaining after Mass to offer an Act of Thanksgiving, dressing appropriately for Mass, keeping the one-hour Eucharistic fast, going to Confession regularly and reverent reception of Holy Communion.

The bishop acknowledged this can be a contentious topic, and that making changes to the way we pray can be difficult, especially in the liturgy, stressing that he is in no way trying to disrupt the way the people of the diocese pray.

“Rather, I am trying to open the treasury of the Church’s patrimony,” Wall said, “so that, together, we can all experience one of the most ancient ways that the Church has always prayed, starting with Jesus and reaching even to our own day, and thereby learn from the “ever ancient, ever new” wisdom of the Church.”

Wall had also instituted the process to restore the ancient order of the Sacraments of Initiation in his diocese in February; that is Baptism, Confirmation and then Eucharist.