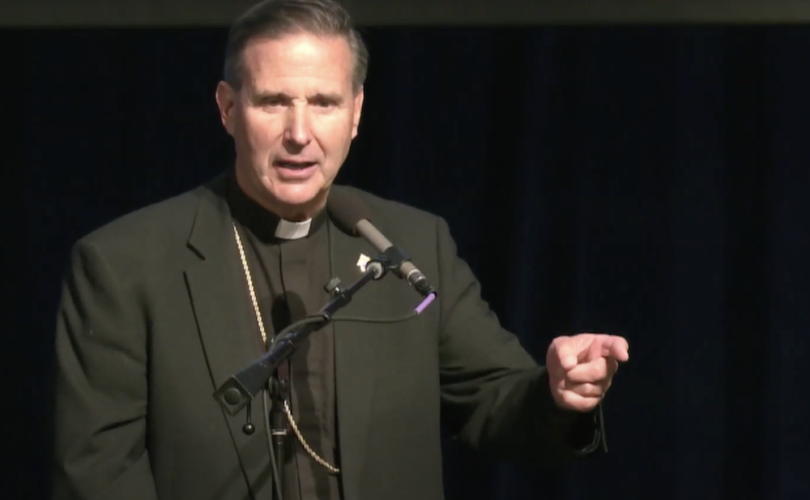 (LifeSiteNews) – A U.S. Catholic bishop who is also a decorated Navy chaplain has spoken out to vouch for the “incredible” character of his old friend Mark Houck, including his “heroic” toughness and courage, declaring “with great sincerity” that Merrick Garland’s Department of Justice (DOJ) “picked the wrong guy to mess with.”

Bishop Joseph Coffey, who was ordained in 2019 to serve as an auxiliary bishop in the Archdiocese for the Military Services, is well-known in pro-life circles for his dedicated activism in defense of preborn children who are threatened by abortion.

In a video testimony highlighted on yesterday’s episode of The John-Henry Westen Show, Bishop Coffey estimated that he has known Houck for “about 35 years” before he himself had entered the seminary in the early 90s and called Mark “an incredible guy.”

Houck, a pro-life sidewalk councilor, was subjected, with his wife and seven young children, to a terrifying raid by 20-30 FBI agents in the early morning hours September 23 which caused a national and political uproar.

Describing the eastern Pennsylvania author and lecturer, Coffey said “he’s incredibly compassionate and motivated and dedicated and heroic and courageous. All the things you want to be [if you’re] a husband, a father, [or] a friend.”

Having grown up in Philadelphia himself, Coffey identified Houck as “a leader in the Philadelphia pro-life community for many, many years.” He highlighted the work of Houck’s apostolate The King’s Men which has endeavored to extract men from pornography addiction, and the organization claims to have also successfully affected “the closure of more than 20 sexually oriented businesses.”

It has also been reported that Houck has likely been personally responsible for saving approximately 100 children, with their mothers and fathers, from the scourge of abortion.

Going on to emphasize the great work Houck does in sponsoring father and son “Into the Wild” retreats, Bishop Coffey said, “I have great respect for him. He’s a tough guy. I know he played football in college, and I know he’s worried about his wife and children.”

“But what I can say, with great sincerity, is that they picked the wrong guy to mess with,” he concluded.

Bishop Coffey has been an advocate for the unborn for over 47 years. As a boy, following the now overturned U.S. Supreme Court Roe v. Wade decision, his parents often took their nine children to pro-life demonstrations. After college, he joined the rescue movement before discerning his priestly vocation. Now, having served almost 20 years as a military chaplain and having been consecrated a bishop, he remains active in pro-life activism.

Also covered on Westen’s show was a five-minute analysis of Houck’s legal defense by Thomas More Society vice president and senior counsel Peter Breen. The long-time pro-life defense attorney declared Houck to be “innocent, period, end of sentence” and called the case being waged against him a “political prosecution.”

He likened the agenda of the present DOJ to that of the same department during the Obama administration where they “came after peaceful pro-life folks using the FACE Act and kept pushing.”

“They wouldn’t stop until we beat them,” Breen said.

Recalling these high-profile cases where he and other pro-life attorneys “gave the DOJ a big black eye” by defeating them in court, he said at this point “the DOJ retreated back to the hole from which it had emerged” and stopped bringing such suits against pro-lifers.

In providing Mark Houck with the strongest possible defense, Breen said their goal is to do the same in this case while making Garland accountable for bringing forth these indictments and facilitating these terrifying raids of the FBI.

FBI raids against Houck and others politically motivated; pro-abortion terror against churches and pro-life groups ignored by DOJ and FBI

Prosecutors allege Houck violated the Freedom of Access to Clinic Entrances (FACE) Act when he allegedly pushed an abortion center employee twice in one day in October 2021.

Houck’s wife Ryan-Marie told LifeSiteNews at the time that the abortion facility worker had been harassing their 12-year-old son by using vulgar language and getting into the boy’s “personal space,” and that Houck had shoved him away to protect his son.

“He didn’t have any injuries or anything, but he tried to sue Mark,” Ryan-Marie said at the time, adding that the case was thrown out of state court in the summer.

Yet somehow this dismissed local case drew the interest of Garland’s DOJ, which has executed dozens of these SWAT-type acts of terrorism against pro-life activists and other ideological adversaries, while not a single arrest has been made in connection with approximately 100 terrorist attacks against churches and pro-life centers by radical abortion activists, including “Jane’s Revenge,” since May.

And strangely, the Biden administration’s indictment against Houck contains details of his alleged offense that the pro-abortion complainant himself did not make in his original criminal complaint, in what appears to be an attempt to inflate the charges to justify making the case a federal matter.

Houck pleaded not guilty to these two counts on September 27 in a Philadelphia federal court, at which time Breen said the DOJ was “trying to send a message to pro-life and people of faith: ‘Don’t mess with us.’”

“They want to intimidate — they want to cause good people like Mark to stop praying and counseling at the abortion clinics of our country. And that’s not going to happen,” he declared.

From pro-life rescuer to Catholic bishop: The unusual story of Joseph Coffey