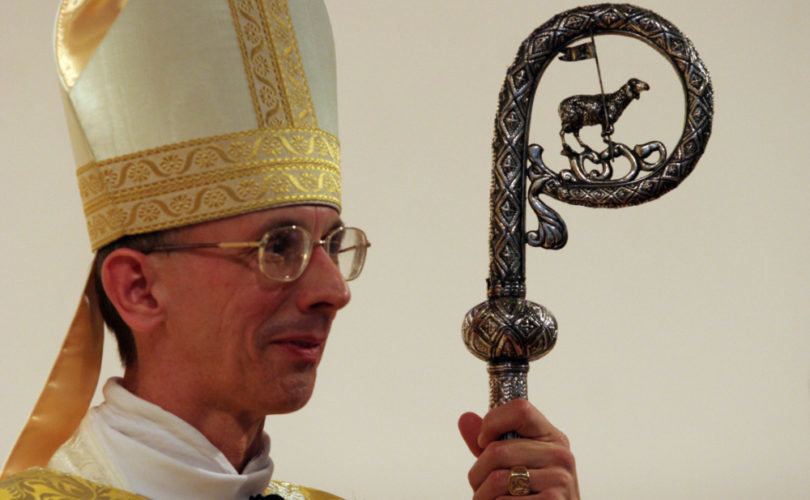 CHARLOTTE, NC, April 27, 2015 (LifeSiteNews.com) — The Catholic bishop of Charlotte, NC, stepped in and halted a parish from hosting a dissident nun censured for years by both the US Bishops’ Conference and the Vatican over her continuous public contradiction of Catholic Church teaching on homosexuality.

Homosexual activists are calling the move “out of touch” now that we are “in the era of Pope Francis.”

Bishop Peter Jugis directed Jesuit Father Pat Earl, pastor of St. Peter Church in Charlotte, to cancel a talk by Sister Jeannine Gramick at the church, according to the Catholic News Herald, once the bishop learned she was scheduled as a keynote for a May 16 LGBT-focused event there.

The talk was planned by St. Peter Church's gay and lesbian ministry and the Charlotte chapter of PFLAG (Parents, Families and Friends of Lesbians and Gays).

Sister Gramick, co-founder of the homosexual advocacy group New Ways Ministry, was going to speak on “her experience of working for greater inclusion of LGBT people and their families in the Church,” the Herald report said.

“News Ways does not speak legitimately for the teaching of the Catholic Church and therefore cannot be allowed to hold gatherings on Church property,” Diocesan Director of Communications David Hains said in a statement.

New Ways Ministry describes itself as a “gay positive ministry of advocacy and justice for lesbian and gay Catholics and reconciliation within the larger Christian and civil communities,” and it advocates for same-sex “marriage” and acceptance of the homosexual lifestyle.

PFLAG and New Ways representatives called Bishop Jugis’ action “out of touch” in a statement on the New Ways blog, and said the bishop was in conflict with Pope Francis.

“Sr. Jeannine’s message is very much in line with Pope Francis’ message of welcoming LGBT people to the Catholic Church. Her message of inclusion and acceptance has been well received by LGBT Catholics, the Catholic Church and its hierarchy for decades,” said PFLAG-Charlotte President Diane Troy, a Catholic. “It’s unfortunate that the Bishop, as our spiritual shepherd, has chosen to turn his back on so many.”

“It’s disappointing in the era of Pope Francis,” said New Ways Executive Director Francis DeBernardo, “where we see many Catholic leaders taking a more open approach to find out that Bishop Jugis has taken a more old-fashioned approach of silencing rather than [engaging in] dialogue and encounter, which are the words Pope Francis uses.”

“We are not going to have someone who opposes Catholic teaching to be teaching in a Catholic diocese,” Hains told the Charlotte Observer.

In February 2012 Sister Gramick and DeBernardo penned a Washington Post op-ed titled, “A Catholic Case for Same-Sex Marriage,” stating, “Many Catholics…understand that lesbian and gay love is as natural as heterosexual love.”

Sister Gramick founded New Ways in 1977 along with now-deceased Father Robert Nugent, and the condemnation of them and New Ways by the U.S. Conference of Catholic Bishops and the Vatican's Congregation for the Doctrine of the Faith for their advocacy against Church teaching on homosexuality goes back decades.

In 1999 the Vatican’s Congregation for the Doctrine of the Faith condemned New Ways, Sister Gramick, and Father Nugent for continually calling the Church’s central teaching on homosexuality into question since the group’s inception.

“The Congregation for the Doctrine of the Faith is obliged to declare for the good of the Catholic faithful that the positions advanced by Sister Jeannine Gramick and Father Robert Nugent regarding the intrinsic evil of homosexual acts and the objective disorder of the homosexual inclination are doctrinally unacceptable because they do not faithfully convey the clear and constant teaching of the Catholic Church in this area,” the CDF said in its statement.

“The ambiguities and errors of the approach of Father Nugent and Sister Gramick have caused confusion among the Catholic people and have harmed the community of the Church,” it continued. “For these reasons, Sister Jeannine Gramick, SSND, and Father Robert Nugent, SDS, are permanently prohibited from any pastoral work involving homosexual persons and are ineligible, for an undetermined period, for any office in their respective religious institutes.”

After the two continued to speak and write about homosexuality, they were ordered in 2000 by their religious superiors not to speak publicly or write about the subject, or about the Vatican actions, the Herald reported.

Father Nugent agreed to the discipline and stayed in parish ministry until his 2014 death.

However, Sister Gramick refused the direction of her religious order, the School Sisters of Notre Dame, and as a result of her defying the Vatican ban, she was looking at expulsion. Rather than comply, she opted to leave in 2001 to join the Sisters of Loretto, and she has persisted on the speaking circuit since.

In 2009, the late Cardinal Francis George, who was USCCB president at the time, condemned the New Ways Ministry group for alleging it was Catholic while opposing Church teaching on the objective immorality of homosexual acts.

When doing so, Cardinal George noted again the many times when New Ways founders Sister Gramick and Father Robert Nugent had been disciplined by the Church for working in defiance of the Church and its authority.

“I wish to make it clear,” he said, “that like other groups that claim to be Catholic but deny central aspects of Church teaching, New Ways Ministry has no approval or recognition from the Catholic Church and that they cannot speak on behalf of the Catholic faithful in the United States.”

That same year, while he was bishop of the Diocese of Toledo, Hartford Bishop Leonard Blair banned New Ways from a scheduled presentation at an Ohio convent on gay and lesbian ministry.

“The positions of New Ways Ministry are not at all in accord with the guidelines for pastoral care which the bishops of the United States issued in 2006 regarding ‘Ministry to Persons with a Homosexual Inclination.’ Nor does New Ways Ministry present the full, authentic teaching of the Catholic Church on homosexuality,” Bishop Blair said.

In 2011 Cardinal Donald Wuerl, archbishop of Washington and then-chair of the USCCB Committee on Doctrine, denounced New Ways’ recently published booklet titled, Marriage Equality: A Positive Catholic Approach, which had been authored by the group’s executive director, Francis DeBernardo.

“Because New Ways Ministry had been identified as a group that might cause confusion in regards to Catholic Church teaching,” diocesan spokesman Joe Kohn said at the time, “the archdiocese did clarify that a presentation by New Ways Ministry should not be hosted on church property.”

Hains noted that the Diocese of Charlotte had not received a letter of suitability from New Ways Ministry prior to Bishop Jugis’s decision to forbid the St. Peter event featuring Sister Gramick.

Typically a letter of suitability is provided by priests and members of religious orders before they speak in churches of a diocese, confirming they are in good standing in the Church, which means their message will be doctrinally sound and not contradict Church teaching. The letter should also indicate that the speaker has received sexual abuse awareness training.

Organizers of Sister Gramick’s appearance at St. Peter said they were disappointed the parish could not host the nun, and they are looking for a new venue in May.