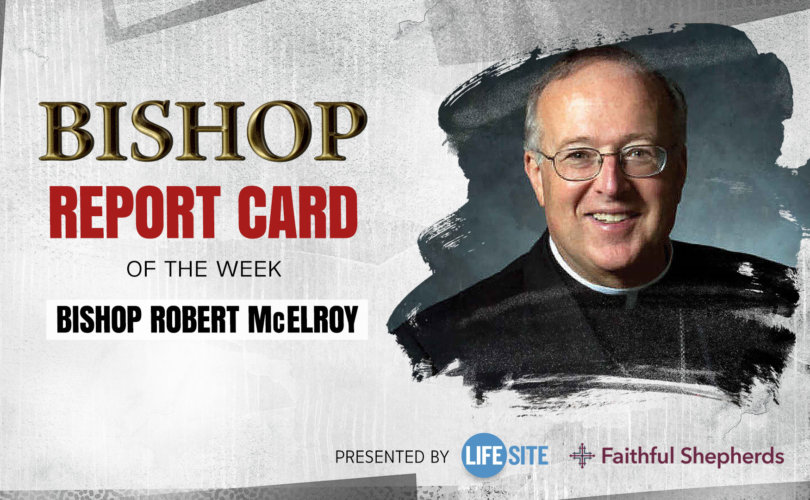 September 27, 2019 (LifeSiteNews) — Bishop Robert McElroy has been selected by Pope Francis to attend the upcoming Amazonian Synod, where it is believed that many of the long established teachings and traditions of the Church may be thrown out.

McElroy, who oversees the Diocese of San Diego, has a concerning history of straying from the Church’s perennial teachings. Throughout his time in the episcopacy as well as before his elevation to bishop, His Excellency has proven quite radical in matters ranging from abortion to homosexuality.

Faithful Shepherds, a site launched by LifeSiteNews to hold bishops accountable and encourage them to uphold the Deposit of Faith, has chosen to highlight Bishop McElroy for this week's “Bishop Report Card.”

In 2005, before being named bishop, McElroy publicly criticized the archbishop of Newark for enforcing Canon 915, which prohibits pro-abortion politicians from receiving Holy Communion. McElroy stated that the archbishop’s practice of upholding Church teaching made the Church appear too “partisan” and “coercive.”

McElroy has also been a frequent culprit of equating the tragedy of abortion with other social justice issues. For example, in a 2013 interview, he called poverty the “pre-eminent” issue that the Church should address. The bishop expressed his disappointment that the conference of bishops “labeled abortion and euthanasia as the preeminent issues in the political order.” McElroy also stated that the Church’s focus on “intrinsic evils” such as abortion has distracted Catholics from the “structural sin” of poverty.

Bishop McElroy is equally heterodox when it comes to homosexuality. In 2017, McElroy sided with San Jose bishop Patrick McGrath, who stated that he would not deny Catholic funerals to active, unrepentant homosexuals upon their deaths. McElroy said he agrees with McGrath’s “approach,” calling it the “appropriate policy” that he hopes priests will observe. He continued by stating that “our fundamental stance has to be one of inclusion in the Church.”

More recently, Bishop McElroy was a keynote speaker at the Association of U.S. Catholic Priests assembly in 2018. The Association of U.S. Catholic Priests is a dissident, pro-gay, pro-women’s ordination group comprising liberal priests from across the United States. The particular conference attended by McElroy featured pro-homosexual merchandise and buttons available for the attendees.

McElroy has also been a vocal supporter of the pro-gay priest Fr. James Martin. In a 2017 article, he endorsed Martin’s book, Building a Bridge, even though the book fails to mention the sinfulness of homosexual acts and insists that the Church change its teaching on “LGBT” issues. McElroy praised Martin for encouraging the Church to “embrace fully and immediately men and women in the L.G.B.T. community.” McElroy also stated that the opposition to Martin’s message is the result of a “cancer of vilification” entering the Church.

Bishop McElroy has clearly shown himself to be a radical prelate. In light of his contrary views, any faithful Catholic would be concerned with his recent nomination by Pope Francis to the controversial Amazon Synod. Because of McElroy’s growing importance in the Church hierarchy, it is more important now than ever to encourage him to be faithful to Christ’s timeless teachings. Please visit Faithful Shepherds to learn more about Bishop McElroy and other U.S. bishops’ views and past actions and do your part to help hold the Church hierarchy accountable.