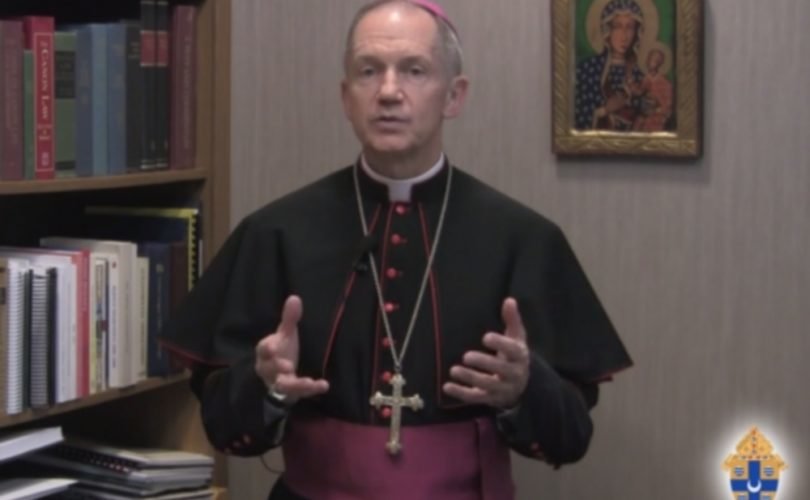 SPRINGFIELD, Illinois, February 11, 2020 (LifeSiteNews) – In a sensitively worded but thoroughly-grounded-in-truth pastoral guide regarding the handling of gender identity issues in his diocese, Bishop Thomas Paprocki declared unequivocally, “A person cannot change his or her gender,” and “should accept and seek to live in conformity with his or her sexual identity as determined at birth.”

While the diocese encourages professional counseling for those who suffer from gender dysphoria, Bishop Paprocki has made clear that certain policies regarding the Diocese of Springfield are non-negotiable:

These directives apply not only to diocesan schools, but to all Church employees and volunteers.

The clear statement of policy is timely as Catholic schools and other diocesan entities increasingly face situations that challenge previously unquestioned, widely-accepted norms.

“In an aggressively activist political climate — often fueled by social media — our pastors, principals, and administrators of parishes, schools, and affiliated groups and institutions deserve the clarity and protection of consistent diocesan policy on the matter of gender identity,” said Bishop Paprocki.

Bishop Paprocki is taking a preemptive stance to ensure that Catholic schools do not follow the path of celebrating and accepting transgenderism that public schools in his state have chosen.

Paprocki explained that the document was developed “due to the increased pressure on Catholic schools and other institutions through the courts and legislatures, requiring schools to allow boys who believe they are girls to use girls’ restroom and locker room facilities and play on girls’ sports teams, and vice versa. Many public schools have begun to implement such policies.”

While acknowledging that gender dysphoria is a real psychological condition, in which a biological male or female believes he or she is the opposite gender, Paprocki said, “It is of paramount importance to handle such situations with gentle and compassionate pastoral skill and concern.”

Gender dysphoria is a condition that affects the entire family, noted Paprocki. He continued:

In a culture that promotes a false and overly sentimentalized conception of love, many families of an adult or child with gender dysphoria will feel a sense of obligation to support their loved one in “whatever is going to make them happy.”

Family members likely wrestle with a sense of confusion, guilt, and uncertainty over how best to support their loved one; and they face pressure, either directly or indirectly, from the prevailing culture to celebrate and reinforce their loved one’s gender dysphoria and feel compelled to “solve” the problem by surgically and hormonally changing the biological sex of the affected person.

Such treatments, especially for children, are invasive and disruptive physically, chemically, psychologically, emotionally, and spiritually.

“Fueling the confusion that families face in these circumstances is not merciful,” declared Springfield’s bishop. “It is imperative to be clear on the reality of human biology as a gift from God that we cannot change.”

“The Catholic Church teaches that the removal or destruction of healthy sexual and reproductive organs is a type of mutilation and intrinsically evil,” he said. “Procedures, surgeries, and therapies designed to assist a person in ‘transitioning’ his or her gender are morally prohibited. ‘Everyone, man and woman, should acknowledge and accept his sexual identity.’”

“It must be clear that our schools and Church institutions (including sacramental records and school records) will refer to such persons with the gender pronouns, along with bathroom and locker room use and sports activities that acknowledge their God-given biology,” said Paprocki.

“Some families may not be willing to agree with this approach, and we need to respect their freedom,” he continued, “but they must likewise respect the Church’s duty to adhere to revealed truth if they are to participate actively and fully in our faith community, especially our Catholic schools.”

“A student of any Catholic school who insists, or whose parents insist, on open hostility toward, or defiance of, Church teaching, or who otherwise intentionally violate this policy, may be expelled,” he concluded.

Liberal Catholic media and pro-LGBT groups within the Church are furious with Bishop Paprocki’s guidance.

New Ways Ministry asserted that Paprocki’s policy statement is “shameful,” calling it a  “nearly unparalleled crusade against LGBTQ people” that is “in no way consistent with church teaching.”

“His dangerous wielding of authority harms many people not only in his diocese, but in the wider church,” continued the New Ways Ministry commentary. “While bishops are loathe to criticize one another publicly, for the good of the People of God, his episcopal peers must condemn Paprocki’s approach to LGBTQ people.”

DignityUSA launched a petition against Bishop Paprocki’s pastoral guidance, averring that the “onerous new policy seeks to condemn and isolate transgender and nonbinary people and their families.”

Jamie L. Manson, a columinist for the liberal National Catholic Reporter who identifies herself as the “Only out queer woman in the worldwide Catholic media,” tweeted, “Few Catholic bishops are as radically homophobic as Paprocki (remember his exorcism of same-sex marriage?). Now he has trans kids in his crosshairs.”