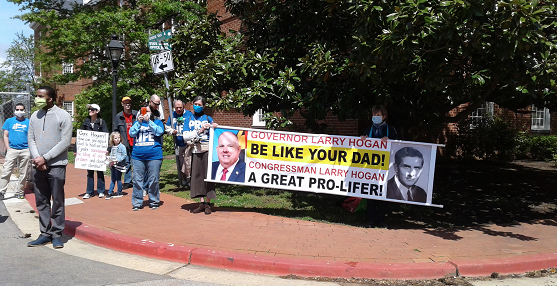 ANNAPOLIS, Maryland, April 29, 2020 (LifeSiteNews) – Standing in the shadow of both the Maryland State House and Governor’s Mansion, more than 50 pro-lifers joined by Bishop Joseph Coffey defied Gov. Larry Hogan’s stay-at-home order and called on him to shut down all of the state’s abortion centers during the COVID-19 pandemic.

While the Maryland governor has banned all so-called non-essential business, including elective surgeries and medical procedures in order to limit the spread of the coronavirus, he has permitted abortions to continue to be performed in the Old Line State.

In a statement to POLITICO, Hogan’s office confirmed that abortion providers are allowed to continue operating during the pandemic, signaling that the Republican governor views abortion as an essential procedure.

The pro-life Marylanders implored Gov. Hogan “to do the righteous, courageous thing” and “with the stroke of a pen, close the abortion mills throughout Maryland and do it today.”

After Bishop Coffey led the group in prayer, Maryland Capitol Police officers approached the group’s leader, Jack Ames, founder of Defend Life, and explained they were there to enforce Gov. Hogan’s executive order banning gatherings of more than 10 people. Despite calling attention to the unconstitutionality of the ban, the police were unmoved.

In an attempt to appease law enforcement, the group, which had already been practicing social distancing, responded by spreading themselves out even more.

As the group prayed the Stations of the Cross, another police officer used a loudspeaker to threaten the pro-lifers with arrest and a $5,000 fine. In Maryland, violators can be imprisoned for up to a year.

They hastened to complete the Stations of the Cross and then disbanded. No arrests were reported.

Earlier, after pro-lifers had discovered that Planned Parenthood and other abortion providers throughout the state were continuing to perform abortion despite the elective surgery ban – and police were attempting to prevent sidewalk counselors from speaking to pregnant mothers heading into the facilities – Laura Bogley, director of legislation for Maryland Right to Life, had notified lawmakers.

I am writing to request that you follow the models of Ohio, Texas and Louisiana and halt elective abortions during this time of worldwide pandemic. Last week, you requested that elective surgeries be restricted, a policy that Maryland hospitals seem to be embracing. However, abortion clinics are continuing business as usual here in Maryland needlessly exposing women to COVID-19 and using precious medical resources that are needed elsewhere to save Marylanders lives.

Gov. Hogan has yet to act.

In what was perhaps an attempt to prick the Catholic governor’s conscience, pro-lifers stretched out a large banner urging Hogan to “Be like your Dad! Congressman Larry Hogan, A Great Pro-Lifer!”

Congressman Larry Hogan Sr., the late father of Maryland Gov. Larry Hogan Jr., made history on Tuesday, January 23, 1973 – the day after the U.S. Supreme Court legalized abortion on demand – when he was the first on the floor of the U.S. House of Representatives to condemn Roe v. Wade.

Before leading the Annapolis group in prayer, Bishop Coffey noted that while he, like everyone, wants society to get back to normal once the pandemic subsides, “the normal that I don’t want to go back to is abortion on demand in our country.”

“I’m hoping that with this pandemic that we recommit ourselves to continue to advocate for life, and we convince the lawmakers to change the laws,” said Coffey.

“I’m a firm believer in God always bringing good from every evil,” he said.

Coffey was ordained last year as an auxiliary bishop for the military archdiocese of the United States, which counts as its members every Catholic on active duty in the Army, Navy, Air Force, and Marines.

As an early member of “Operation Rescue,” the newly-minted bishop has long been a vocal advocate for protecting the lives of the unborn, having been “arrested about a dozen times” in “rescues” conducted up and down the Atlantic seaboard.

Coffey, who turns 60 in a few days, entered the priesthood in 1996 and was quickly drawn to become a military chaplain. At one point, he spent seven months with the Marines at Camp Leatherneck in Helmand Province, Afghanistan.

At last November’s U.S. bishops meeting in Baltimore, Coffey was one of just three bishops who made their way out from the hotel to join pro-life lay Catholics praying the Rosary.

In January, as pro-lifers gathered outside Planned Parenthood’s Washington, D.C. clinic on the day before the national March for Life, Coffey was again present.

“I’ve been coming to the march since I was 14, which was 46 years ago,” he told LifeSiteNews at the time.

Bishop Coffey also serves on the board of LIFE Runners.

See more about Defend Life, the “Governor Hogan: Enforce Your No Abortions Order!” protest, and how to contact the governor at
Facebook.com/DefendLifeMarylandDCVirginia.