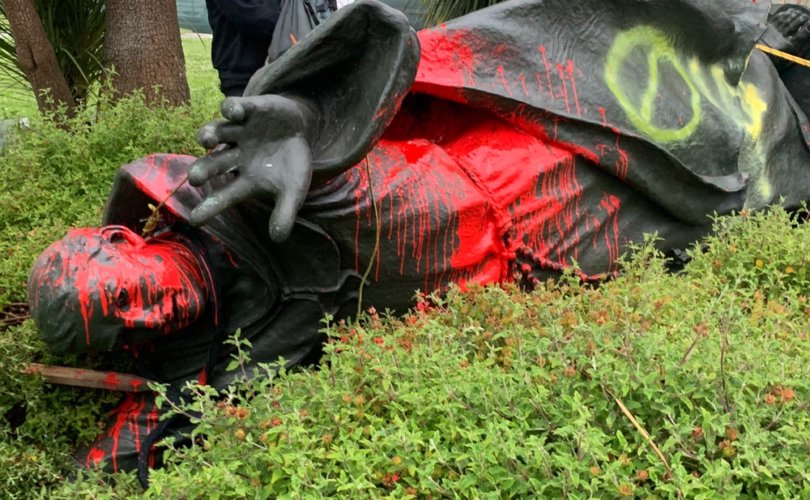 MADISON, Wisconsin, June 25, 2020 (LifeSiteNews) – Bishop Donald J. Hying of Madison, Wisconsin, said that “as a shepherd of the Church,” he “cannot remain silent” in the face of a call by a Black Lives Matter activist to destroy representations of Jesus Christ.

“I need to denounce such a call to violence and destruction,” Bishop Hying wrote in a letter dated June 23.

Shaun King, a leading voice in the Black Lives Matter movement, best known for claiming to be half-black despite both parents on his birth certificate being listed as white, had declared Monday that statues, murals, and stained-glass windows depicting Jesus as white should be taken down for being “form(s) of white supremacy,” meant to be “tools of oppression” and “racist propaganda.”

“Our statues, pictures, stained-glass windows, churches, icons, and devotions are holy to us,” Bishop Hying explained. “They are sacramentals, blessed and sacred, visible expressions of the love of God, poured out in the life, death, and resurrection of Jesus and made manifest in the saints. They remind us of God, His love for us in Christ, and the nearness of the divine.”

The bishop of Madison condemned the “secular iconoclasm of the current moment,” as it “will not bring reconciliation, peace, and healing. Such violence will only perpetuate the prejudice and hatred it ostensibly seeks to end.”

He praised religious freedom as a God-given right guaranteed by the Constitution. “We must not surrender our religious liberty to the voices that seek the destruction of our public presence, the diminishing of our sacramental worship, and the denial of our belief in Jesus Christ as the savior of the world,” he added. “Only the love of Christ can heal a wounded heart, not a vandalized piece of metal.”

Hying admitted he is aware of “some of the torturous narrative of violence and oppression against both the Native peoples of this land and the African peoples brought here as slaves.”

“In my opinion,” he argued, “the injustices suffered by these peoples over the course of centuries are two of the greatest moral failures of our country, with deep repercussions in our culture. We must study and know this history in order to transcend it, to learn from it and to commit ourselves to justice, equality, and solidarity because of it.”

However, “even the worst aspects of history should be remembered and kept before our eyes. Auschwitz remains open as both a memorial and a museum, so that humanity never forgets the horror of the Holocaust.”

He suggested, instead of having rioters tear down and destroy statues, to have “respectful discussion about the proper way to commemorate people and events, such as Christopher Columbus, the European colonization of the Americas, the tragic suffering of slavery, the Civil War, Confederate leaders, the Founding Fathers, and the evangelization of our continent.”

Then, “measured decisions about statues, buildings, and memorials” could be made in a civilized manner.

The bishop asked a number of rhetorical questions:

If we allow the commemorative and visual history of our nation to be destroyed by random groups in the current moment of anger, how will we ever learn from that history?  Does toppling and vandalizing a statue of George Washington because he owned slaves, really serve our country and our collective memory?  Would it not be better to let the whole history of our country be on full display in all of its complexity, so that we can value the patrimony of our heritage and simultaneously critique the injustices and sins of the past? … Should certain statues be placed in museums or storage? Perhaps. Should we let a group of vandals make those decisions for us? No.

In response to Shaun King’s claim of a white representation of Jesus Christ indicating “white supremacy,” Bishop Hying pointed out that among Catholics, “every culture, country, ethnicity, and race has claimed Jesus and the Blessed Virgin Mary as their own. Our Lady of Guadalupe appeared to St. Juan Diego as a mestiza, African art depicts Jesus as Black, Asian depictions of the Blessed Mother, too, take on similarities of both bodily appearance and, often, cultural garb.”

He asked, “In this context, are white representations of Christ and His Mother inherently signs of white supremacy? I think not. Because the Son of God became incarnate in our human flesh, does not all of humanity – every race, tribe, and tongue – have the spiritual ability to depict Him through the particular lens of their own culture?”

Bishop Hying’s letter comes on the heels of a statement by San Francisco Archbishop Salvatore Cordileone on June 20.

Cordileone asked, “What is happening to our society?”

“A renewed national movement to heal memories and correct the injustices of racism and police brutality in our country has been hijacked by some into a movement of violence, looting and vandalism,” he continued, spelling out what happened during many of the protests.

Tearing down the statue of St. Junipero Serra, who was canonized by Pope Francis in 2015, “was mob rule,” the archbishop said, “a troubling phenomenon that seems to be repeating itself throughout the country.”

“Our dear city bears the name of one of history’s most iconic figures of peace and goodwill: St. Francis of Assisi,” Cordileone explained. “For the past 800 years, the various Franciscan orders of brothers, sisters and priests that trace their inspiration back to him have been exemplary of not only serving, but identifying with, the poor and downtrodden and giving them their rightful dignity as children of God. St. Junipero Serra is no exception.”

The archbishop of San Francisco went on to briefly recount the saint’s achievement in his life.

“St. Serra made heroic sacrifices to protect the indigenous people of California from their Spanish conquerors, especially the soldiers,” Cordileone wrote. “Even with his infirmed leg which caused him such pain, he walked all the way to Mexico City to obtain special faculties of governance from the Viceroy of Spain in order to discipline the military who were abusing the Indians. And then he walked back to California.”

“And lest there be any doubt, we have a physical reminder to this day: everywhere there is a presidio (soldiers’ barracks) associated with a mission in the chain of 21 missions that he founded, the presidio is miles away from the mission itself and the school,” he pointed out.

“St. Junipero Serra also offered them the best thing he had: the knowledge and love of Jesus Christ, which he and his fellow Franciscan friars did through education, health care, and training in the agrarian arts.”

The bishops of California, in a separate statement, failed to forcefully condemn the tearing down of statues of St. Junipero Serra. They only asked that for this process of tearing down statues “to be truly effective as a remedy for racism, it must discern carefully the entire contribution that the historical figure in question made to American life, especially in advancing the rights of marginalized peoples.”

In other words, as long as this criterion is met, tearing down a statue, and thus destroying public or private property, could be justified, according to the bishops of California, which includes the current president of the United States Conference of Catholic Bishops, Archbishop José H. Gomez of Los Angeles.

The bishops did not distinguish between the mob destruction of a statue and its removal after a political debate, where both sides make their case, and elected officials then make a decision.