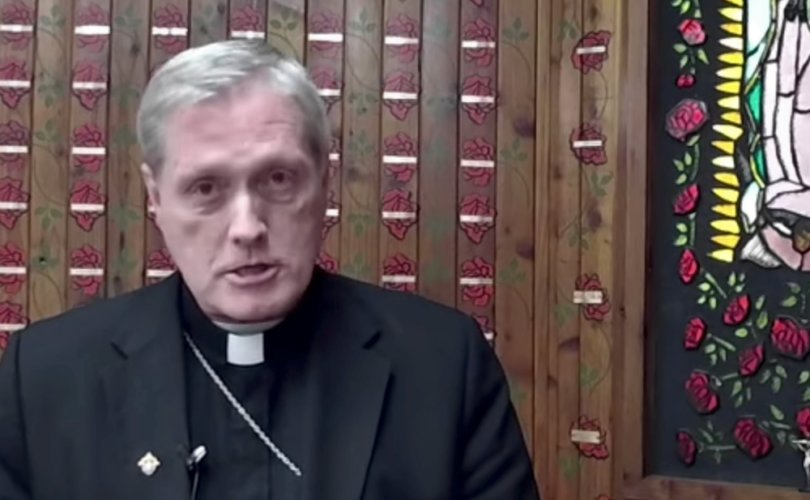 “No priests are to make themselves available to hear Confessions,” Bishop Robert M. Coerver of Lubbock, Texas, had originally ordered priests within his diocese in response to the coronavirus outbreak.

Coerver noted in an April 2 statement that Governor Greg Abbott issued an executive order Tuesday “with which we are to comply in carrying out what he defined as our ‘essential services’ as Church.”

In his executive order, Abbot encouraged essential services be provided “through remote telework,” but said that if religious services “cannot be conducted from home or through remote services,” they should be conducted consistent with the guidelines from the president and the CDC by “practicing good hygiene, environmental cleanliness, and sanitation, and by implementing social distancing to prevent the spread of COVID-19.”

The order mentioned not only the “providing” of essential services, for instance a priest saying Mass, but also the “obtaining.” Accordingly, Catholics are now in a position to go to church and receive the sacraments, as long as due precautions are taken.

The governor offered as an example a “drive-up service” where people remain in their cars, according to Texas news outlet KBTX.TV.

“That seems like it would satisfy the criteria that we're talking about,” he said.

Abbott also prohibited local authorities from going beyond what he had deemed permissible restrictions, citing religious services as an example, KBTX.TV reported.

“So to the extent, for example, that religious services are permitted as specified in this executive order, they cannot be denied by a local ordinance under this order,” said Abbott.

Coerver said he and “most of the Bishops of Texas” took part in a conference call Wednesday, and decided to keep Masses private. (There are 15 dioceses in Texas and about 17 active bishops and auxiliary bishops, as well as a number of retired bishops.)

While Abbott designated churches as essential services, “we are still under orders to carry out such services in keeping with the national guidelines set forth by the federal government,” Coerver said.

That includes gatherings of no more than ten people who must keep the “social distance” between them of least six feet.

“In keeping with those guidelines, there is a consensus among the Bishops of Texas that the practice of only private Masses be continued, hopefully live-streamed, with only needed liturgical ministers and video technicians present, never to exceed a total of 10 persons (counting the priest),” Coerver stated.

The bishops also discussed “the sensitive issue of the Sacrament of Penance and Reconciliation,” he said.

While about 30 dioceses across the country have suspended confession, Coerver’s March 29 directive, which he issued in response to a stay-in-place order by Lubbock’s mayor, was notable in that he made no exception for Catholics in danger of imminent death.

In his April 2 statement, Coerver said he has now decided to implement the “best practice” for confession which the bishops discussed on the conference call.

“Given the situation of pervasive fear and serious illness, any member of the Faithful in serious need of making a Confession can contact a priest to make an appointment to have their Confession heard,” he said.

“The Sacrament must be celebrated either outside or in a large well-ventilated space, with ‘social distancing’ scrupulously observed.was not the first bishop to suspend confession because of the pandemic,” Coerver noted.

“I am asking our good priests, who have made so many concessions and adaptations on behalf of our Faithful, to now make themselves available in this manner to penitents who are experiencing grave necessity for Confession.”

Coerver added that regularly scheduled confessions were not possible “because that would equate to gathering a group that would violate ‘Stay at Home’ and ‘Shelter in Place’ orders.”

According to an April 1 tweet by Eric Sammons, 30 American dioceses so far have banned confession except in the danger of death.

The latest map showing which dioceses have stopped confessions (except in danger of death).

The good news: I made two mistakes on my last map—Kansas City and Little Rock *do* allow for confession.

The bad news: 30 dioceses have banned confessions, except in danger of death. pic.twitter.com/3MpXFRC6ge

Meanwhile, a number of prominent and well-respected Catholics have urged the bishops “to do everything you can to make the sacraments more available to us” during the COVID-19 pandemic in an April 1 open letter, titled “We Are An Easter People.”

LifeSiteNews is collaborating with the initiative as well, launching an “urgent appeal to bishops” on the LifePetitions platform.

“Something is terribly wrong with a culture that allows abortion clinics and liquor stores to remain open but shuts down places of worship,” the open letter pointed out.

“While safety and cooperation with civil authorities is necessary, we must do everything we can to have access to what is essential for our spiritual lives. We should certainly not voluntarily deprive ourselves of the sacraments.”