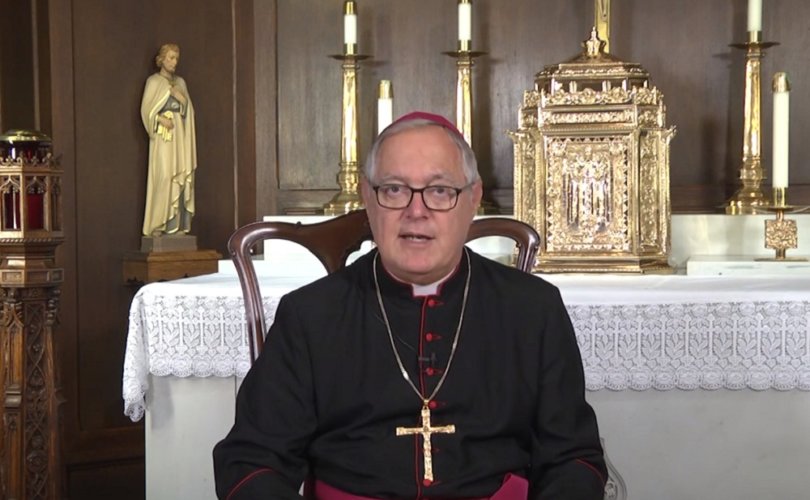 PROVIDENCE, Rhode Island, August 21, 2020 (LifeSiteNews) — Bishop Thomas Tobin is urging people to return to God “just in case” the natural disasters, political upheaval, and global pandemic are signs that the “end times” could be near.

I don't subscribe to dire forecasts of the end times, but with horrible wildfires out West, tropical storms in the ocean, widespread drought, a global pandemic, political division, and anger in the streets, one has to wonder. We'd better return to God. Now. Just in case.

Tobin, 72, unlike his confrere who bears the same surname, Cardinal Joseph Tobin of Newark, New Jersey, is known for for his conservative and pro-life views, and for his seemingly controversial tweets.

Tobin was hit with a global backlash in June 2019 when he tweeted a simple warning to his diocese to not take part in pro-homosexual LGBT “Pride” events during so-called “Pride Month,” pointing out that these events “promote a culture and encourage activities that are contrary to Catholic faith and morals. They are especially harmful for children.”

More recently, he was rebuked by many for sarcastically implying that pro-abortion, pro-LGBT Democratic presidential nominee Joe Biden is not a Catholic, tweeting: “Biden-Harris. First time in awhile that the Democratic ticket hasn’t had a Catholic on it. Sad.”

Tobin’s August 20 message received mixed reviews. While there was agreement that, in the words of Psalty Catholic, “it’s beginning to look a bit apocalyptic,” others found fault with the bishop’s wording:

Just in case??? So, a bishop of the Catholic Church is saying God is a last resort??

A couple of people added to Tobin’s list of omens the thunderstorm complex, or derecho, or land hurricane that devastated Iowa August 10, reportedly killing three people and leaving thousands in the state without power for at least a week:

Don’t forge the Iowa derecho, Your Excellency. I didn’t even know what a derecho was until a week ago.

“Wildfires, storms, droughts, polit divisions, & public unrest have happened LOTS of times in history. As for pandemics, this one is actually pretty mild by historical comparison.BUT, regardless, yes … we do need to turn/return to God. All the time!” tweeted Prodigal Son.

“Well wildfires unfortunately happen every year in the West. And nothing is given to help these states better prepare,” noted OneLove.

One participant identified as Debbie sounded exasperated at the reception Tobin’s message to turn to God received.

“Goodness, can’t he just say something and not have it picked apart? I understood him. Pray to get patience,” she tweeted.

“And you will hear of wars and rumors of wars. See that you are not alarmed, for this must take place, but the end is not yet.  For nation will rise against nation, and kingdom against kingdom, and there will be famines and earthquakes in various places. All these are but the beginning of the birth pains,” Our Lord says in Matthew 24:3-7.

“And there will be signs in sun and moon and stars, and on the earth distress of nations in perplexity because of the roaring of the sea and the waves, people fainting with fear and with foreboding of what is coming on the world. For the powers of the heavens will be shaken. And then they will see the Son of Man coming in a cloud with power and great glory. Now when these things begin to take place, straighten up and raise your heads, because your redemption is drawing near,” he says in Luke 21:25-28.

The Apostle Peter foretold of “scoffers” in the last days and reminded his readers that God desires repentance:

Knowing this first, that in the last days there shall come deceitful scoffers, walking after their own lusts, saying: Where is his promise or his coming? for since the time that the fathers slept, all things continue as they were from the beginning of the creation. For this they are wilfully ignorant of, that the heavens were before, and the earth out of water, and through water, consisting by the word of God. Whereby the world that then was, being overflowed with water, perished. But the heavens and the earth which are now, by the same word are kept in store, reserved unto fire against the day of judgment and perdition of the ungodly men.

But of this one thing be not ignorant, my beloved, that one day with the Lord is as a thousand years, and a thousand years as one day. The Lord delayeth not his promise, as some imagine, but dealeth patiently for your sake, not willing that any should perish, but that all should return to penance. (2 Peter 3:3-9.)