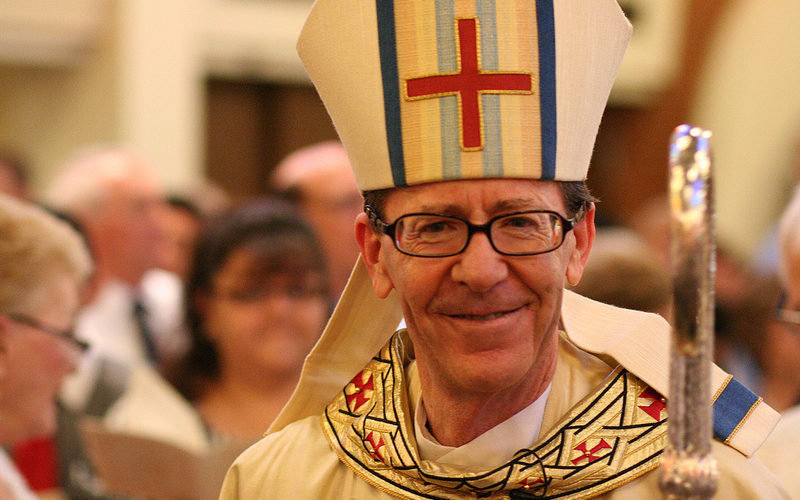 PHOENIX, Arizona, September 30, 2015 (LifeSiteNews) — The Catholic bishop of Phoenix is specifically summoning men in his diocese to fight the spiritual attack currently underway against marriage and the family, terming it “a call to battle.”

The bishop also uses his letter to the men of his diocese as a call to stand for life in the wake of the Planned Parenthood human remain trafficking scandal.

Bishop Olmsted issued “Into the Breach” yesterday, an Apostolic Exhortation in which he condemns gender ideology and the Sexual Revolution, saying it is a very real spiritual battle that is, “killing the remaining Christian ethos in our society and culture, and even in our own homes.”

“The world is under attack by Satan,” the Arizona bishop states, “as our Lord said it would be (1 Peter 5:8-14). This battle is occurring in the Church herself, and the devastation is all too evident.”

Bishop Olmsted has been a vocal defender of life and Church teaching on sexuality.

“How did it come about that a culture so steadfast in supporting marriage and spousal commitment two generations ago became a culture that has reduced sexuality to mere pleasure and self-serving ends?” he asks, answering that it is the Sexual Revolution, which has “ushered in the scourge of abortion, pornography, and sexual abuse so rampant in recent decades.”

The Sexual Revolution has given fake freedom, he says, and undermined the family.

“Instead of real and authentic love, this false ‘liberty’ offers cheap pleasures that mask a deeper loneliness and pain,” states Bishop Olmsted. “Instead of the security of traditional family bonds, it leaves children longing for the stability of a mother’s and a father’s love.”

The Revolution also violates Natural Law, according to the bishop, and has failed in its purpose.

“In its wake is wreckage, countless broken hearts bound by fear of more pain, broken lives, broken homes, broken dreams and broken belief that love is even possible,” the bishop says. “This is the rotten fruit of the Sexual Revolution.”

The apostolic exhortation, a letter written to encourage the faithful to live in a certain way or to do something, is accompanied by its own website and a video trailer.

Bishop Olmsted cites disturbing statistics demonstrating a decline in practice of the Catholic faith, and goes on to tell men how they must defend God’s plan for marriage and family.

“This is a serious breach, a gaping hole in Christ’s battle lines,” he states. “One of the key reasons that the Church is faltering under the attacks of Satan is that many Catholic men have not been willing to ‘step into the breach’ – to fill this gap that lies open and vulnerable to further attack.”

He poses three questions for men of all ages and walks of life in the Phoenix diocese, clergy and laity alike:

What does it mean to be a Catholic man?
How does a Catholic man love?
Why is fatherhood, fully understood, so crucial for every man?

These questions are then explored in the context of three concepts; the New Evangelization, the Catholic Church as a Field Hospital and Battle College, and the idea that Man and Woman are Complementary, not Competitors.

“This is a serious breach, a gaping hole in Christ’s battle lines. One of the key reasons that the Church is faltering under the attacks of Satan is that many Catholic men have not been willing to ‘step into the breach’ – to fill this gap that lies open and vulnerable to further attack.”

The difference between man and woman can be a challenge, Bishop Olmsted says, “since misunderstanding can creep in and sin can cause us to lose respect for one another, robbing us of our hope for peaceful and fruitful collaboration between men and women. But this struggle between the sexes is not the fault of God’s creation; it is the result of sin.”

He cites the Holy Father stating, “The difference between man and woman is not for opposition, or for subordination, but for communion and procreation, always in the image and likeness of God,” and explains how the rapid advance of gender ideology is infecting societies across the world.

“This ideology is destructive for individuals and society, and it is a lie,” Bishop Olmsted states. “It is harmful to the human person, and therefore, a false concept that we must oppose as Christians.”

“As Pope Francis reminds us all to ‘love one another more,’” the bishop tells men, “I exhort you, my sons and brothers in Jesus Christ, to embrace more deeply the beauty and richness of the sexual difference and to defend it against false ideologies.”

The bishop offers men role models from the saints for authentic masculinity and lays out the regular practices of a Catholic man in following Christ, as well as helps to define the various roles of manhood.

Bishop Olmsted concludes his letter with the call for men of his diocese to stand for life.

“As I write this exhortation, videos are being released documenting the barbaric practice of selling baby body parts by Planned Parenthood,” he says. “Since this infamous agency receives around half a billion dollars each year from the U.S. Government, funds to carry on their slaughter of innocents, no American citizen, and certainly no man, can remain silent about this travesty of our times. We need to get off the sidelines and stand up for life on the front lines.”