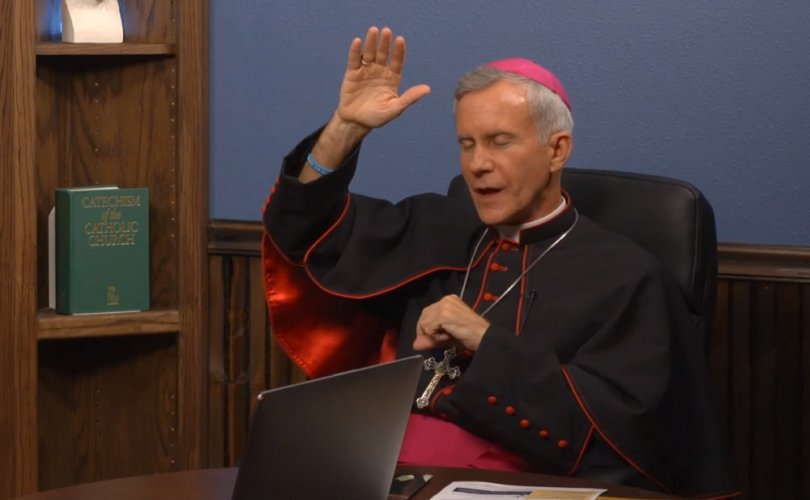 TYLER, Texas, July 17, 2020 (LifeSiteNews) — Bishop Joseph Strickland was so overcome by emotion while offering his first traditional Latin Mass on the feast of Corpus Christi that he could scarcely speak.

“There’s nothing but awe. Just the beauty of the corporal and how the Host and the chalice are treated — and I have to say [long pause] I could hardly say the words of consecration because I became so filled with emotion, so deeply struck by those words,” the bishop of Tyler, Texas, told the Catholic Register’s Bree Dail in a lengthy interview.

“Thank God we only must whisper them in this rite, because I am not sure I would have been able to speak above that whisper, so struck I was at the profundity,” he added.

“It was the first time in my life that I had ever said those words in Latin, and I could hardly get them out. It’s indescribable, really.”

Known for his candor, orthodoxy, and pro-life witness, Bishop Strickland had previously attended only one traditional Latin Mass in his 35 years as a priest, and when he entered the seminary in 1977 at age 18, “the Latin Mass had been all but relegated to history. The rite was not spoken of, not alluded to, not studied — just gone.”

In its stead was the Ordinary Form, or Novus Ord0 Mass, promulgated in 1969 by Pope Paul VI.

Strickland told Dail that he “only really began to understand the desire” for the traditional Latin Mass when Pope Benedict XVI released the motu proprio Summorum Pontificum on July 7, 2007, which insisted that Catholics are entitled to access to the traditional Latin, or Extraordinary Form of, the Mass.

Tyler’s bishop at the time brought the Priestly Fraternity of St. Peter to the diocese “to establish a little community here,” Strickland recalled.

The Fraternity later founded a parish in the diocese, and “one of the very first things I did as bishop was to celebrate confirmation for them in Latin,” which takes place outside the Mass in the traditional rite, he said. “They joked my Latin had a Spanish accent!”

Strickland, 61, described how his desire for the traditional Latin Mass grew out of his practice of twice-daily Adoration of Jesus in the Blessed Sacrament, which, since he was consecrated bishop seven and a half years ago, “has become the center of my life.”

His devotion to the Blessed Sacrament inspired Strickland to declare 2020 a “Year of the Eucharist” in his diocese, with one of the encouraged activities being Eucharistic processions on Corpus Christi, which honors the Most Holy Body of Christ.

He was also inspired to learn the traditional Latin Mass.

“Praying before Christ in the Blessed Sacrament drew me to this rite,” he said.

“So, all through Advent, I was praying, and this desire kept growing. I wanted to do something to honor Jesus Christ. I kept thinking about trying to learn the traditional Latin Mass for the traditional feast of Corpus Christi,”  he told Dail.

“It’s so clear that this liturgy is not about us — it’s fully about Him. I want to honor Him.”

That became more apparent to Strickland as he began to study the rite.

“Understand that, before January of this year, I hadn’t even read the prayers of the extraordinary form. I was literally starting from scratch,” he said.

He was tutored by a young priest familiar with the Latin Mass, watched YouTube videos, and read Fr. John Zuhlsdorf’s blog, Strickland said, adding that priests and bishops who are considering learning the form must be prepared for homework.

“It takes concentration and effort at first, but you will find there is so much grace involved. It’s so worth learning,” he said.

His “sense of wonder and awe” continued to grow “throughout the entire process,” he told Dail.

“I had, of course, heard many of the terms in Latin before, but I really didn’t know how they fit as deeply as they do in the extraordinary form. It’s almost like there were a few pieces in a puzzle that were missing, and I only realized they were when I finally said the Mass,” said Strickland.

“The realization you get as a priest, of the deep meaning of these prayers, these words, I can understand now in a profound way.”

Strickland was clear that there is “no reason that the ordinary form can’t be reverent — it’s Him!” and he used a music analogy to compare the two.

“The way that I describe it is that the ordinary form is like the ‘basic melody’ of a symphony. It is recognizable. The extraordinary form is the same melody accompanied by the full orchestra,” he said.

The bishop appealed to Catholics who attend the traditional Latin Mass to avoid a “reactionary response” to any lack of reverence they may witness in Novus Ordo Masses, or to any persecution for their reverence they may experience.

“I think this is where the devil seeps in, distracting this community from the focus on Jesus to a focus on the ritual, on legalism and even elitism. It’s a subtle deception,“ Strickland said.

“I encourage those in the traditional congregations to remember why they love the liturgy, why and how the reverence points to Him,” he said. “There is such a great opportunity for setting an example of simple, joyful reverence in the extraordinary form.”

He also urged Catholics to attend the traditional Latin Mass.

“After what I have experienced, as bishop, I cannot help but encourage everyone towards meeting Jesus in wonder, within the beauty of the extraordinary form of the Mass,” Strickland said.

The full interview is available here.