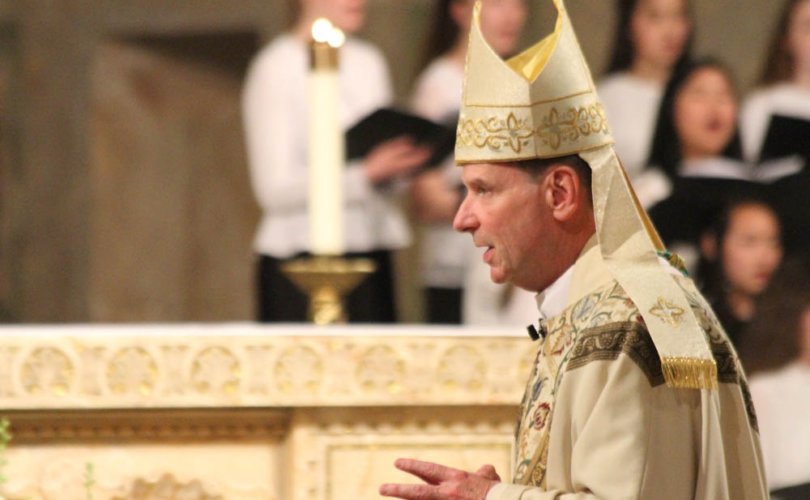 Bishop Michael Burbidge today called Northam's comments a “staggering admission” that reveals just “how far abortion advocates are willing to go in taking the life of a precious child.”

Northam caused a national uproar Wednesday when he told a radio station that if a woman seeking an abortion goes into labor and the baby is delivered, the baby would be kept comfortable, resuscitated “if that’s what the mother and family desire,” and then a discussion between the mother and physician would ensue.

The comments, made in response to a question about a Virginia abortion bill that has since failed, elicited strong reactions across the country, especially from Republicans and conservatives.

In a statement released today, Bishop Burbidge said Northam’s comments betray “a new level of deep-rooted animus against the inherent goodness of every child.” He also noted how not just in Virginia but also in New York “extreme abortion legislation” has been introduced recently. “This is a critical moment in the life of our Church and our society,” Burbidge’s statement read.

Northam, however, doubled down on his remarks despite near-universal outrage. In a tweet, Northam, a former pediatric neurologist, said it is “shameful and disgusting” to say he hasn’t “devoted” his “life to caring for children.”

Northam made his original infanticide comments while being interviewed about fellow Virginia Delegate Kathy Tran’s proposed abortion bill, which Tran admitted would allow abortions at 40 weeks of pregnancy and even as a mother is going into labor.

Burbidge said in his statement, “This bill rightfully failed — but I am, along with so many people of good will, distraught that this bill was introduced in the first place. It could have paved the way for babies to suffer a violent and gruesome death moments before birth and could have been harmful to women.”

“My hope is that this bill failed because the elected officials of the state legislature recognized that it was an evil and impermissible offense to human life and our collective decency. Abortion of a baby in the final stage of pregnancy borders on infanticide. Our governor, however, may be willing to cross that border and go even farther.”

President Trump weighed in on the controversy as well. In an interview with The Daily Caller, the president said Tran’s defense of her bill was “terrible.”

“Do you remember when I said Hillary Clinton was willing to rip the baby out of the womb? That’s what it is, that’s what they’re doing, it’s terrible,” he said. Speaking about Northam, Trump said “I’m surprised that he did that, I’ve met him a number of times.”

Trump predicted the controversy “is going to lift up the whole pro-life movement like maybe it’s never been lifted up before. The pro-life movement is very much a 50-50, it’s a very 50-50 issue, actually it’s gained a point or two over the years.”

Extreme abortion legislation has been taken up by the Democrat Party at an alarming rate in recent weeks. Aside from New York, Virginia, and Vermont, Rhode Island is currently considering a bill that would allow abortion until birth. During her State of the State address, Catholic Rhode Island Governor Gina Raimondo (D) promised she would sign the legislation. Congressional Democrats also took up a bill that would have given $37.5 million to the pro-abortion United Nations Population Fund, a move the Trump administration promptly rejected. President Trump promised pro-lifers at this year’s March for Life that he would veto any legislation that comes to his desk that weakens protections for the unborn.

One of the likely reasons Democratic lawmakers are seeking to expand abortion at the state level is because they fear Roe v. Wade will soon be overturned. Such fears are compounded by rumors that Supreme Court Justice Ruth Bader Ginsburg's health is deteriorating and her days as a judge are numbered. Ginsburg, perhaps the court’s most liberal member, is a staunch supporter of abortion. Should she resign or die, President Trump would likely nominate a pro-life judge like Amy Coney Barrett. Such a decision could result in the overturning of Roe v. Wade. A pro-life justice would increase the conservative majority of the court from 5-4 to 6-3.