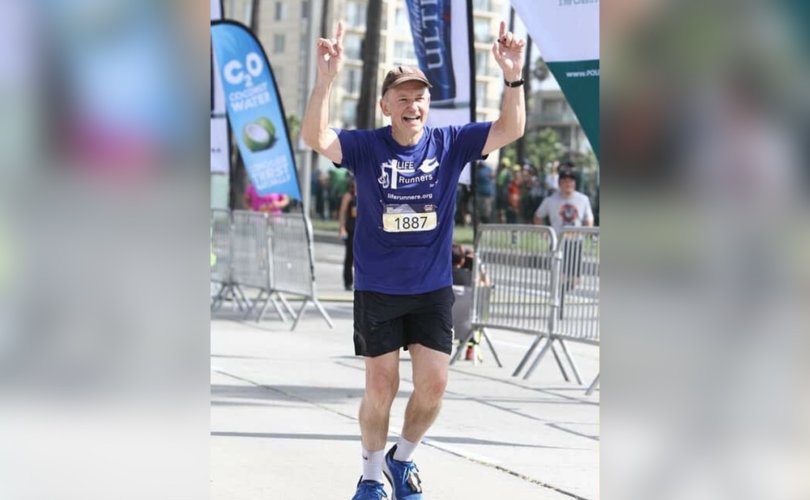 SPRINGFIELD, Illinois, October 26, 2018 (LifeSiteNews) – There is pain associated with both training for and running a marathon, and for Springfield Bishop Thomas Paprocki, running the recent Long Beach Marathon with LIFE Runners was another opportunity for him to raise awareness and witness to the sanctity of human life, while also uniting with Christ’s suffering.

Bishop Paprocki told people he would offer up the pain he experienced in reparation and for atonement for sins of clergy, himself included.

Prayer is the perfect way for Paprocki to tie running with defending life.

“It’s a great opportunity to pray,” he said.

The bishop uses a finger rosary while running, and he prays continually through races and training, for life, for people who are ill and ask for prayer and for various other intentions.

Paprocki told LifeSiteNews that as he held the crucifix at the end of the small round metal rosary during a training session for the 26.2-mile race, he felt the Lord saying to him, “Hold fast to the cross and embrace the pain.”

“I think that’s very much what we are asked to do by our Lord,” he said, and doing so is essential, so that we are eventually with Him in His heavenly kingdom.

It became his mantra for training and running at Long Beach.

The Long Beach race was the 66-year-old bishop's 24th marathon, and his experience there with LIFE Runners was also another chance to perfect the practice of brandishing the rosary as a weapon in the fight for life.

Paprocki typically finishes a full 26-mile marathon in just under five hours, doing so as well at Long Beach, and he estimates he prayed around 200 Hail Mary’s while running the Marathon.

He told LifeSiteNews, “In five hours you can say a lot of Hail Mary’s.”

The bishop, known to voice his defense of life and for other Church principles, was raised in a devout Catholic family with nine children. His father practiced his pharmacy work in line with his Catholic faith, he recalled, and through his upbringing his pro-life morals were there from the beginning.

But even given his pro-life rearing, Paprocki holds a certain belief in the sanctity of human life and a readiness to defend it.

“It’s another matter of God has touched me to have this conviction for life,” he told LifeSiteNews.

And so when he now makes statements in support of life, to which people respond that he is showing courage as a bishop, it actually feels funny to him.

It’s simply a matter of believing and upholding the Church’s teaching, he said.

“This is what we believe, this is what our faith teaches,” said Paprocki.

The fact his voicing support for life seems extraordinary shows how we have counter what’s in the culture, he said.

One way he does so is by running with and serving as chaplain for LIFE Runners.

The group has the mission of crossing the finish line that ends abortion through prayer and witness. The latter is achieved with a national race each fall, and a relay across the U.S. each summer. Team members don their “REMEMBER The Unborn – Jer 1:5” jerseys as they run and at other times to spread the pro-life message.

LIFE Runners was recognized as a race charity for the first time at the Long Beach weekend. In addition to witnessing by wearing pro-life jerseys when they ran, the charity designation enabled the group to perform outreach to thousands with a booth at the race expo.

“A lot of people came by the booth and were very interested and very supportive,” Bishop Paprocki said.

The bishop celebrated Mass with team members at their host parish the night before the marathon. He blessed the runners before they ran, and joined LIFE Runners team members to pray at Planned Parenthood and visit a local crisis pregnancy center.

“A lot of good things,” happened during the race weekend, he said.

The bishop has run a marathon with LIFE Runners most of the years since joining the group in 2011.

Since the first of his 24 marathons in Chicago in 1995, Bishop Paprocki estimates he has raised roughly a half-million dollars for charitable causes in those races.

His beneficiary this year was Divine Mercy Senior Living Community in his diocese.

“This is protecting life at the other end of life,” Paprocki said.

Some of the other charities he has raised funds for include the Chicago Legal Clinic for the poor, which he helped to found, Mercy Home for Boys and Girls, vocations in the Diocese of Springfield, other various pro-life causes and March for Life scholarships.

For the bishop, having physical fitness as a priority is another way of respecting life. An additional conviction he holds is the maxim sound mind-sound body.

“It’s about being stewards of God’s creation,” Bishop Paprocki said. “God gave us our bodies, we should take care of them.”

In terms of tying running and marathons to defending life, there are also the ideas of endurance and perseverance, he notes.

“I think that really relates to the pro-life movement,” said Paprocki.

Ending the scourge of abortion isn’t going to happen overnight, he said,

“It’s going to take perseverance if we’re going to reach the finish line,” he added.