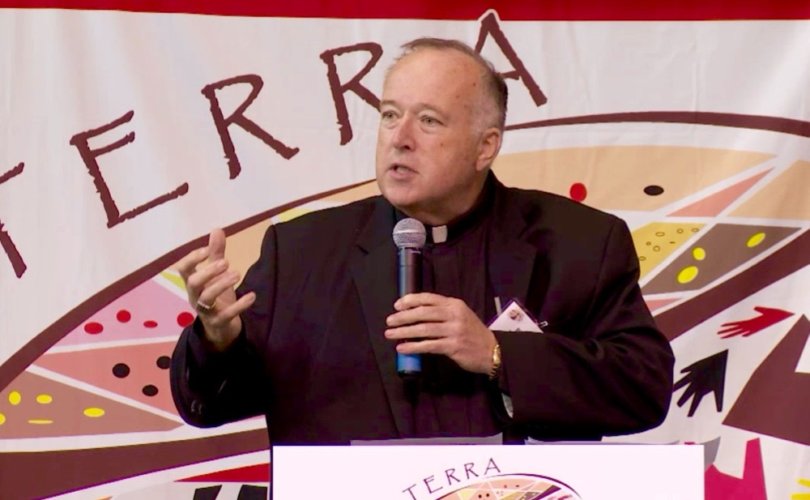 SAN DIEGO, California, February 7, 2020 (LifeSiteNews) – The Bishop of San Diego has made the case that “climate change” could be considered “uniquely preeminent in Catholic social teaching” since the potential death toll due to man-made temperature rise is “larger” than abortion and “threatens the very future of humanity.”

In a speech titled “Conscience, Candidates and Discipleship in Voting,” which Bishop Robert J. McElroy delivered at the University of San Diego yesterday, the bishop said that Catholic voters need to discern where their priorities lie in the upcoming 2020 election.

“Frequently in discussions of the application of Catholic social teaching to voting, the question is raised whether one issue has a unique priority among all of the other issues in its claim upon believers in the current election cycle. Some have categorized abortion in that way. Others, climate change. This question deserves deeper scrutiny,” he said.

The bishop went on to list four points that he said should be considered when setting priorities.

Against the backdrop of these two monumental threats to human life, how can one evaluate the competing claims that either abortion or climate change should be uniquely preeminent in Catholic social teaching regarding the formation of Americans as citizens and believers? Four points should be considered.

It is unclear if any deaths in the U.S. have resulted from “climate change.” Abortion, however, has taken the lives of over 60 million in the U.S. alone since 1973. In the last 100 years, there have been over one billion abortions worldwide.

Previous popes have made it clear that abortion is the crucial moral issue of the day. They’ve made the case that without protecting the lives of the innocent, youngest and most vulnerable members of humanity, society cannot protect its citizens in other ways.

In his 1988 exhortation Christifideles Laici, St. John Paul II said that the “right to life” must be defended with “maximum determination.”

In Donum Vitae, then-Prefect of the Congregation for the Doctrine of the Faith Cardinal Joseph Ratzinger – later Pope Benedict XVI – wrote that the “inviolable right to life of every innocent human individual” must be defended since it is the “constitutive element” of “civil society and its order.”

Bishop McElroy painted a picture of the doom he believes “climate change” will cause.

Existing trajectories of pollutants being placed in the atmosphere by human activity, if unchecked, will raise the temperature of the earth in the coming decades, generating catastrophic rises in human exposure to deadly heat, devastating rises in water levels and massive exposure to a series of perilous viruses. In addition, there will be severe widespread famines, draughts and massive dislocations of peoples that will cause untold deaths, human suffering and violent conflict. The devastating fires in Australia are a sign of what lies before us, and a testimony that, on so many levels, our current pollution of the earth is stealing the future from coming generations. Because the trajectory of danger unleashed by fossil fuels is increasing so rapidly, the next ten years are critical to staunching the threat to our planet.

Last year, over 440 scientific papers were published that cast doubt on climate alarmism and the claim that man-made carbon emissions are causing changes to the climate.

Carleton University professor Michael Hart argued in his 2016 book Hubris that “climate change” advocacy is based on “poor science” and is being used as a Trojan horse for ramming through a social agenda on an unsuspecting population.

McElroy took a swipe at the Trump administration in this speech, saying: “The United States, which was once a leader in this effort, has in the current Administration become the leader in resisting efforts to combat climate change and in denying its existence.”

“As a consequence, the survival of the planet, which is the prerequisite for all human life, is at risk.”

While pitting the concept of “intrinsic evil” against the varying gravity of “moral evils”, the Bishop also stated that abandoning a global environmental initiative was a “greater moral evil” that the distribution of contraceptives.

“…Contraception is intrinsically evil in Catholic moral theology, while actions which destroy the environment generally are not,” he said. “But it is a far greater moral evil for our country to abandon the Paris Climate Accord than to provide contraceptives in federal health centers. What these examples point out is that Catholic social teaching cannot be reduced to a deductivist model when it comes to voting to safeguard the life and dignity of the human person.”

Michael Hichborn, President of the Lepanto Institute, told LifeSiteNews that Bishop McElroy has “shifted his allegiance” from being a shepherd of souls to advocating for worldly concerns.

“In one meeting, Bishop McElroy has clearly shifted his allegiance away from Christ and souls to politics and the world,” he said.

“A man concerned with the salvation of souls would speak the truth regarding individual salvation and damnation. Instead, Bishop McElroy speaks of policies regarding dubious scientific theories while promoting political cash cows that benefit the USCCB as greater than moral matters that lead souls to Hell.”

Hichborn called McElroy’s statement that claimed that abandoning the Paris Accords “is a far greater moral evil” than the provision of contraception “a reprehensible lie.”

“No one ever went to Hell for making a prudential political decision regarding unsettled scientific concerns,” he said, “but the use of what McElroy himself acknowledged is an intrinsic evil is currently sending countless souls to Hell.”

“As Fatima seer Sr. Lucia revealed, ‘More souls go to Hell for sins of the flesh than for any other reason.’”

The issue of abortion as the pre-eminent social issue of our time was raissed at the USCCB general assembly in November. Bishop McElroy objected to the statement in the USCCB’s document on political life, “Forming Consciences for Faithful Citizens” that protecting the unborn is their “preeminent” social justice priority.

“It is not Catholic teaching that abortion is the pre-eminent issue that we face as the world in Catholic social teaching,” McElroy said.

The Bishop of San Diego also said he believes that saying the threat of abortion remains the USCCB’s “pre-eminent priority” is “at least discordant with the pope’s teaching if not inconsistent” and that it is a “grave disservice to our people if we’re trying to communicate to them what the Magisterium teaches.”

He was contradicted by Bishop Joseph Strickland of Tyler, Texas and Archbishop Charles J. Chaput of Philadelphia. Strickland stated that the word “pre-eminent” must remain in the letter, and Chaput underscored that abortion is indeed the most important social issue of our time.

After a USCCB ad limina visit to Pope Francis this January, Archbishop Joseph F. Naumann of Kansas City, chairman of the USCCB Committee for Pro-Life Activities  told Catholic News Service (CNS) that the Pope agreed with the U.S. bishops in “identifying the protection of the unborn as a preeminent priority.”