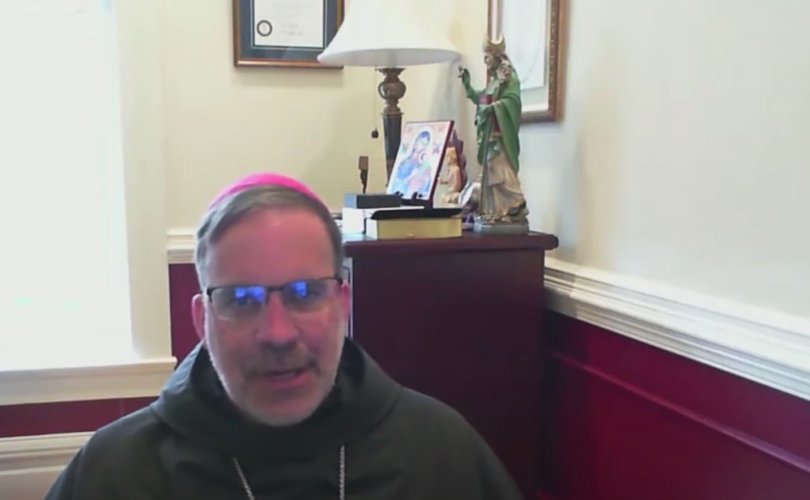 LEXINGTON, Kentucky, September 16, 2020 (LifeSiteNews) – Bishop John Stowe suggested last Thursday that the environment is the preeminent issues for Catholic voters to consider, not abortion. “They are both critical issues,” the pro-homosexual bishop of Lexington, Kentucky, admitted. “I think an argument could be made that … creation is the preeminent issue, because without the environment to sustain human life, you can’t have human life.”

The bishop of Lexington, Kentucky, made his remarks during a webinar hosted by Catholic Climate Covenant.

“We have to look at what office are we voting people into – what office are we electing for and what is their role in that office,” Stowe continued. “We’ve seen what the current President can do by withdrawing from an international treaty about protecting the environment, and the effect that that has had immediately.”

On the other hand, the bishop said, “We have unfortunately lived with abortion as interpreted as a right since 1973. After many administrations of both parties, that hasn’t changed, so when we look at just the immediacy and the role of office and what effect they have, I think that can weigh in on that decision.”

Stowe also criticized the United States Conference of Catholic Bishops (USCCB) for its document “Forming Consciences for Faithful Citizenship,” which included language qualifying abortion as the “preeminent priority” for voters to be concerned about.

“The threat of abortion remains our preeminent priority because it directly attacks life itself, because it takes place within the sanctuary of the family, and because of the number of lives destroyed,” the bishops wrote.

In another place, they added, “In our nation, ‘abortion and euthanasia have become preeminent threats to human dignity because they directly attack life itself, the most fundamental human good and the condition for all others.’”

“I voted against the inclusion of that language,” said Stowe, arguing it was confusing terminology.

“I do understand the logic of it being preeminent,” he conceded, “because without the right to life the other human rights don’t come into existence. So I do understand it on one level, but unfortunately it gives people the permission to think it’s the only one that matters, and I don’t think that was the intention of the document.”

“It goes against other parts of the document that tell us not to be single issue voters, so if we do take that web of life kind of spirituality, we see the interconnectedness of all these issues,” Stowe pointed out. “Pope Francis has done a great job of leading us towards that. I think the unnecessary inclusion of that word took a step backward.”

The USCCB’s document itself indeed asked Catholics to focus not simply on one issue. However, it qualified that any candidate’s “position on a single issue is not sufficient to guarantee a voter’s support. Yet if a candidate’s position on a single issue promotes an intrinsically evil act, such as legal abortion, redefining marriage in a way that denies its essential meaning, or racist behavior, a voter may legitimately disqualify a candidate from receiving support.”

For faithful Catholics, a politician’s position on abortion and other life issues, including euthanasia, is of key importance.

Pope Benedict XVI, in 2006, identified three “principles which are not negotiable” in politics.

He first mentioned the “protection of life in all its stages, from the first moment of conception until natural death.”

Finally, the Pope emeritus listed “the protection of the right of parents to educate their children.”

In July, Bishop Stowe had discredited President Trump as not really being pro-life.

“For this President to call himself pro-life, and for anybody to back him because of claims of being pro-life, is almost willful ignorance,” he said. “He is so much anti-life because he is only concerned about himself, and he gives us every, every, every indication of that.”

“Yes, we have to be concerned for the unborn children,” the bishop said at the time. “It’s foundational for us, but it’s all connected,” and “our understanding of pro-life has to be the vision that was described as the seamless garment vision.”

Bishop Stowe also used the July webinar to once again express his support for homosexuality and gender ideology, explicitly saying, “Our understanding of family has to change.”

“We have to be in a different understanding of family, and that’s where the LGBT issues come into play,” he said. “I agree completely with (another webinar participant) that our credibility is on the line with the whole generation, and more, of young people who just don’t buy that teaching, and know from their experience, and know from the people that they know, that there are good and loving people that happen to identify as LGBT, and that’s part of who they are.”