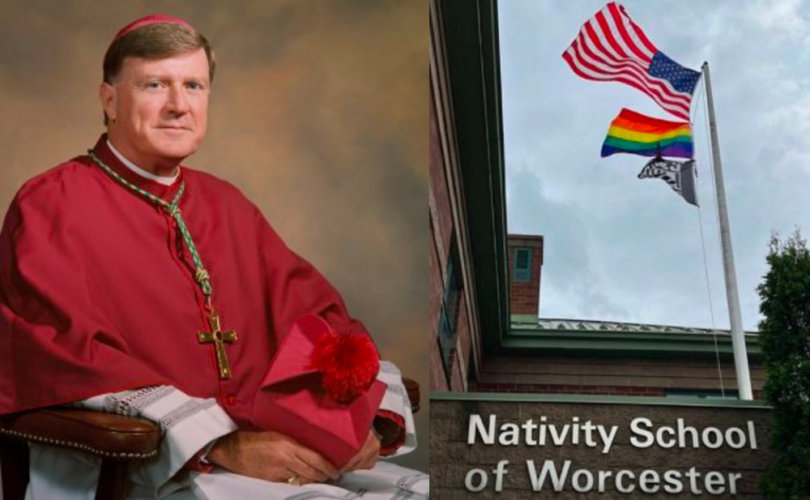 WORCESTER, Massachusetts (LifeSiteNews) – The Catholic bishop of the Diocese of Worcester has removed the “Catholic” status from a Jesuit-run school after it refused to heed his orders not to fly the LGBT rainbow flag and the Black Lives Matter flag.

In a decree issued June 16, Bishop Robert J. McManus rebuked the Jesuit-run Nativity School in Worcester, Massachusetts, for ignoring his previous directives about the flying of the “pride” and Black Lives Matter (BLM) flags.

“Despite my insistence that the school administration remove these flags because of the confusion and the properly theological scandal that they do and can promote, they refuse to do so. This leaves me no other option but to take canonical action,” he wrote.

The school, established in 2007, is for boys in Grades 5–8 and describes itself as “Roman Catholic/Jesuit.” It had been flying the two flags since January 2021 – at the desire of the students, according to the school – and replaced the flags after an unknown individual tore them down in March this year.

Bishop McManus had originally written in April 2022, ordering the school to remove the rainbow and BLM flags under the threat of losing its Catholic identity. “I must teach that it is imperative that a Catholic School use imagery and symbols which are reflective of that school’s values and principles so as to be clear with young people who are being spiritually and morally formed for the future,” he wrote.

He reiterated this warning one month later when he wrote an open letter warning that the LGBT and BLM flags “embody specific agendas or ideologies contradict Catholic social and moral teaching.”

The “‘Gay Pride’ flag represents support of gay marriage and actively living a LGBTQ+ lifestyle,” wrote McManus, while the BLM movement “directly contradicts Catholic social teaching on the importance and role of the nuclear family and seeks to disrupt the family structure in clear opposition to the teachings of the Catholic Church.”

Until April 2020, the Black Lives Matter Global Network Foundation had a section on its website saying that it disrupts “the Western-prescribed nuclear family.”“We disrupt the Western-prescribed nuclear family structure requirement by supporting each other as extended families and ‘villages’ that collectively care for one another, especially our children, to the degree that mothers, parents, and children are comfortable,” the BLM website previously said.

READ: Pro-BLM school board member under investigation for sex abuse of 60+ students

Given the school’s insistence on flying the two flags, along with its claimed Catholic status, McManus said that such an action “sends a mixed, confusing and scandalous message to the public about the Church’s stance on these important moral and social issues.”

Thus, in his decree dated June 10, the bishop appealed to Canon Law and the Dicastery for Catholic Education in exercising his “legitimate authority as the guardian and overseer of Catholic education in the Diocese of Worcester.”

After “prayerful consideration” McManus wrote to invoke Canon 381 §1 and order that:

The Nativity School of Worcester is prohibited from this time forward from identifying itself as a “Catholic” school and may no longer use the title “Catholic” to describe itself;

• Mass, sacraments and sacramentals are no longer permitted to be celebrated on Nativity School premises or be sponsored by Nativity School in any church building or chapel within the Diocese of Worcester;

• The Nativity School is not allowed to undertake any fundraising involving diocesan institutions in the Diocese of Worcester and is not permitted to be listed or advertise in the Diocesan Directory;

• The name of Bishop Emeritus Daniel P. Reilly must be removed from the list of the Board of Trustees of Nativity School.

Following the bishop’s letter, but prior to its publication on the diocesan website, Nativity School published a statement revealing it would “seek to appeal the decision” to have its Catholic designation stripped by going through the “appropriate channels provided by the Church in circumstances like this.”

However, the school noted that while doing this, despite the repeated order from Bishop McManus, it would not remove the “pride” or BLM flags.

At the same time, after meaningful deliberation and discernment by its Board, leadership team, faculty, and partners, Nativity will continue to display the flags in question to give visible witness to the school’s solidarity with our students, families, and their communities. Commitment to our mission, grounded and animated by Gospel values, Catholic Social Teaching, and our Jesuit heritage compels us to do so.

The Catholic Church teaches that homosexuality is a grave evil and intrinsically disordered and that God creates all human beings either male or female.

— Article continues below Petition —
Stand with the MLB players who refuse to wear Pride colors
Show Petition Text
12558 have signed the petition.
Let's get to 15000!
Thank you for signing this petition!
Add your signature:
Show Petition Text

While the school rejected the bishop’s demand, and McManus was vilified on Twitter by supporters of the Jesuit school, he earned support from Catholics online, with Father Jesusmary Missigbètò calling him “a brave bishop.”

Thank God!
A brave bishop!
Like @ArchCordileone!
Still praying that @ArchbishopGomez will publicly support the ban on Holy Communion for pro-abortion Catholic politicians…

Catholic Culture’s Phil Lawler praised McManus, suggesting that “[t]o the best of my knowledge—and I have been watching carefully—no American bishop has ever taken this step before.”