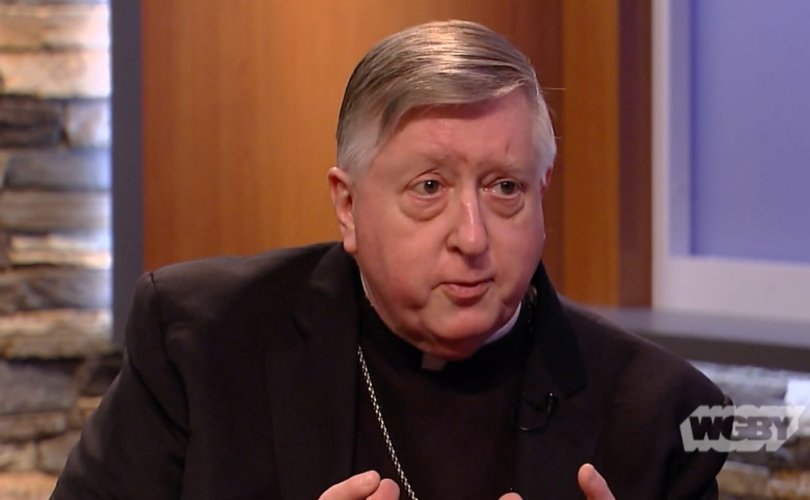 SPRINGFIELD, March 31, 2020 (LifeSiteNews) — The bishop of Springfield, Massachusetts, has temporarily suspended last rites in all instances in his diocese in response to the coronavirus pandemic.

Rozanski wrote to his priests March 25 that he was “allowing the assigned Catholic hospital chaplains, standing outside a patient’s room or away from their bedside, to dab a cotton swab with Holy Oil and then allow a nurse to enter the patient’s room and administer the oil,” according to CNA.

“If the patient is alert, the prayers may be provided via telephone,” the bishop wrote.

However, Bishop Leonard Blair of Hartford, chair of the USCCB committee on liturgy, said in last Friday’s memo that “it is not possible for the anointing with oil to be delegated to someone else, such as a nurse or doctor.”

The same afternoon, Rozanski sent his priests a message stating that: “After further discussion and review, I am rescinding my previous directive and temporarily suspending the Anointing of the Sick in all instances.”

LifeSiteNews contacted the diocese to confirm this but did not hear back by deadline.

Adding to the calamity, some hospitals are banning priests from attending to the dying, such as Grand Rapids, Michigan, as reported last week by LifeSiteNews, and Portland, Oregon, as reported by Catholic News Service.

The Catholic Church holds that persons who are extremely ill or near death are in great need of spiritual assistance. The Church provides Catholics at those stages of life with the sacrament of anointing of the sick, otherwise known as extreme unction or last rites, which can only be conferred in person and by a priest.

“The first grace of this sacrament is one of strengthening, peace and courage to overcome the difficulties that go with the condition of serious illness or the frailty of old age. This grace is a gift of the Holy Spirit, who renews trust and faith in God and strengthens against the temptations of the evil one, the temptation to discouragement and anguish in the face of death,” according to the Catechism of the Catholic Church.

“This assistance from the Lord by the power of his Spirit is meant to lead the sick person to healing of the soul, but also of the body if such is God’s will. Furthermore, ‘if he has committed sins, he will be forgiven,’” it notes.

That a bishop could purport to authorize the enunciation of sacramental form for Anointing by a cleric and the execution of the sacramental matter by a hospital worker gives some insight into what kind of challenges confront sound pastors and canonists these days. But, while that bizarre idea was shot down in a few hours thanks to the internet, a new mess has taken its place, one whereby a bishop thinks he can “suspend” the celebration of the sacrament of Anointing in times of greatest need!

Keeping this short, I know of no authority whereby an arch/bishop can “suspend” the operation of a sacrament itself so I can only conclude that whenever a proper, willing minister utters the correct form while applying the necessary matter to an eligible, willing, recipient, the sacrament occurs. All of the usual considerations for the administration of sacraments in time of serious danger apply, of course, and those factors lean heavily (not uniformly, but heavily) in favor of administration of the sacraments, especially to the gravely ill.  Again, if some bishop actually issues a precept against celebrating Anointing, it can be dealt with then.

Rozanski’s suspension of last rites follows other directives from bishops suspending sacraments, with Cardinal Tobin of Newark suspending confession except in extreme emergency, Archbishop Thompson of Indianapolis directing priests to postpone confession except when penitent in danger of death, and Cardinal Blase Cupich of Chicago suspending baptisms.

However, Bishop Athanasias Schneider said in an interview with The Remnant that priests, using discretion and following the necessary health precautions “has not to obey the directives of his bishop or the government” to withhold the sacraments.

Directives canceling all public Masses “are a pure human law; however, the supreme law in the Church is the salvation of souls,” Schneider said.

Canon lawyer Philip Gray echoed this, pointing out in a previous LifeSiteNews report that bishops issuing blanket prohibitions on the sacraments is a violation of canon law, and priests can disregard these directives in good conscience.

“We’re talking about the life and death of the soul,” said Gray, president of the St. Joseph Foundation and Catholics United for the Faith.

Catholics in good standing have a right to receive the sacraments if they ask for them at an appropriate time and are well disposed, he told LifeSiteNews.

“There are reasonable measures that a bishop can put in place to allow all the sacraments to continue. That is what Christ would expect of us. These are the ordinary means of salvation,” Gray said.

Blair wrote in his memo that questions regarding the administration of the sacraments during the coronavirus, or Wuhan flu, pandemic were sent to the apostolic nuncio for the United States, Archbishop Christophe Pierre, who consulted Archbishop Arthur Roche, secretary of the Vatican’s Congregation for Divine Worship and Sacraments, for the answers, CNA reported.

He suggested to the bishops that when it is not possible to administer last rites, this passage from the March 20 Vatican note on administering confession during the pandemic “might be applied analogously to the sacrament of the sick”:

Where the individual faithful find themselves in the painful impossibility of receiving sacramental absolution, it should be remembered that perfect contrition, coming from the love of God, beloved above all things, expressed by a sincere request for forgiveness (that which the penitent is at present able to express) and accompanied by votum confessionis, that is, by the firm resolution to have recourse, as soon as possible, to sacramental confession, obtains forgiveness of sins, even mortal ones.

Catholic philosopher and writer Dr. Peter Kwasniewski told LifeSiteNews in comments on confession, that could be applied analogously to last rites, that priests have a “solemn obligation” to “hear confessions of the faithful who are in mortal sin and therefore in danger of damnation.”