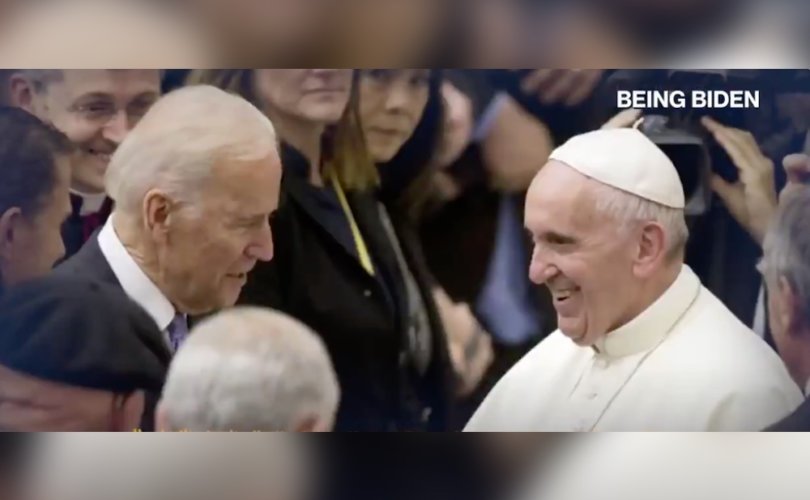 August 13, 2020 (LifeSiteNews) — An American bishop sparked a heated Twitter debate over what constitutes a Catholic when he sarcastically implied this week that Democratic presidential candidate Joe Biden isn’t one.

Bishop Thomas Tobin of Providence, Rhode Island, was also hammered on Twitter with ad hominem attacks after he posted this Tuesday:

Biden-Harris. First time in awhile that the Democratic ticket hasn’t had a Catholic on it. Sad.

Biden, also endorsed by Planned Parenthood, is likewise known for abandoning any pro-life views he once held (he dropped his support of the Hyde Amendment banning federal funding for most abortions in June 2019) and adopting policies that directly conflict with Catholic teaching.

Biden declared during the coronavirus crisis that abortion is an “essential healthcare service,” and promised that if he wins the election, he will direct the Justice Department to “do everything in its power” to block state laws that place any restriction on abortion, including parental notification requirements, ultrasound laws, and waiting periods.

Moreover, Biden supports the killing of the elderly, disabled, and medically vulnerable through euthanasia and assisted suicide, has personally conducted “gay weddings,” endorses the overtly marxist Black Lives Matter (BLM) movement that seeks to disrupt the nuclear family, his “environmental policies are built on the population control principles of abortion and contraception in direct opposition to the teaching of Pope Francis on the environment,” and he has vowed to resurrect Obama-era policies that would force the Little Sisters of the Poor to violate their religious beliefs and provide contraceptives and abortifacients to their employees, as LifeSite’s Doug Mainwaring reported last month.

Nevertheless, Biden is leaning heavily on his Catholicism in his presidential run, releasing a campaign video last week that highlights his apparent friendship with Pope Francis and the values they allegedly share, as well as his admiration for nuns, who taught him.

Pope Francis also was featured in a video Biden’s campaign released earlier this year in which the Democratic candidate says he goes to Mass, prays the rosary and that faith is what has helped him through the most difficult moments in his life.

Given the stakes, Tobin’s tweet evidently touched a nerve and in the ensuing debate LGBT advocate Fr. James Martin argued, as did many, that Biden is a Catholic by virtue of his baptism.

Mr. Biden is a baptized Catholic. Thus, he is a Catholic. https://t.co/IcO70zhKHd

However, one participant brought up a papal document that seems to tilt the argument heavily in Tobin’s favor.

22. Actually only those are to be included as members of the Church who have been baptized and profess the true faith, and who have not been so unfortunate as to separate themselves from the unity of the Body, or been excluded by legitimate authority for grave faults committed. “For in one spirit” says the Apostle, “were we all baptized into one Body, whether Jews or Gentiles, whether bond or free.” As therefore in the true Christian community there is only one Body, one Spirit, one Lord, and one Baptism, so there can be only one faith. And therefore, if a man refuses to hear the Church, let him be considered — so the Lord commands — as a heathen and a publican. It follows that those who are divided in faith or government cannot be living in the unity of such a Body, nor can they be living the life of its one Divine Spirit.

Many opposed to Tobin’s view simply attacked him by bringing up his 2018 admission that as auxiliary bishop of Pittsburgh in 1992 and 1996 he “became aware of incidents of sexual abuse when they were reported to the diocese,” but did not report them as this was not his area of responsibility, or opined that if a Catholic prelate was going to get into politics, the Church should pay taxes.