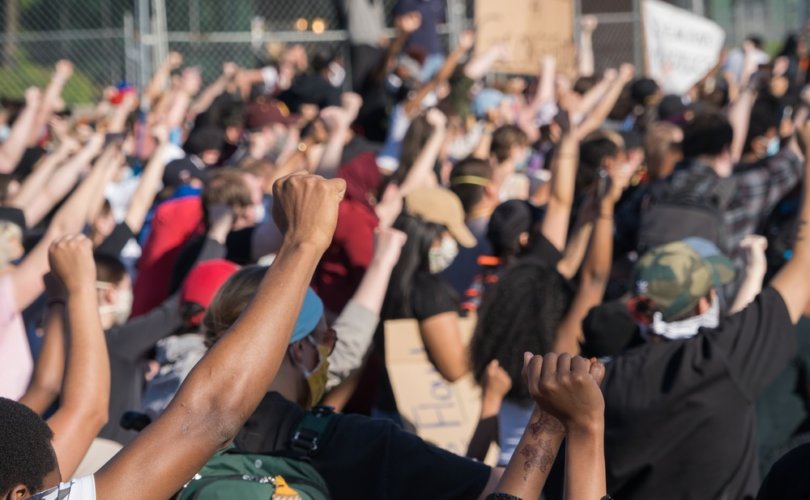 PARTLOW, Virginia, June 12, 2020 (LifeSiteNews) — A new investigation by the Lepanto Institute has revealed that the bishops in the United States, through their Catholic Campaign for Human Development (CCHD), are funding organizations that support riots and whose goal includes not only defunding police, but even killing them.

According to the United States Conference of Catholic Bishops (USCCB), the CCHD “is the national anti-poverty program of the U.S. Catholic Bishops, working to carry out the mission of Jesus Christ ‘… to bring glad tidings to the poor … liberty to captives … sight to the blind, and let the oppressed go free.’ (Luke 4:18)”

Michael Hichborn, who runs the Lepanto Institute, pointed to four groups who have received money from the CCHD and are now agitating against law and order in the United States amid the riots in the wake of the death of George Floyd.

One of the organizations, the New Orleans Workers’ Center for Racial Justice (NOWCRJ), “received $150,000 from the CCHD over the last three years, including last year’s grant of $50,000.” On May 30, the Lepanto Institute reported, “NOWCRJ posted a video on [T]witter of a protest they were participating in, chanting ‘Death to the racist pigs,’ about police.”

Similarly, the Workers’ Center of Central New York received $200,000 over the last few years. On May 29, the organization wrote on Facebook that “these riots and lootings are taking back what the masses of working black and brown communities are owed. Riots and protests are necessary tools and we fully support … An injury to one is a [sic] injury to all.”

Additionally, the Workers’ Center explicitly and publicly called for defunding the police in a Facebook post earlier this month.

Both the NOWCRJ and the Workers’ Center of Central New York display a clenched fist as their logo. As the Lepanto Institute pointed out, the clenched fist “is a hallmark of Marxist revolution.”

The third group working to undermine the rule of law in the United States is The People’s Lobby Education Institute, based in Chicago. The CCHD gave $165,000 to the group in the last three years. Through social media, the group repeatedly called for the defunding of the police as well as the defunding of prisons.

The Workers’ Defense Project received as much money from the CCHD over the past three years as did The People’s Lobby Education Institute. In a tweet, the group accused Houston police of “murdering PoC [people of color] with impunity,” followed by the obligatory call to defund the police.

The organization also praised homosexuality, the practice of which, according to Catholic teaching, is an act “of great depravity.”

Several other groups funded by the CCHD have signed a Solidarity Letter from the Immigrant Justice Movement, which called “to dismantle the police state by defunding and decreasing police budgets.”

The CCHD claims to provide “the Catholic faithful with concrete opportunities to live out the love of God and neighbor in ways that express our baptismal call and continuing Eucharistic transformation.” Additionally, the bishops’ Catholic Campaign for Human Development states that it is “pro-life, pro-family, and pro-community and will never do anything to undermine that commitment.”

It is unclear how support for an end to the rule of law in the United States fits into that mission.

The USCCB did not immediately answer LifeSiteNews’s request for comment.

While the CCHD funds radical organizations, the CCHD in turn is funded, as the USCCB points out, “by the generous support of Catholics in the United States, especially through an annual parish collection.”

In a previous investigation, the Lepanto Institute found that “at the very core of the CCHD is a philosophy of revolutionary leftist ideologies.”

The 2015 investigation looked at several groups funded by the CCHD, giving the reader “an idea of just how Catholic money is being funneled to Communist, pro-abortion, pro-homosexual front groups.”

CCHD director Ralph McCloud, the Lepanto Institute pointed out at the time, had served “as a city council member and mayor pro tem in Fort Worth, Texas. While still serving in Texas government, McCloud gave a political endorsement to radical pro-abortion politician Wendy Davis when she announced her run for state senate against the solidly pro-life incumbent, Kim Brimer.”

McCloud also spoke at an event celebrating the election of Barack Obama in 2008. “Just listen to what McCloud said about how this celebration of Obama’s election is a ‘great day’ where ‘we will see a new Jerusalem, and justice will flow like waters,’” the Lepanto Institute commented.

McCloud is still the director of the CCHD.

“It’s important to state here,” the Lepanto Institute wrote, “that while Ralph McCloud may not be a Communist himself, and may very well have every good intention in serving the Church in the way he believes is best, the network of CCHD-funded groups pushing radical ideological agendas under the banner of justice clearly follows the Marxist paradigm, and has since the founding of the CCHD. And Ralph McCloud is very much a part of that.”