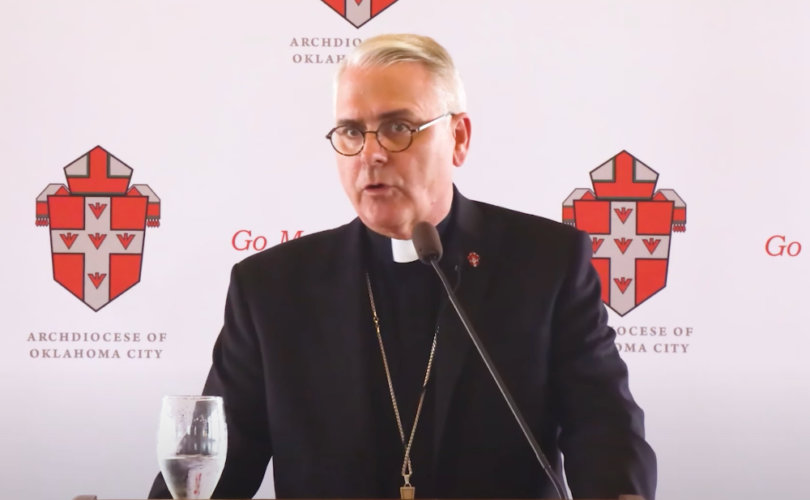 BALTIMORE (LifeSiteNews) — Oklahoma City Archbishop Paul Coakley was elected U.S. Conference of Catholic Bishops secretary over pro-LGBT Cardinal Joseph Tobin of Newark, New Jersey at their fall meetings this week. Coakley’s outspoken orthodoxy on the Church’s moral teachings have been noted by Catholics concerned that liberal bishops such as Tobin would steer the Church in the U.S. toward an acceptance of LGBT ideology and lifestyles.

Coakley was elected secretary in a 130-104 vote on November 16. As LifeSiteNews reported earlier this week, “Archbishop Paul Coakley of Oklahoma City has a history of supporting Church doctrine on life and sexuality and has said that politicians who support abortion and same-sex ‘marriage’ should be denied the Eucharist. He was one of a few bishops who publicly supported Archbishop (Salvatore) Cordileone’s ban on Communion for House Speaker Nancy Pelosi earlier this year and has described the motivation behind the transgender movement as ‘demonic.’”

The archbishop’s public words against transgender ideology in 2016 were especially strong. He said it runs contrary to “science, philosophy, theology and the accumulated wisdom of every culture.” Underscoring the objective reality of the differences of the sexes, he said they are “rooted in biology and, more fundamentally, they are rooted in the design of the Creator.”

Calling the rejection of the divine design for human nature “demonic,” he said, “It seems clear to me that battle lines are being drawn very clear. And these lines are about more than government overreach. This is a spiritual battle between Light and darkness.”

However, Coakley’s noted orthodoxy stands in contrast to his defense of Catholic Relief Services — over which he presided — regarding accusations and evidence that it oversaw the promotion of contraception in third world countries. Coakley also praised the Biden administration’s 2021 infrastructure bill despite its pro-LGBT provisions and the inclusion of funding for abortion.

Cardinal Tobin, the other candidate for secretary to the bishops’ conference, made headlines in 2018 for his infamous “nighty-night baby” message and is strongly supportive of LGBT groups within the Church. In 2021, Tobin was appointed by Pope Francis to the Congregation, now Dicastery, for Bishops.

— Article continues below Petition —
Stand with faithful Archbishop Timothy Broglio as the NEW President of the United States Conference of Catholic Bishops!
Show Petition Text
9382 have signed the petition.
Let's get to 10000!
Thank you for signing this petition!
Add your signature:
Show Petition Text