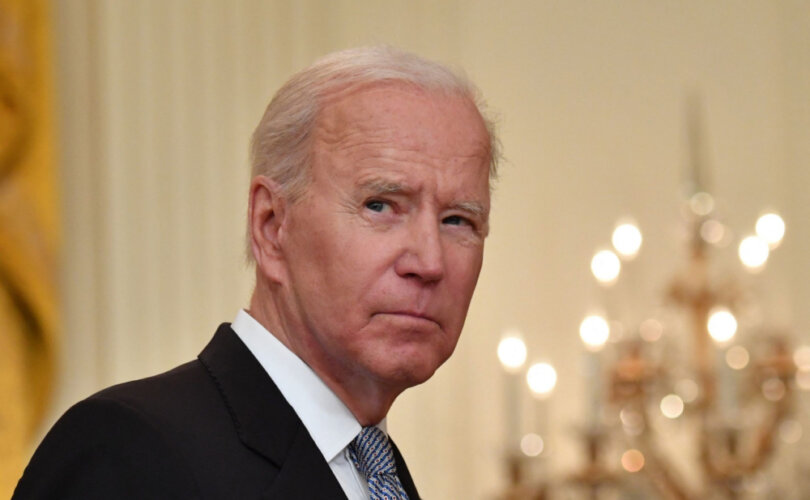 WASHINGTON, D.C. (LifeSiteNews) — While the U.S. Conference of Catholic Bishops (USCCB) issued a statement of condemnation both before and after the Senate’s passage of the so-called “Respect for Marriage Act” (RMA), which enshrines “same-sex marriage” into federal law, no such condemnation has been forthcoming since President Joe Biden signed the bill into law on Dec. 13.

LifeSiteNews reached out to the USCCB to request comment and a formal statement denouncing the president signing the law but has received no reply.

Together with the Supreme Court ruling in Obergefell — which the USCCB denounced — the signing of the RMA constitutes the gravest threat to marriage that the nation has seen to date. And if the threat merited the opposition of the Catholic bishops before its passage, why the resounding silence since? No mention of the law, no lament, no condemnation of the so-called Catholic president who has done more to undermine the sanctity of marriage and human life than any previous President of the United States.

To be sure, among the Catholic episcopacy, there are some courageous and outspoken bishops, notably Bishop Joseph Strickland of Tyler, Texas, and Archbishop Paul Coakley of Oklahoma City. Yet they stand out precisely because of the silence of their fellow shepherds, and now the silence of the USCCB in Washington, D.C.

Why the silence? Is it fear of reprisal from the aggressively anti-marriage, anti-life, and anti-Catholic Biden administration? Is it for fear of a reduction in funding from the federal government? Is it because marriage is not that important an issue after all? Is it because the attacks on marriage are actually not limited to the political sphere but have entered the ranks of the Church’s hierarchy as well, with Fr. James Martin promoting LGBT lifestyles at every turn, Cardinals Blasé Cupich and Robert McElroy insisting on admission of the divorced and remarried to Holy Communion, and a Church in Chicago allowing a gay “couple” to preach from the pulpit on Fathers’ Day?

READ: US archbishop denounces ‘madness’ of LGBT ideology in address to Catholic businessmen

There is indeed a serious crisis in marriage today. It comes in the form of Supreme Court rulings determining a “constitutional right” to “same-sex marriage.” It comes in the form of Congressional passage of a bill enshrining the fictional “right” into federal law. It comes in the form of Catholic President Joe Biden signing the bill into law and vowing to do all in his power to enforce its implementation and to demonize its opponents. However, it also comes, perhaps more insidiously, in the form of bishops and priests preaching a new LGBT “gospel” and the silence of the shepherds of Christ’s flock in the face of attacks.

RELATED: Pope Francis’ American cardinals are pro-LGBT revolutionaries with a radical agenda for the Church

The Catholic president strikingly resembles King Herod at Christ’s birth and death. The first ruthlessly slew the Holy Innocents in a vain attempt to kill the Christ Child, the second sinned against marriage and cut off the head of John the Baptist when he raised his voice in prophetic rebuke. President Biden has pushed abortion at every turn, vowing to codify the slaughter of the innocents by enshrining abortion into federal law, much as he has now codified into federal law the gravest threat to marriage our nation has ever seen.

Like the Herod at Christ’s birth, our nation’s president has on his hands the blood of countless babies. Like the Herod at Christ’s death, he has vowed to silence any who oppose his affront to the sanctity of marriage, an institution established by God the Creator when He first made man male and female — an institution elevated by Jesus Christ to the dignity of a sacrament.

Against the two Herods, our Savior’s forerunner, inspired by the Holy Spirit, bore witness to Christ while yet in his mother’s womb, and after revealing the Messiah to the world at the Jordan, raised his voice in defense of marriage and the law of God. It is striking that, given the stature of John the Baptist and his unique role in salvation, it would please God that he should be martyred for his unswerving witness to the inviolability of marriage and his fearless rebuke of Herod’s offense against it.

In the face of the deafening silence of the USCCB at the affront of our “Catholic” president to the dignity and sanctity of marriage, the faithful cannot but call to mind the words of the prophet Isaiah regarding the “watchmen” who refuse to speak out against the wicked: They are “dumb dogs not able to bark.” (Isaiah 56:10)

America is not lacking its Herod today. Where is its John the Baptist?

No room for ‘inclusion’: Homosexuality and transgenderism are sins against nature itself

Bp. Strickland: Catholics must reject the preaching of false gospels and cling to Christ

US bishop: Too many Church leaders side with pro-abortion Joe Biden