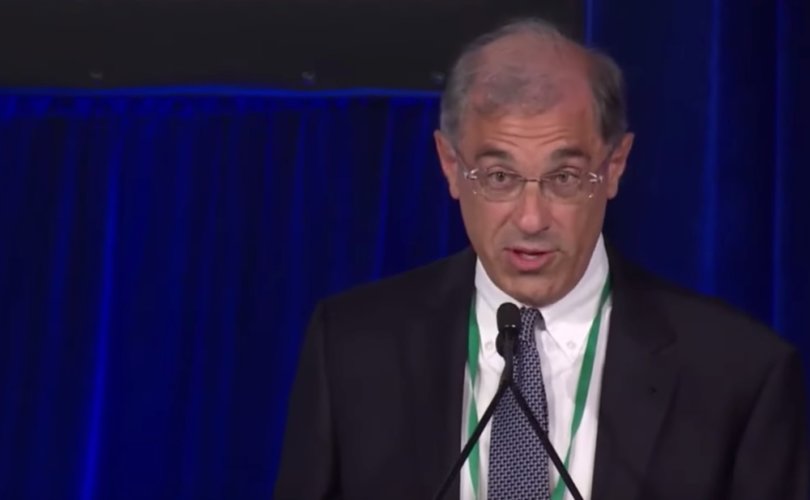 BALTIMORE, Maryland, June 12, 2019 (LifeSiteNews) – In an address to the bishops of the U.S., the lay chairman of their National Review Board (NRB) expressed concern that the systems now being set in place by the Vatican and the United States Conference of Catholic Bishops (USCCB) to handle episcopal sexual misconduct still leave “bishops policing bishops.”

“We find ourselves at a turning point, a critical moment in our history, which will determine in many ways the future vibrancy of the Church, and whether or not trust in your leadership can be restored,” said Chairman Francesco Cesareo, Ph.D.

“Because of the actions or inactions of some bishops, some in the general public have lost confidence in the body of bishops, despite the sincere efforts of many of you,” noted Cesareo.

Cesareo reminded the bishops that last November, the NRB recommended improvements to the Audit – the mechanism in place to review how dioceses deal with sexual abuse allegations – and the Charter for the Protection of Children and Young People which could only be addressed at the national level.

“Any delay in revising the Charter, or in implementing an enhanced Audit, would not only put children at risk, but could signal a step backward in the Church’s efforts.”

“The Audit should be more thorough, and independent,” asserted Cesareo, “and the Charter should be revised immediately to explicitly include bishops and demand for greater accountability.”

Through its deliberations, the NRB concluded that the Audit needs to be “truly independent.”

“Your dioceses have received the same basic Audit for close to 10 years,” noted Cesareo. “A more thorough and independent Audit process would more effectively insure the accountability of your diocesan procedures in conformity with the Charter.”

“Virtually all your dioceses, including those where problems came to light under the microscope of the media or attorneys general, have easily passed the Audit for years, since the bar is currently so low,” continued the NRB chairman.

“Now is the time to raise the bar on compliance to ensure the mistakes of the past are not repeated,” he declared. “The Audit process itself should be developed by the vendor, not bishops.”

Auditors should have the independence to ask the questions that need to be asked, examine the documents they determine need to be examined, and probe where they need to probe to answer questions, resolve issues, and determine compliance with each article of the Charter.

The NRB spokesman strongly urged the bishops to support an independent and improved Audit process immediately.

“Any delay in implementing a new Audit process would be detrimental,” he reiterated. “We cannot afford another crisis as we have just experienced.”

The Charter needs to be revised immediately

Last year’s Charter revision called for the next review to take place in seven years.

“With all that has happened over the last year, we cannot wait until 2025,” said Cesareo.

While the newly issued the moto proprio “Vos estis lux mundi” establishes and defines Church law regarding clerical sex abuse and episcopal accountability, Cesareo said that Charter revisions need to be able to step beyond reflecting the language and spirit of that document, and address the reality of the Church in the United States.

Cesareo wants the bishops to reconsider past NRB proposals to:

“The looseness of the Charter has allowed for problems that could have been avoided,” said Cesareo.

‘Bishops should be held to the same standards as other clerics’

Turning his attention to the accountability of the bishops gathered before him, the chairman asked, “Why should allegations involving priests and deacons be subject to the Audit, but not those involving bishops?”

“Common sense, especially after experiencing the events of last year, tells us that oversight of these processes is necessary,” said Cesareo. “Bishops should be held to the same standards as other clerics.”

Cesareo said that the moto proprio, as well as a new document to be voted on this week by the bishops, titled Affirming Our Episcopal Commitments – which admits past failures and makes prelates subject to the Charter – “begs the question whether these new processes which involve bishops’ accountability should be audited as well.”

“The NRB remains uncomfortable with allowing bishops to review allegations against other bishops as this essentially means ‘bishops policing bishops,’” declared Cesareo.

“The Metropolitan will gain greater credibility if a lay commission is established when allegations come forward to assist in the process as has been the case with lay review boards on the local level.”

“Lay involvement is key,” said Cesareo, “to restoring the credibility of the Church.”

“Not involving laity with competence and expertise in leading the review process would signal a continuation of a culture of self-preservation that would suggest complicity.”

Cesareo noted that while the moto proprio allows for the inclusion of laity in investigations, “This must be the case in the United States, through the establishment of a lay commission either on the national or local level.”

An opportunity to show the world how it’s done

“You have a great opportunity to lead by example,” he continued, “and to help show dioceses and episcopal conferences around the world, not only how important it is for lay involvement to ensure greater accountability and transparency, but also how laity and the episcopacy can be co-responsible for the Church’s well being.”

“A review board, whose membership includes laity, must be tasked with the review of allegations against bishops to restore the trust of the faithful in the bishops, and even in the Holy See’s own processes for holding bishops accountable.”

“The Metropolitan should not be the sole gatekeeper of allegations,” said Cesareo. “This could lead to the same type of mishandling of an allegation as we saw in the case of former Archbishop McCarrick.”

The need to know what the Vatican knows about McCarrick

Cesareo reminded the bishops of the proposed resolution at last November’s meeting calling for the Vatican to release all the documentation regarding the sexual misconduct of disgraced former Archbishop McCarrick. That resolution was ultimately rejected.

“The salvation of souls is the supreme law of the Church,” said Cesareo. “It is more important to heal the rift with the people of God than any perceived divisions you might have with the Holy See.”

Cesareo told the bishops that as the one year anniversary of the eruption of the McCarrick  crisis approaches, an update on the status of the McCarrick investigation from the Holy See is much needed.