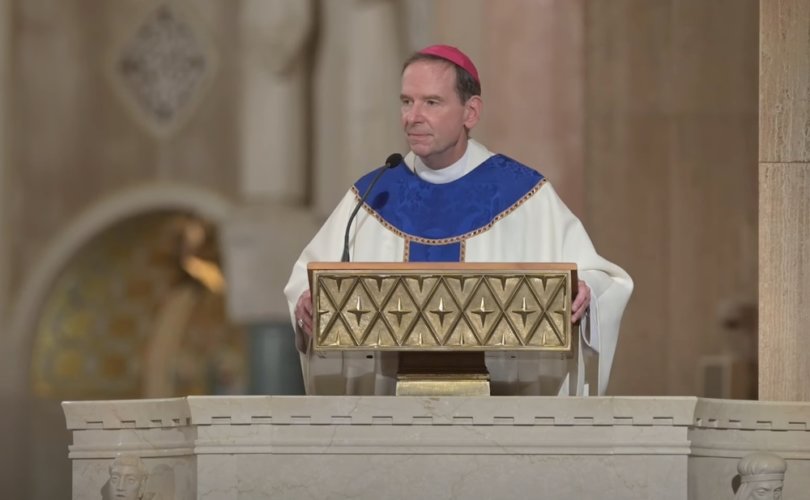 (LifeSiteNews) — The new chairman of the U.S. Conference of Catholic Bishops’ pro-life committee supported the Communion ban on Nancy Pelosi for her radical pro-abortion stance.

On Wednesday, during their annual fall meeting in Baltimore, the U.S. bishops elected Bishop Michael Burbidge instead of Bishop W. Shawn McKnight as chair of their pro-life committee by a vote of 174 to 63.

The election of Burbidge as pro-life chair was one of several leadership decisions the U.S. bishops made during their assembly. Archbishop Timothy Broglio was elected to serve a three-year term as the new president of the U.S. Conference of Catholic Bishops (USCCB), and Archbishop William Lori was elected its vice president. Burbidge will succeed Lori who held the position as pro-life committee chair before him.

When San Francisco Archbishop Salvatore Cordileone barred pro-abortion politician Nancy Pelosi from receiving communion in May, Burbidge upheld the ban in his diocese of Arlington. He said that Cordileone’s directive is “not limited to just a geographical area,” and that he would “respect the decision of Archbishop Cordileone and be consistent with that decision here in the Diocese of Arlington, should that situation occur.”

READ: Virginia bishop says he will enforce Communion ban for Nancy Pelosi in his diocese

— Article continues below Petition —
SIGN: Pope Francis must revoke nomination of pro-abortion atheist to Pontifical Academy for Life
Show Petition Text
9827 have signed the petition.
Let's get to 10000!
Thank you for signing this petition!
Add your signature:
Show Petition Text

Burbidge praised the San Francisco archbishop for barring Pelosi from Holy Communion until she repents, calling Cordileone “a courageous man” who “loves the Lord” and the Catholic Church.

Burbidge also revealed that he has privately instructed individuals “who have continuously scandalized the Church by holding a personal Catholic identity while also publicly advocating for abortion or other inherent moral evils” not to come up for Holy Communion in his diocese.

Moreover, the Arlington prelate publicly condemned President Joe Biden’s plan to codify a national “right to abortion” if Democrats were to win control of Congress. “I condemn abortion and any political tactic that would codify abortion as national policy,” Burbidge said.

“Fundamentally, abortion ends the life of a precious child and deeply wounds the child’s mother,” Burbidge continued. “The role of Congress is to pass laws that serve the common good — and yet this priority of the president only brings about pain and death.”

Burbage has also acted to protect both children and adults from the junk science touted by transgender activists and their allies.

In August 2021, he published a catechetical letter on gender ideology, warning of the “great danger of a misguided charity and false compassion” and told the faithful who interact with a gender-confused individual to avoid using names and pronouns that “contradict the person’s God-given identity” and “reinforce the person’s rejection of the truth.”

In this letter, he also condemned so-called “gender affirming therapy” for children as a “harmful and life-altering path.”

“We must love in the truth, and truth must be accurately conveyed by our words. At the same time, clarity must always be at the service of charity, as part of a broader desire to move people towards the fulness of the truth,” Burbidge’s letter read.

But whereas Burbidge has been a champion of doctrinal truth, he has cracked down on the celebration of the form of Mass attended by those U.S. Catholics most likely to believe it. The bishop of Arlington implemented severe restrictions on the Traditional Latin Mass (TLM), eliminating 13 of 21 Latin Mass locations in the diocese, following Pope Francis’ controversial motu proprio Traditionis Custodes.

In response to the TLM restrictions, 300 Catholics held a pilgrimage march from Arlington to Washington, D.C. to show support for the TLM and express their sorrow over the “cruel and unjust” restriction.

Help 11 Christians Persecuted by FBI for Defending the Preborn
11 Christians are facing indictment by the FBI for trying to save the pre-born in Mt. Juliet, TN. This fundraiser will help support their cost of travel and lodging for appearing in court, and the cost of attorneys for defense.