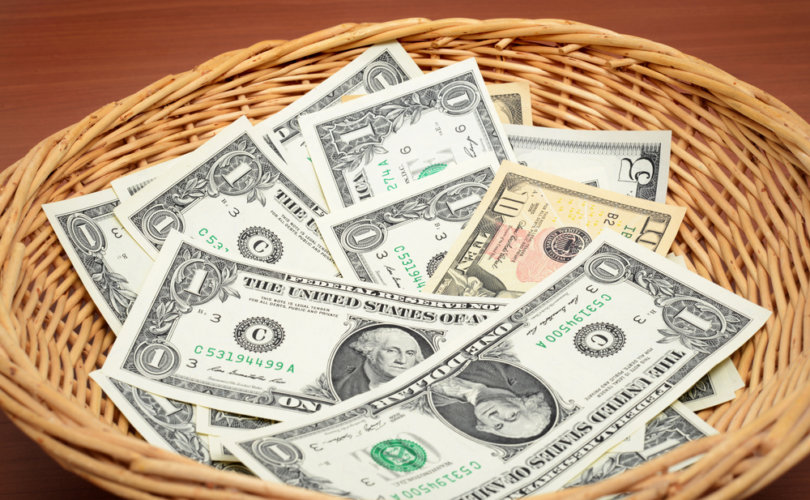 The suit alleges the American bishops “actively” misled Catholics into believing their millions of dollars in donations to the collection would be used to help “victims of war, oppression, natural disaster, or disease,” when in fact much of the money was funneled into private investments, such as Hollywood’s sexually explicit Elton John biopic, “luxury condominium developments” and “hefty, multi-million dollar commissions” to fund managers.

Stanley Law Group filed the lawsuit January 22 in the United States District Court in Rhode Island on behalf of David O’Connell, a parishioner at Sacred Heart Church in East Providence, who is seeking a jury trial, it stated in a press release.

“USCCB must come clean and give back the money it took from well-intentioned people who thought they were giving urgently-needed funds to help the destitute around the world,” said lead attorney Mark Stanley.

“It’s regrettable and tragic that such a trusted and well-respected organization has been taking advantage of the generosity of Catholic donors.”

The firm is also asking American residents who contributed to Peter’s Pence between 2013 and 2019 to consider joining the legal action.

The lawsuit alleges that the USCCB is “liable for common law fraud, unjust enrichment, and breach of fiduciary duty” for “misleadingly soliciting millions of dollars in charitable donations that were diverted into private investments,” the press release states.

According to the 23-page complaint, Peter’s Pence is a “special collection taken from Catholics every June” and is described by the USCCB as a fund that “supports the Pope’s philanthropy by giving the Holy Father the means to provide emergency assistance to those in need because of natural disaster, war, oppression, and disease.”

But a bombshell report in the Italian newspaper L’Espresso in October 2019 exposed a very different story.

L’Espresso reported that “secret internal Vatican investigative reports” showed most of Peter’s Pence funds had been “diverted into ‘reckless speculative operations,’ with 77 per cent of the collections” —  “roughly $560 million” — channeled to the Swiss investment company Credit Suisse, the complaint detailed.

The newspaper also reported that a high-ranking Vatican official asked Italian financier Raffaele Mincione to invest $200 million of the collection, and that Mincione used the money to buy real estate in London “for a luxury apartment development” through a fund he managed, stated the complaint.

When the investment didn’t yield the expected returns, the Vatican pulled out of the fund and bought the property, and Minicone made $170 million on the deal, according to sources cited in the document.

Pope Francis responded in November, stating that the fact that the Vatican invests the money shouldn’t bother anyone, according to Catholic News Services (CNS), the complaint stated.

“The sum of Peter’s Pence arrives and what do I do? Put it in a drawer? No, that’s bad administration. I try to make an investment,” CNS quoted the pope as saying.

That was followed by a further bombshell report in December when Italian newspaper Corriere della Sera broke the news that $1 million of Peter’s Pence donations had been invested in the Elton John biopic Rocketman, and more than $3.6 million in the movie Men in Black: International, the complaint stated.

Moreover, Corriere della Sera reported that “millions of dollars” had been sunk into the Malta-based investment company Centurion Global Fund run by Italian financier Enrioco Crasso, “who received ‘millions of euros in commissions’ while losing 4.61 percent of the fund (approximately two million euros) by the end of 2018.”

The complaint also cited a Wall Street Journal December 2019 report stating that for “at least the past five years, only about 10 percent of the money collected—more than €50 million was raised in 2018—has gone to the sort of charitable causes featured in advertising for the collection.”

Meanwhile, in the summer of 2018, plaintiff O’Donnell’s priest at Sacred Heart made a plea from the pulpit at Sunday Mass for donations to Peter’s Pence, the complaint recounted.

“Nothing [O’Donnell] saw or heard, on that day or beforehand, told him or made him understand that his donations to Peter’s Pence would be used for anything other than emergency assistance to the neediest people around the world.”

The complaint asserted that if O’Donnell had known where the money was going, he would not have donated.

But the USCCB “actively concealed the true character and nature of the Peter’s Pence collection and made misrepresentations about the specified purposes of the collection” that “rendered their statements misleading.”

The USCCB “has always known the difference between a donation for emergency assistance and a donation to defray Vatican expenses” but “hid this distinction in its promotion, oversight, and administration of the Peter’s Pence collection in the United States,” stated the claim.

As a result, the USCCB “has effectively profited at the expense of David O’Connell and members of the public.”

The legal action defines USCCB as “composed of all active and retired members of the Catholic hierarchy in the United States.”

It is asking the district court to certify the proposed class, and for an order enjoining the USCCB “from continuing the unlawful, deceptive, and fraudulent practices alleged in this complaint.”

The complaint is also seeking “costs, restitution, damages and disgorgement in an amount to be determined at trial,” an order for the USCCB to pay pre- and post-judgement interest interest on any amounts awarded, as well as costs and attorney’s fees.