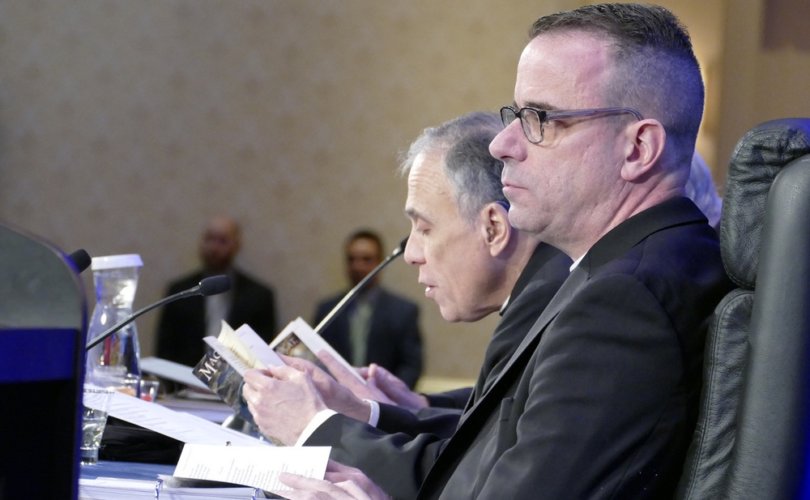 In what was eventually an 83 to 137 vote, the USCCB decided against asking the Vatican for its documentation on the disgraced prelate.

The move was triggered when the Vatican’s Congregation for Bishops at the last minute spiked the U.S. bishops’ plans to pursue acting upon two agenda items intended to deal with the growing crisis precipitated by the cascade of stories of clergy sexual abuse in dioceses across the country.

While the proposed communication to the Holy See consisted of a simple, single 40-word sentence, the prelates were far from unanimous in support for the move.

The discussion that ensued revealed equal parts fear among the members of the USCCB:  fear of anger by laity and priests back in their home dioceses; fear that if they don’t write something they might appear to be passive and uncaring pastors; and fear of offending or being misunderstood by the Holy See.

As one bishop had noted earlier in the day, there is sometimes a dynamic tension between two important principles in the Catholic Church: subsidiarity and community.

Bishop Boyea of the Diocese of Lansing authored the amendment, which aimed to give concrete wording to the USCCB’s motion on Monday:

Be it resolved that the bishops of the United States Conference of Catholic Bishops encourage the Holy See to release all the documentation that can be released consistent with the canon and civil law regarding the misconduct of Archbishop McCarrick.

There was immediate disagreement among the bishops.

Bishop Christensen of Boise proposed adding the word “soon” to the proposal, in order to convey a greater sense of urgency to the Holy See. A vote was taken and the amendment with “soon” added to it was approved 111 to 106.

Some bishops seemed to not like the idea of pushing the Vatican at all.

Cardinal Blase Cupich suggested the bishops would simply be asking the Holy See to do what it already intended to do and others agreed with him.

Cardinal William Levada worried that the communication from the USCCB to the Vatican would not have the desired effect, and joined with Cardinal Joseph Tobin’s suggestion that the bishops simply express support for an October 6 statement from the Holy See.

Bishop David Walkowiak suggested the wording was biased. He proposed the bishops change “misconduct against” to “regarding the allegations.”

The wording was then revised:

As the battle over individual words escalated, so did chuckles from some of the bishops.

Bishop Steven Biegler of the Diocese of Cheyenne said that he understood the concerns that people have, but sometimes we have to take unpopular stances.

“I find this to be an uninformed proposition,” he concluded.

Bishop Michael Fors Olson of the Diocese of Fort Worth,Texas said he found the entire motion to be “subjective and vague.” He suggested that it will serve to make the USCCB “appear like we are doing something when we are not.”

Support for the proposal appeared to have waned during the lively discussion. In a second vote, the motion failed 83 to 137.