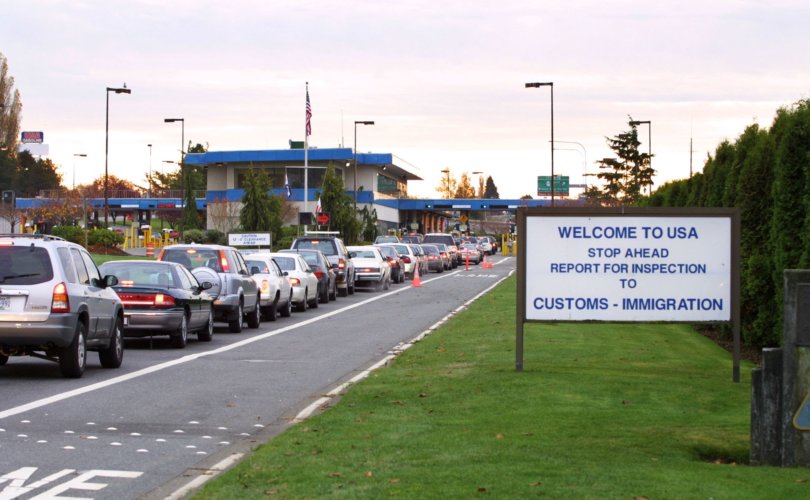 (LifeSiteNews) — Vaccine-free Canadians hoping to cross into the United States via a land border will still be banned from entry after the Biden administration extended a rule mandating that non-U.S. citizens going into the U.S. have the COVID shots.

According to an update yesterday from the Department of Homeland Security (DHS), the vaccine mandate for land border crossings remains in place indefinitely.

“As of Thursday, April 21, 2022, DHS will extend COVID-19-related land border entry requirements. Non-U.S. travelers seeking to enter the United States via land ports of entry and ferry terminals at the U.S.-Mexico and U.S.-Canada borders are required to be fully vaccinated against COVID-19 and provide proof of vaccination upon request,” the DHS said.

The department noted that the restrictions apply to “non-U.S. travelers who are traveling for essential or non-essential reasons. They do not apply to U.S. citizens, Lawful Permanent Residents, or U.S. nationals.”

The “temporary rule” mandating COVID jabs via land border crossings was originally put in place on January 22. According to the U.S Federal Registry, it was set to expire at midnight April 21 before being extended.

Travelers entering the United States by air are mandated as well to prove they have the COVID jabs.

In a statement, she said such mandates hurt northern communities and show the “Biden administration’s hypocrisy.”

According to the DHS, upon entry into the U.S. via a land border, one must “verbally attest to their COVID-19 vaccination status,” and if asked for proof of the vaccine, must show the border agent a “CDC-approved COVID-19 vaccination, as outlined on the CDC website.”

Despite the land border mandate being in place, some have said that they were never asked about their vaccine status by border guards when crossing into the United States.

LifeSiteNews spoke with one individual, who asked to remain anonymous, and he said he had no issues driving into the U.S. via a land border last month despite not having the vaccine.

“They never asked me if I had the jabs, so I was just let on through, and honestly, these jab rules are an afront to a person’s personal dignity and rights as a human,” the individual said.

“Coming back into Canada will be a pain as they still make you quarantine as I don’t have the jabs.”

Others without the jabs trying to cross into the United States via land borders have not been so lucky.

A recent report in the Western Standard documents the horror story of a man without the COVID vaccine who tried in vain to get to Costa Rica. After being denied traveling by air, he tried to cross into the U.S. via car at a land border but was turned back.

While in the past the DHS allowed an “essential” travel exemption, this has been removed.

Children under age 18 are exempt from the rule, however, and there are no COVID testing requirements in place.

Also, there is an exemption for “individuals with medical contraindications to receiving a COVID-19 vaccine as specified in the CDC order.”

Before the rule was put in place in January, the vaccine-free were allowed to cross via land borders into the U.S., including truckers.

However, when the Canadian government under Prime Minister Justin Trudeau mandated that all truckers and others be vaccinated for entry into Canada via land borders starting January 15, the U.S. under President Joe Biden quickly enacted a similar rule.

The Trudeau COVID jab land border mandate was met with fierce opposition from many in the trucking industry, as well as some Conservative Party of Canada MPs.

It was also the catalyst for the trucker Freedom Convoy, which saw thousands of Canadians descend upon Ottawa to demand an end to all COVID mandates.

The Freedom Convoy, however, was crushed by Trudeau in an unprecedented move when he enacted the Emergencies Act to clear them out.

Civil liberties groups have called for an independent public inquiry into Trudeau’s use of the EA.

Also in place in Canada is a travel ban by air, rail or sea for those who have chosen not to get the COVID vaccines.