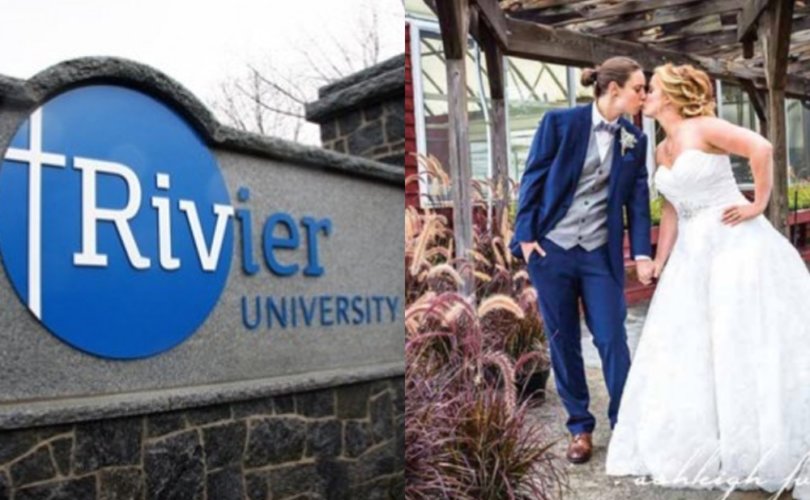 Rivier University administration confirmed to a concerned alumna of the University that the photo in the Weddings section of the spring 2018 issue of Rivier Today was from a “wedding” celebration of a Rivier alumna and another woman.

The photo shows the two women kissing and holding hands, one woman dressed in a male-style suit and shoes, and the other in a wedding dress. The caption contains their names and indicates the alumna’s graduation year, along with the date of the two women’s same-sex “wedding.” The photo is laid out on the publication page with three weddings of other alumni.

The picture is available in the publication’s online edition.

The concerned alumna contacted LifeSiteNews, disturbed by both the photo and the response she got from the University.

“I’m so troubled by this,” Jeanne Doe told LifeSiteNews. Doe, a pseudonym, requested anonymity, but felt she had no choice but to speak up. “This is scandalous, this is against the teachings of the Catholic Church.”

“I thought, “This is terrible if this is what my eyes are seeing,” she said. “I cannot not say anything.”

“For a Catholic university to do this, this cannot go unspoken,” said Doe.

The Catholic Church teaches that homosexual acts, as well as a person’s homosexual orientation, can never be accepted as part of God’s plan for human sexuality.

In a 1986 letter to the Bishops of the Catholic Church on the pastoral care of homosexual persons, the Church taught that the homosexual “inclination itself must be seen as an objective disorder. … [S]pecial concern and pastoral attention should be directed toward those who have this condition, lest they be led to believe that the living out of this orientation in homosexual activity is a morally acceptable option. It is not.”

The Catechism teaches that homosexual acts are “acts of grave depravity” and “intrinsically disordered” since they are “contrary to the natural law” in that they “close the sexual act to the gift of life.”

“They do not proceed from a genuine affective and sexual complementarity. Under no circumstances can they be approved,” it adds.

Rivier University is located in Nashua, New Hampshire, and was founded by the Sisters of the Presentation of Mary in 1933.

The University says in its online welcome information that “Christian and Catholic values” are “at the heart of the Rivier experience.”

Its mission material identifies Rivier University is “a Catholic institution of higher education,” and says that “one of the University’s greatest strengths is its Roman Catholic heritage,” and that “the University a place where Judeo-Christian and Catholic values inform what we teach and what we talk about as a community.”

The University provided LifeSiteNews with the following statement in response to an inquiry into specifics of how featuring an image from a same-sex “wedding” in its University publication reconciles with its Catholic mission:

Rivier University consistently and accurately states its mission as a Catholic University embracing the intellectual, social and spiritual teachings of the Church. At the same time, Rivier is a diverse community composed of individuals of many different faith traditions and beliefs. The University does not filter wedding photos submitted for publication.

The University is a private institution located within the Diocese of Manchester, NH, and listed among the Catholic educational institutions on the diocesan website.

The Communications Director for the diocese told LifeSiteNews that Manchester Bishop Peter Libasci was gone from the office presiding over an event and would be unable to respond by press time.

Speaking later with Karen Cooper, University vice president of University Advancement, Doe said the Catholic Church does not condone this, and it was scandalous because it gives the impression that the Catholic is condoning “marriages” between same-sex couples.

Doe was told it was a celebration, and thanked repeatedly for sharing her “perspective.”

Doe said that Sister Buley informed her that she was aware of the photo and that they don’t make judgments.