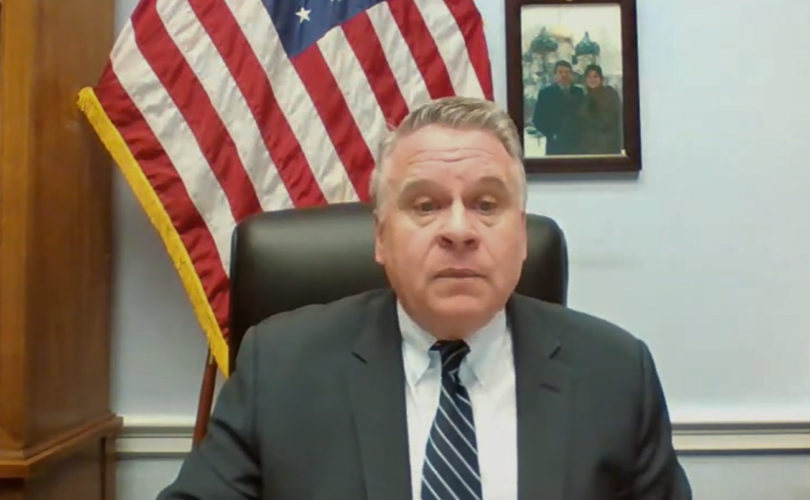 Smith, the ranking member of the Congressional-Executive Commission on China, denounced the police state that has been created by the 2020 National Security Law in Hong Kong as “a dismantling of civil society before our very eyes.” Focusing on “faith-based groups” in Hong Kong that until recently have been “very vibrant,” Smith pointed out that Catholic influence on Hong Kong’s elites, especially through the parochial education system, “has been quite profound.”

Highlighting some of the prominent citizens who have opposed the Chinese Communist Party in favor of democracy, Smith recounted the story of Jimmy Lai, a Catholic billionaire, businessman, and journalist. Lai refused to leave Hong Kong in spite of being in danger of arrest by China’s police and earlier this year was finally taken into custody.

The religious persecution that Hong Kong is now facing has kept the faithful Catholic Church underground for decades on the mainland.

“Jimmy remains in jail,” Smith said, “but he is a man of faith, who easily could have fled to safety, like the roughly 90,000 citizens who left Hong Kong between June 2020 and June 2021, because he is, or was, a rich man. Yet Jimmy stayed in Hong Kong to stand with those who spoke for freedom. Such a heroic man.”

Smith then praised the example of Cardinal Joseph Zen, Hong Kong’s bishop emeritus and the leading public voice on the Chinese Communists’ persecution of the Church in Hong Kong and mainland China.

“Towering above all is Cardinal Zen,” Smith declared, “who for years has been warning about communist China’s efforts to control the Church, in particular its Catholic schools, as well as education in general.

“The Church resisted efforts in 2012 to impose propagandistic citizen education using mainland approved textbooks in Catholic schools, which was a mere 10 years ago. Fast forward [to] today, however, and the teachers are being purged from schools at all different levels in Hong Kong, not only Catholic ones. The Cardinal has been a thorn in the side of Beijing as well as those in Hong Kong who sought to do the Chinese Communist Party’s bidding.”

“One perhaps should not be surprised,” Smith went on, “that at the beginning of this year a series of four articles appeared in Thai Kung Po, a newspaper owned by the Chinese government via its liaison office in Hong Kong, attacking the Cardinal.

“Then, at 90 years of age,” Smith recounted, “the next shoe dropped. The Cardinal was arrested in May of this year and charged under the National Security Law. His offenses included subversion — in other words, supporting democracy protesters — and collusion with foreign organizations. The latter is especially chilling when one considers how in communist China the Catholic Church was deemed a foreign power, with Chinese Catholics on the mainland forced to either join a patriotic church or go underground.”

“Indeed, just the other day the Holy See’s envoy, an unofficial representative in Hong Kong, Monsignor Javier Herrera Corona, warned Hong Kong Catholics that the freedoms they had enjoyed in the past are now fast disappearing and cautioned missionaries that Hong Kong is ‘not the great Catholic beachhead it was.’”

Smith then denounced the continued inadequacy of Washington’s response to the erosion of religious and civil freedoms in Hong Kong.

“What is so frustrating about this,” he said, “is all the signals that were missed here in Washington, indeed here in Congress. Too little and too late, certainly, to help save democracy in civil society in Hong Kong. Thus, here we are, no longer at a crossroads but further down the wrong road. Where we go from here depends in part on whether the world is paying attention, and especially, whether we here are paying attention.”

“To Martin Lee Howard, to Cardinal Zen, Jimmy Lai, and Joshua Wong, and all of those who have been unjustly arrested or imprisoned, please know,” Smith concluded, “please know, you are not forgotten.”

Lessons to be learned from the CCP takeover

Ching Cheong, a veteran Hong Kong journalist, also testified before Congress on the strategic toppling of Hong Kong’s autonomy and freedoms and the systematic targeting of all resistance that Beijing had planned before the treaty with Great Britain in 1997.

“In the early 1990s,” Cheong testified, “I gained access to a report by the National Security Ministry, in which we identified five social groups that might be potentially dangerous to the CCP. These included: journalists, religious leaders, lawyers, educators, and social workers.

“In 2003, Beijing mapped out a detailed game aimed at suppressing these five groups. It compiled a database of the prominent figures in each of these sectors and classified them according to their political attitude towards the CCP — either as friendly, neutral, or animus [hostile] — and developed different united front strategies for them either to co-opt or eliminate them.”

Cheong said there were several lessons for the world to be learned from what is happening in Hong Kong.

“In a short span of 25 years,” he said, “the once free society soon degenerated into an authoritarian one. For over a century, the city that had served as the haven for political dissidents from China, now becomes the exporter of political refugees itself. Once prized as the freest place in the Chinese-speaking world, now [it has] experienced unprecedented curtailment on freedom of speech and expression. The Pearl of the Orient, a highly successful crossbreed of East and West civilization, began to lose its luster, an irreparable loss to the whole world.”

Cheong lamented the fact that “the post-1997 history of Hong Kong” is a tragic story in which, “in time of peace, a free society based on the rule of law is being imperceptibly converted into an authoritarian one in which law becomes a tool of political repression.” He warned that “the world can learn from Hong Kong’s experience and draw important lessons therefrom to avoid begetting the same fate.”

Underscoring the dangers facing the West of falling into totalitarian rule, Cheong said, “We find with alarm that the tactics the CCP used to convert Hong Kong are being applied in Western democracies as well.”

“These familiar tactics,” he warned, “including propaganda, united front strategy, party-building mechanism, infiltration, and intelligence to name the most obvious, are clearly at work in the West. Our dreadful experience is therefore relevant to the whole world.

The U.S. Congressional hearing comes as the crisis in Hong Kong continues to gain international attention.

On July 7, the European Parliament passed a resolution in which it strongly condemned the arrests of Cardinal Zen the other four trustees of the 612 Humanitarian Relief Fund, calling it “an attack on the freedoms guaranteed in the Hong Kong Basic Law, including the freedom of religion or belief, particularly following the closure of over 60 civil society groups, and are symptomatic of the continued efforts of the People’s Republic of China to systematically destroy the last remnants of Hong Kong’s autonomy and freedoms and to suppress the pro-democracy movement.”

The resolution called on the Chinese government “to drop all charges against Cardinal Zen,” and urged the Vatican “to give full support to Cardinal Zen and other religious leaders who face persecution or the risk of detention under the national security regime in Hong Kong.” The Parliament also called on the Vatican “to strengthen its diplomatic efforts and its leverage on the Chinese authorities, and to demand that all charges against Cardinal Zen be dropped and an end to persecution and human rights violations.”

Condemning the Chinese Communist Party’s brazen disregard for the 1997 treaty with Great Britain, the declaration pointed out that “the People’s Republic of China is in continued breach of its obligations under the Sino-British Joint Declaration to uphold Hong Kong’s high degree of autonomy under the ‘One Country, Two Systems’ model, the rule of law, and basic human rights as enshrined in the Hong Kong Basic Law and in line with its domestic and international obligations as a signatory of the International Covenant on Civil and Political Rights.”

The Parliament then called on Beijing “to repeal the National Security Law completely and to recommit to upholding the Hong Kong Basic Law, which guarantees freedom of association, freedom of assembly, freedom of expression, and freedom of religion and belief.”

The full video of the US Congressional hearing on Hong Kong can be watched here.

Cdl Zen: Vatican has delivered Church in China into ‘hands of the madness of our government’