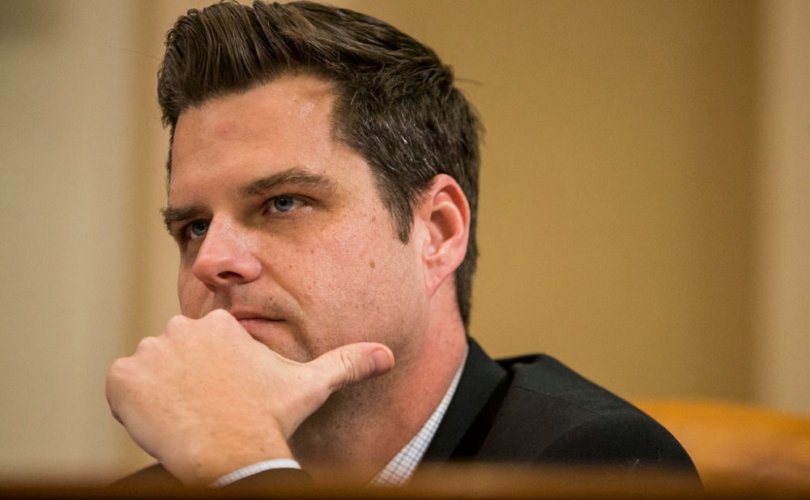 WASHINGTON, D.C., July 30, 2020 (LifeSiteNews) — Florida congressman Matt Gaetz has accused Google of election interference through the blacklisting of conservative news websites from its online search results after Google CEO Sundar Pichai admitted that the creation of lists of blocked sites “can involve a manual portion.”

Gaetz drew the admission from the Google CEO through persistent questioning during yesterday’s antitrust hearing at the U.S. House of Representatives.

However, he subsequently said that if a website or actor is considered to be “interfering in elections,” then the company put that site on a list in order to stop it appearing in online searches.

“For creating those lists, that process can involve a manual portion,” Pichai responded.

Gaetz focused on Pichai’s admission, noting that it differed significantly from testimony that he gave to Congress in December 2018, when he said Google did not manually interfere in search results.

“You said something today different than you did with Ms. Lofgren, you confessed that there is a manual component to the way in which you blacklist content,” Gaetz stated.

“It seems to be no coincidence that sites like Gateway Pundit, the Western Journal, American Spectator, Daily Caller, and Breitbart that receive the ire or the negative treatment as a consequence of your manual tooling,” the Republican congressman continued.

Gaetz followed up by questioning Pichai as to why conservatives should believe him when he says Google won’t interfere with the upcoming U.S. presidential election, in light of leaked video from 2016 that shows Google’s co-founders and other top executives reacting to the election of Donald Trump with anguish, contempt, and resolve to alter future elections.

“Now I know you’ve testified today in response to my questions and Mr Jordan’s questions that you don’t intend this time to engage in electioneering on behalf of the former Vice President, but given the video evidence of senior members of your team in your presence saying that they had the intent to make the Trump victory a blip, why should we believe that testimony today?” Gaetz asked.

“Since that moment in time when we’ve seen all these conservative websites and conservative viewpoints censored, you can understand why people would be concerned,” he continued.

“So after your employees and top executives said in your presence that they intended to make the Trump victory a blip, what action did you take as the CEO to protect and preserve the neutrality of your platform?” Gaetz asked.

“No one had a view on ever interfering with the elections or so on,” Pichai responded.

“But what I can tell you is that we made it very clear about two years ago we announced new community guidelines for within Google, clearly making it clear that, you know, employees obviously are free to have their political views, but they shouldn’t bring that as they work on any of our products. And if we found any evidence that people are using a political agenda to manipulate any of our content platforms we would take strong enforcement action.”

“Unfortunately we have a sort of string of events here,” Gaetz said. “We have the 2016 meeting where people demonstrated their intent to make changes to hurt the president, then we have your testimony today that’s a little different than your testimony from December, where you say that people can manipulate blacklists and then you have the outcome where sites like Breitbart and Gateway Pundit and others see that disparate treatment. So it really doesn’t take Sherlock Holmes here to connect the dots and see what Google’s doing.”

Earlier this week, LifeSiteNews joined with conservative media outlets around the United States in an open letter challenging the CEO of Google’s parent company over the removal of conservative websites from online search results

On Tuesday, Breitbart News released data that it says shows that “Google is deliberately working to interfere with the reelection of Trump in 2020” through purging Breitbart and other conservative websites from search results.

The online conservative news site also says its organic traffic from Google search results is down 63% from the first half of 2016 and that following an update by Google in May this year, traffic to Breitbart from Google searches about Democratic presidential candidate Joe Biden dropped overnight from tens of thousands a day to zero.