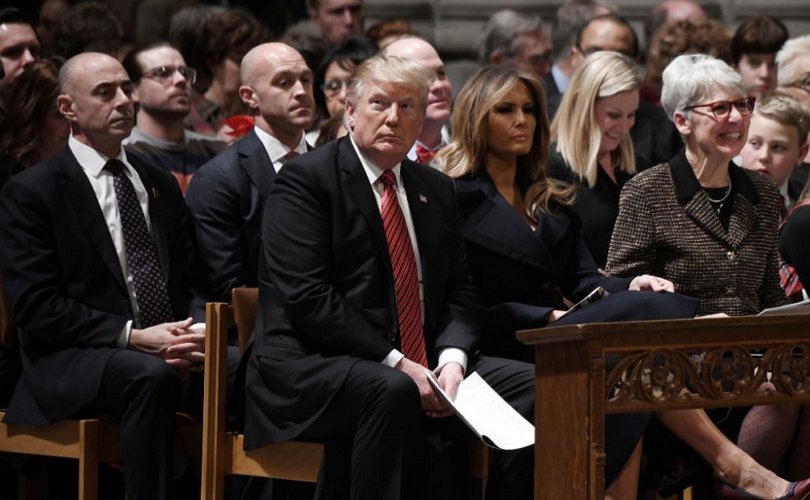 DETROIT, Michigan, September 16, 2020 (LifeSiteNews) — Trey Traynor, chairman of the Federal Election Commission, has reaffirmed that non-profits, including churches and religious leaders, “can absolutely engage” in political speech, like endorsing candidates and hosting them on church property.

Traynor referred to a little-known executive order signed by President Donald Trump on May 4, 2017, less than four months into his presidency.

“All executive departments and agencies … shall, to the greatest extent practicable and to the extent permitted by law, respect and protect the freedom of persons and organizations to engage in religious and political speech,” Trump wrote at the time.

“In particular, the Secretary of the Treasury shall ensure, to the extent permitted by law, that the Department of the Treasury does not take any adverse action against any individual, house of worship, or other religious organization on the basis that such individual or organization speaks or has spoken about moral or political issues from a religious perspective.”

Trump specifically mentioned “the imposition of any tax or tax penalty,” as well as “the delay or denial of tax-exempt status; the disallowance of tax deductions for contributions made to entities exempted from taxation under section 501(c)(3) of title 26, United States Code; or any other action that makes unavailable or denies any tax deduction, exemption, credit, or benefit,” as going against his executive order.

Ryan T. Anderson, William E. Simon Senior Research Fellow in American Principles & Public Policy at The Heritage Foundation, at the time criticized the executive order as being “rather weak.”

“All it includes is general language about the importance of religious liberty, saying the executive branch ‘will honor and enforce’ existing laws and instructing the Department of Justice to ‘issue guidance’ on existing law; directives to the Department of the Treasury to be lenient in the enforcement of the Johnson Amendment; and directives to the secretaries of the Treasury, Labor, and Health and Human Services (HHS) to ‘consider issuing amended regulations’ to ‘address conscience-based objections’ to the HHS contraception mandate,” he summarized.

“But the federal government should be honoring and enforcing our religious liberty laws anyway, legislation is required to actually address the Johnson Amendment — which isn’t the prime priority on religious liberty — and the Supreme Court has already unanimously instructed the federal government to resolve the case of Little Sisters of the Poor and other HHS mandate cases,” Anderson commented.

The Johnson Amendment, named after then-senator Lyndon B. Johnson, who was to become president a few years later, prohibits all 501(c)(3) non-profits from endorsing or opposing political candidates.

According to Traynor’s understanding, and contrary to Anderson’s interpretation, Trump’s executive order essentially made the Johnson Amendment unenforceable.

However, Traynor suggested that even if the executive order didn’t exist, “the American public would not tolerate the prosecution of either political candidates or a church for having a candidate show up. I think the First Amendment clearly protects that. It protects the church as an organization, regardless of its religious affiliation. It protects it as an organization of people getting together to hear from a candidate.”

“While in past cases it’s probably selective prosecution, I think ultimately it really is just the sense that the American people are not going to tolerate churches being prosecuted for having political candidates come in and talk about the issues of the day,” he continued in his interview with Michael Voris of Church Militant.

Even though bishops will be protected from “adverse action” if they speak out on political candidates, most of them refrain from doing so.

“The bishops are using their non-profit status as a shield to hide behind from having to make a decision about who to support, and to come out publicly and put meat on the bones,” Traynor explained. “They say we should have an informed conscience when we go vote. But they never really take that next step and say, ‘Here’s who meets the criteria. Once you’ve formed your conscience and you know what the position of the Church is on the issues, here are the candidates that really meet those guidelines.’”