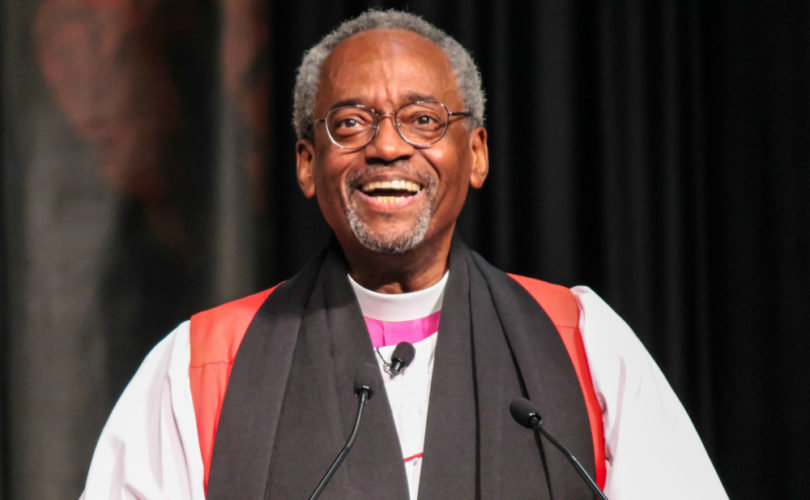 WASHINGTON, D.C., January 20, 2016 (LifeSiteNews) – The presiding bishop of the U.S. Episcopal Church says that his denomination will not repent of accepting same-sex “marriage.”

Presiding Bishop Michael Curry, the first African-American to lead U.S. Episcopalians, told leading Anglican archbishops meeting in England that despite recent sanctions imposed by Anglican leadership, the U.S. branch will not reverse its decision to approve of homosexuality.

“They heard from me directly that that's not something that we're considering,” Curry said. “We made our decision, and this is who we are.”

The leaders of the worldwide Anglican Communion suspended the U.S. Episcopal Church for three years over the issue. The primates of 38 Anglican churches throughout the world voted to bar the U.S. Episcopal Church from representing the denomination on ecumenical and interfaith organizations and from taking part in Anglican decision-making on any issues pertaining to doctrine or polity.

In the U.S., not only do Episcopalians accept gay “marriage,” but they also accept practicing homosexuals and lesbians as bishops and priests/priestesses.

Rev. David W. Haines, vicar general for Global Partnerships for the Anglican Province of America, said that his group broke off from the Episcopalians precisely because of increasingly liberal morals and ignoring the Word of God.

“Because of the errant ways of The Episcopal Church, its unbiblical actions and teachings … many lay people and clergy felt that to preserve the beauty, truth, and liturgy of the 'One, Holy, Catholic, and Apostolic Church' they must leave the Episcopal Church,” the bishops of the Anglican Province of America explained.

The issue of gay marriage is only the most recent in a long line of Episcopalian deviations from Holy Scripture, Rev. Haines said. He said other issues include abortion, homosexual clergy and bishops, priestesses, and substantive changes to the Book of Common Prayer.

Even though the Archbishop of Canterbury defended the suspension of the U.S. Episcopal Church, he issued an apology to gays “for the hurt and pain, in the past and present, that the church has caused and the love that we at times completely failed to show, and still do, in many parts of the world, including in this country.”

Anglican homosexual activist Jayne Ozanne commented, “We're not going away. We are here; baptized members of the faith, gathering our straight friends who are choosing to stand tall with us. Momentum is building, and I believe that is Holy Spirit-inspired.”