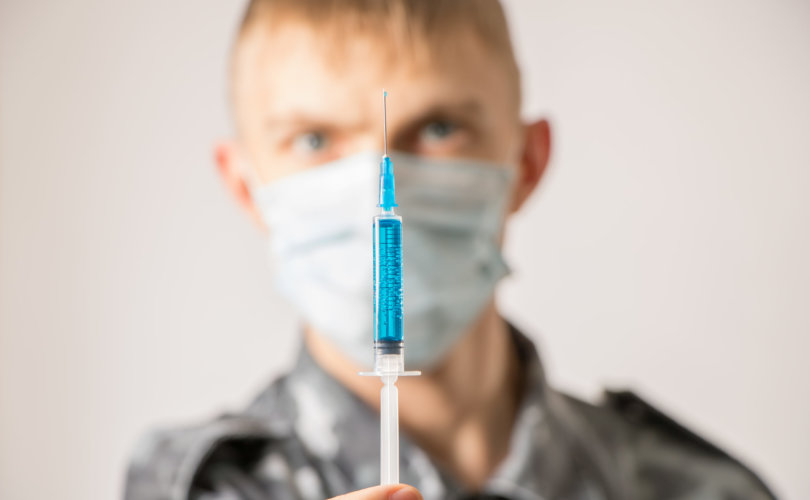 The conference, which was live-streamed here on LifeSiteNews, addressed numerous aspects of the issue, starting with an overview of medical billing data from the Pentagon’s Defense Medical Epidemiology Database (DMED), first brought to light in January by attorney Thomas Renz, during a COVID vaccine hearing arranged by U.S. Sen. Ron Johnson (R-WI)

“Keep in mind, these serious medical conditions are happening in a young, healthy population of very fit military people who are not at risk of dying of COVID and who typically don’t have these health problems,” said Truth for Health president and CEO Dr. Elizabeth Lee Vliet. “The CDC database and the DMED database shows heart attacks and myocardial infarctions in the young, healthy military groups are up over 269% in ten months. Pericarditis up 175%. Myocarditis inflammation of the heart muscle up 285%. Pulmonary embolism. Blood clots in the lungs up 467%. Blood clots to the brain. Cerebral infarction. Bell’s Palsy, Multiple Sclerosis Immunodeficiencies Cancers, miscarriage. All are up over 250%, and some are up more than 350%.”

“Why would the DOD knowingly continue to force these vaccine mandates in the face of such damage?” she asked.

“Using the CDC’s own data, our insurance industry experts associated with [former Blackrock portfolio manager] Edward Dowd and others in the field analyzed the data broken down by age group and created baselines to show the excess mortality by age group,” Vliet continued. “Millennials, age 25 to 44, had an 84% increase in deaths in the second half of 2021, the absolute worst record in our entire history. And this is the age group of our military. Starting in the summer and fall of 2021, there were 61,000 excess millennial deaths. Put that in perspective: 58,000 Americans died in the entire Vietnam War. So this generation of millennials experienced a greater number of excess deaths in part of one year of 2021. 61,000 versus the entire deaths of 58,000 in the entire Vietnam War.”

“The CDC’s own data is a smoking gun,” she declared.

In a statement to left-wing “fact-checking” outlet PolitiFact, Defense Health Agency’s Armed Forces Surveillance Division spokesperson Peter Graves confirmed the authenticity of the DMED records but claimed that a conveniently-timed “data corruption” glitch made the pre-2021 numbers appear far lower than the actual numbers of cases for those years, an explanation that PolitiFact took at face value despite questions about its plausibility.

Retired Army Lt. Colonel Peter Chambers, a former flight surgeon, also relayed the story about a “fit as a horse” 27-year-old infantryman who came to see him a week after taking the vaccine.

“Comes in and says, My chest hurts, doc. Okay, well, we take him over to the hospital. We run EKGs, got minor pericarditis, inflammation of the muscle and the lining of the heart. Right now, that kid has a 50% ejection fraction. Well, let me ask you this. What is his […] five year survival rate for a 27 year old with a half functioning heart? It’s not very long. That was my first case. And since then, I’ve had after before I left, there was at least 12 that went to the hospital. Anything from anaphylaxis, which is a reaction just to the shot itself. Two strokes, one hemorrhagic stroke, a bleeding stroke.”

“These are real things, people,” Chambers stressed. “I look at them. I look at, I talk to their families. This is real. This is real as it gets. And when I talk to legislators and they turn around and say, well, that’s just too sensitive, I can’t talk about that. Well, then let me tell you something. Let’s get those guys out, too. Let’s start putting some people in that understand that this warfare is usurping the nation. And is destroying our country.”