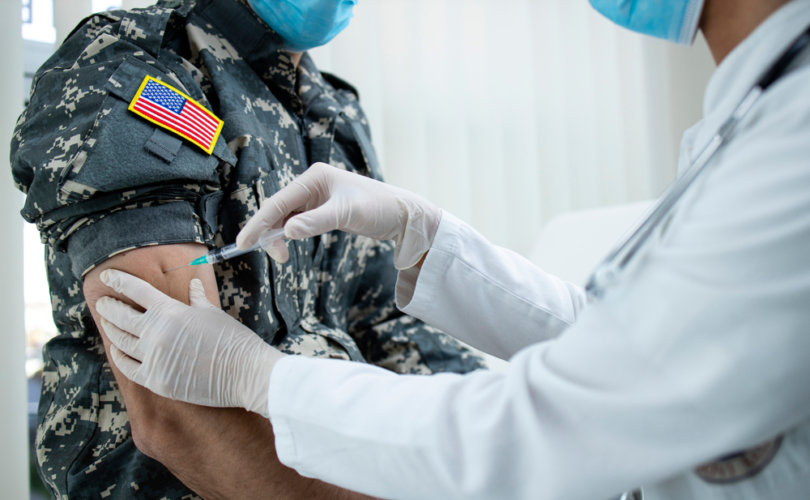 (LifeSiteNews) – Recent data from whistleblowers suggests U.S. government officials have been aware of alarming increases in dozens of diseases within military ranks, in correlation with the rollout of mandated COVID gene-based vaccines, and yet they continued to “lie” about the safety of the injections, according to Ohio-based attorney Thomas Renz

“This is egregious,” Renz told LifeSiteNews in a telephone interview. “They know this data. They have people whose job it is to monitor it. And despite that, they still lie about this [experimental vaccine] being ‘safe and effective,’ and they still try and push this out [onto the public].”

Three “decorated high-ranking soldiers who are doctors and public health officials” provided these figures from the Defense Medical Epidemiology Database (DMED) in sworn declarations under penalty of perjury, the attorney explained.

DMED is a health surveillance system that contains the International Classification of Diseases (ICD) codes for every medical diagnosis among U.S. military personnel and their families. It is designed to allow authorities the ability to identify any epidemics, bioterrorism attacks, or other relevant disease trends as a means of maintaining a healthy military force.

First establishing five-year averages on dozens of ICD codes utilizing data between 2016 and 2020, the three physicians discovered enormously pronounced spikes in 2021 over the five-year average across many categories.

In addition, these spikes are only a partial representation of the 2021 figures as they merely represent data from the first 10 months of the year, January through October.

In providing further samples of 2021 increases from the dozens of ICD medical diagnoses codes, Renz shared the following:

With regard to cases of myocardial infarction, Renz explained that these numbers seem to have been manipulated and significantly altered as earlier records in their possession show a 2021 rate of increase that was approximately 20 or 28 times higher than normal, but now current numbers show merely a 269% increase over the five-year average.

Having consulted experts, the attorney said that such sweeping spikes in so many areas indicate that these numbers don’t merely denote a correlation but a causation. “It’s statistically impossible for you to have this much data and for it to not be causation. You don’t have to be a scientist to know that when you see an [over] 1,000% increase under neurological issues in one year, and the only change is implementation of the [COVID] vaccine mandate, that there is an issue [with the shots].”

“And the doctors have told me, anecdotally, that they’re not only seeing more cancer, but they’re seeing incredibly aggressive cancer. The people that are getting this cancer, you know, they’re not coming back from it,” he said.

Last October, a Swedish lab study found that the spike protein associated with the COVID-19 illness and its experimental vaccines enters the nucleus of cells and significantly interferes with DNA damage-repair functions compromising a person’s adaptive immunity and perhaps encouraging the formation of cancer cells.

Turning his attention to authorities in the Biden administration, Renz emphasized that the government has this data with people and systems put it place to monitor it for precisely these types of indications. “And yet, instead of saying, ‘Oh, my God, something is going on,’ they said, ‘Full speed ahead and we’re throwing you out of the service if you don’t get [these shots]!’”

He also highlighted the general refusal of the military to honor medical and religious exemptions from their COVID-19 injection mandates while their own data showed tremendous dangers associated with the shots.

During Renz’s brief testimony last week, the medical freedom attorney recalled how in late September that Fauci and others were featured in the media, urging people to receive these injections. They claimed the nation was experiencing “a pandemic of the unvaccinated,” including 99 percent of hospitalizations being among those who have not been injected.

Yet drawing from such data sources, a DOD publication at the time, according to Renz, said “specifically, 71 percent of new cases are in the ‘fully vaccinated’ and 60 percent of hospitalizations are in the fully vaxxed.

For more than a year now, hundreds of experts have warned that the experimental COVID gene-based vaccines would be “ineffective and unsafe” and that they would likely lead to “foreseeable mass deaths.”

In March 2021, board-certified pathologist Dr. Ryan Cole reported that he was seeing a massive “uptick” in various autoimmune diseases and cancers in patients who have been COVID-vaccinated.

“Since January [2021], in the laboratory, I’m seeing a 20 times increase of endometrial cancers over what I see on an annual basis,” he said.

In December 2020, Dr. Michael Yeadon, former Pfizer vice president and chief scientist for allergy and respiratory, issued a petition to the European Medicines Agency (EMA) with another physician from Germany expressing several concerns with the testing of COVID-19 vaccines.

As he explained in an early August conference, one such concern was a lack of testing regarding impacts of the vaccines on fertility and the ability of women to bring a child to term, since the vaccine-induced spike protein was “faintly similar” to an essential protein in the placenta. If the spike protein induces an immune response against the placenta protein as well, fertility and the ability of a mother to bring a preborn child to term could be compromised.

In early January, it was reported that the president and CEO of an Indianapolis-based insurance company raised alarm regarding “the highest death rates we have seen in the history of this business,” stating they “are up 40% over what they were pre-pandemic” among “primarily working-age people 18 to 64.”

Other doctors have said that these shots are “technology designed to poison people,” and Dr. Shankara Chetty of South Africa has concluded that the purpose of the pandemic and vaccine campaigns is to “control and kill off a large proportion of our population without anyone suspecting that we were poisoned.”

Renz mentioned that they are preparing this data and the declarations from the military physicians to be submitted in a court of law, and more information will be forthcoming soon. He also expressed a request for prayers and financial support for his work at his  website.”

US gov’t whisteblowers sound alarm over increases in miscarriages, cancer, since COVID shot rollout
The US military is purging conservative Christians who object to abortion-tainted vaccines. Here’s proof:
Insurance company raises alarm over unprecedented spike in deaths…and they don’t seem to be from COVID
EXCLUSIVE – Former Pfizer VP: ‘Your government is lying to you in a way that could lead to your death.’
COVID shots intended to reduce world’s population by poisoning ‘billions’: South African doctor
It’s ‘entirely possible’ vaccine campaigns ‘will be used for massive-scale depopulation’: Former Pfizer VP
Prominent bishops, priests, laity sign ‘Bethlehem Declaration’ that opposes ‘morally illicit’ COVID shots