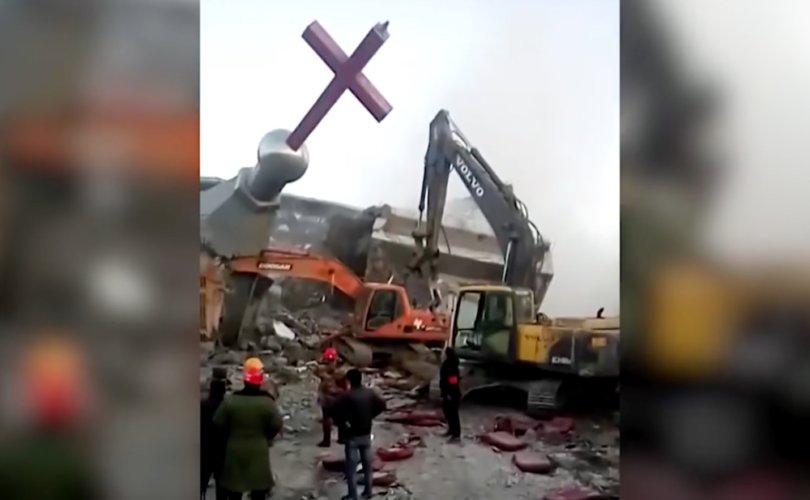 WASHINGTON D.C. January 9, 2020 (LifeSiteNews) – Religious persecution in China has increased rapidly over the past year, according to a new U.S. government report. The “intensity” of persecution, which, the report states, has not been seen “since the Cultural Revolution,” was linked to the Vatican signing a secret deal with the Chinese communist government to give the government power over the country’s Catholic Church.

“Observers have described religious persecution in China over the last year to be of an intensity not seen since the Cultural Revolution,” the annual report put out by the U.S. Congressional-Executive Commission on China (CECC) stated.

The report, released January 8, stated that the Chinese government under President and Communist Party General Secretary Xi Jinping has “doubled down on the ‘sinicization’ of religion—a campaign that aims to bring religion in China under closer official control and in line with officially sanctioned interpretations of Chinese culture.”

“Authorities have expanded the ‘sinicization’ campaign to target not only religions perceived as ‘foreign,’ such as Islam and Christianity, but also Chinese Buddhism, Taoism, and folk religious beliefs,” the report stated.

The report acknowledged that the rise in persecution of Catholics corresponded to the signing of the secret deal with the Vatican.

“In September 2018, the Chinese Ministry of Foreign Affairs signed an agreement with the Holy See, paving the way for the unification of state-sanctioned and underground Catholic communities. Subsequently, local Chinese authorities subjected Catholic believers in China to increased persecution by demolishing churches, removing crosses, and continuing to detain underground clergy. The Party-led Catholic national religious organizations also published a plan to ‘sinicize’ Catholicism in China.”

The communist-controlled Chinese Patriotic Catholic Association (CPCA), a parallel ecclesial grouping that is not in communion with the Pope, was created by the Chinese government in the 1950s and appoints its own bishops and priests. Catholic clergy and laity who are in union with the Pope have survived in secret in what has become known as the Underground Church. Those suspected by the government of involvement in the Underground Church have been imprisoned, murdered, and otherwise persecuted.

Recently, Bishop Agostino Cui Tai of Xinhua province was arrested by local authorities. The bishop had struggled to assert his episcopal authority in the face of resistance from a priest, Fr. Zhang Li, who had demanded that he should merge with the officially-sanctioned church. Episcopal Vicar Fr. Zhang Jianlin was arrested with the bishop. Catholics in China are praying for their safety.

The Vatican signed a provisional, secret agreement with China in 2018 that allows the government a say in the appointment of bishops, among other concessions. Chinese Cardinal Joseph Zen called the agreement an “incredible betrayal.” Critics’ warnings that persecution would worsen have since been borne out. Persecution of other Christians and unregistered churches has also increased.

Cardinal Zen has said that he fears that Pope Francis has been misled into encouraging “schism” among Catholics in China.

Zen has appealed to the Pope to defend persecuted Catholics in China, and recently revealed that he has sent a letter to the College of Cardinals pleading with them to denounce the agreement, sharing the “dubia” or questions that he gave to the Pope in 2019. He presented his questions to the pontiff after the Vatican released pastoral guidelines in June that allowed the civil registration of faithful clergy with the communist government. Some clergy of the Underground Church have refused to register with the government, arguing that doing so would mean betraying the real Catholic Church.

Cardinal Zen has deplored the Pope’s apparent silence regarding the plight of Chinese Catholics. He called on all Catholics to prevent the “murder” of the Church in China.

Other critics of the agreement include Stephen W. Mosher, an expert on China and founder of the Population Research Institute. Mosher wrote in 2019 that no deal between the Vatican and Beijing would have been better than the deal that was hatched. Both Cardinal Zen and Mosher have criticized Cardinal Pietro Parolin, the Vatican diplomat who spearheaded the deal. In the past, Zen has called for Parolin’s resignation, while in the recently published missive, Zen said that he is disgusted that the secret agreement with China is being presented as being in continuity with Popes John Paul II and Benedict XVI.

“Observers and Catholic believers expressed concern that the agreement did not provide sufficient support for the Chinese Catholic community,” the report stated, “with one scholar pointing out that the authorities’ persecution of both underground and official Catholic communities has actually intensified over the last year under the ‘sinicization’ campaign.”

It noted that in early 2019, the Chinese government arrested three priests of the Underground Church of  Xuanhua diocese in Hebei province. The report said, “Local Chinese authorities subjected Catholic believers in China to increasing persecution by demolishing churches, removing crosses, and continuing to detain underground clergy.”

The new Congressional report called for U.S. sanctions on China in the wake of increased government suppression of religious faith. The commission called on President Trump to strengthen the administration’s commitment to human rights and democratic governance as part of its mission. It stated that the president “should include expanding efforts within the U.S. Government to counter disinformation, coercive political influence operations, and censorship efforts, particularly those targeting diaspora communities.”

The report also recommended that Congress should demand “the right of Catholics to be led by clergy who are selected and who conduct their ministry according to the standard called for by Catholic religious beliefs.”

The report noted that China has not limited its persecution to Christians. The report said that “the Commission believes Chinese authorities may be committing crimes against humanity against the Uyghur people and other Turkic Muslims,” while estimating that “one million or more Uyghurs” are being held in internment camps and subjected to forced labor. Democracy advocates and Christians of various denominations have also been persecuted.

“Security personnel at the camps subjected detainees to torture, including forced ingestion of drugs; punishment for behavior deemed religious; forced labor; overcrowding; deprivation of food; and political indoctrination,” according to the report. When some detainees were sent to camps elsewhere in China, due to overcrowding, the report said that some died in the camps because of “poor conditions, medical neglect, or other reasons.”

Next month, China will put new restrictions into place for believers. It mandates that all religious groups should “adhere to the directives on religions in China, implementing the values of socialism” and promote the “principles and policies of the Chinese Communist Party.” An article in the new directives would require that “government authorities be involved in the selection of religious officers and involved in disputes.” Underground churches or “home” churches would thereby be outlawed.

There are approximately 10 million Catholics in China, according to the report, which noted that about 6 million are members of the state-controlled CPCA.