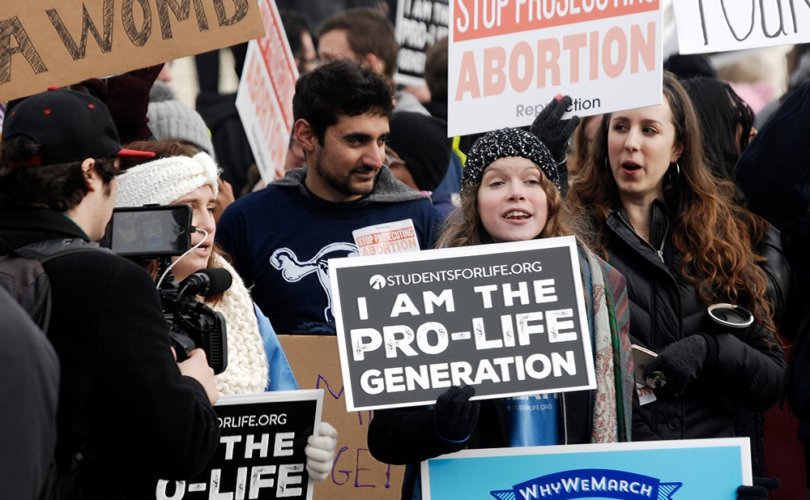 August 5, 2020 (LifeSiteNews) — A U.S. group made up of supporters of the pro-life cause is looking to create a “unifying symbol” for the pro-life movement in the form of a flag under which to rally all arms of the movement in “ending abortion.”

“Regardless of your religious and political beliefs, we are all unified around this one topic, ending abortion,” said the founder of the Pro-Life Flag project, Will McFadden, to LifeSiteNews.

According to the Pro-Life Flag Project, the pro-life movement lacks a single and “well known, unifying flag.”

McFadden told LifeSiteNews that the group’s goal is to create a new, universally, and freely accessible symbol that all pro-life groups and individuals, no matter their background, can use to promote the pro-life cause.

He came up with the idea for a unified pro-life flag in 2017 at the March for Life in Washington, D.C. “I initially thought about the idea for a pro-life flag back in 2017 at the March for Life,” McFadden said, “and the idea stuck with me for a couple years after. During that time, I was continually reminded of the need for a pro-life flag whenever I saw the rainbow flag. I thought, ‘Here’s a flag of a social movement that’s flown all over the world, and everyone knows exactly what it stands for.’”

McFadden stipulated that the “Pro-Life Flag Project does not take a stance on the LGBT movement, but we do acknowledge the profound effect that the rainbow flag has had on that movement.”

McFadden told LifeSiteNews that the project currently has over 50 partners with a reach of over 275,000 members in total.

The Pro-Life Flag Project officially launched its website in February of 2020 with just Heritage House as a partner. McFadden told LifeSiteNews that in the time since its launch, the group has added many more partners, with the latest being Students for Life of America.

According to the group’s website, the project’s staffers “believe[] that designing, promoting, and proudly flying a universal, freely-reproducible, pro-life flag across the country will significantly help the movement in its already-unified aim: ending abortion.”

“People around the country, regardless of their stance on abortion, will see the flag, know its meaning, and be compelled to think about the reality of abortion. Through positive symbolism within the design, the flag will also serve to positively brand the movement that has, in many mainstream currents, been so vilified and misrepresented.”

McFadden has two other partners helping him run the project and notes that the group is still in the preparation phase, with the actual design phase of the flag coming within the next few months.

The flag’s design phase will run for a total of nine weeks: six weeks of promotion, a week of submissions, and about two weeks of review and finalist selection. The contest will be held on 99designs.com, a website dedicated to hosting professional design contests to create logos and designs for businesses and other organizations.

McFadden told LifeSiteNews that the gruop decided to go with the site 99designs.com because it is a proven and reputable site and because the Pro-Life Flag Project also wants to gather interest from professional designers who might not have heard of the contest through initial pro-life promotions.

In addition to the professional design contest, the group is also holding an auxiliary contest for non-professionals. McFadden told LifeSiteNews that the group decided to have this second contest so everyone could have a chance to participate.

As an inspiration for the flag, the group has suggested that designers consider incorporating numerous symbolic elements, including the well known pro-life “Precious Feet” symbol, featuring a ten-week-old baby. This has been used since 1979 as the international symbol of the pro-life movement.

It was created by the pro-life organization Heritage House’s Virginia and Ellis Evers, with Virginia creating the lapel pin version, which, according to their site, has seen over 11,000,000 distributed worldwide.

“It is this little pin’s heritage that is laying the groundwork for a new, updated symbol of the pro-life movement … [a] freely-reproducible pro-life symbol for all,” says the group's website.

McFadden told LifeSiteNews that he hopes the Pro-Life Flag Project will soon be able to launch the design contest and added that anyone interested in signing up should visit the group’s website for more information.

Following the design phase, the voting phase will commence. This two-week period will be an opportunity for all pro-lifers to vote on which design finalist they like the most and want to see as the official flag of the pro-life movement.

“The Voting Phase allows us to hear the voice of the whole pro-life movement, truly making this project a movement-wide process,” McFadden told LifeSiteNews.

Jeff Gunnarson, national president of Campaign Life Coalition in Canada, told LifeSiteNews that the idea of a unified flag is a great one, so long as it is available to all.

“I think the flag is a good idea as long as it is free to be used by all pro-life groups and there were no conditions attached to the use of the flag,” Gunnarson told LifeSiteNews. “Hopefully it will give the movement a united look which may help in marketing the message that all pre-born children deserve protection from conception.”

McFadden confirmed for LifeSiteNews that the flag will be free to use for everyone worldwide, but the project’s partners will get to have a first look and use of the flag even before its official unveiling.

“All pro-life non-profit groups will be able to freely use and reproduce the flag however they’d like after its official unveiling. Our promotional partner organizations, however, will have access to the design immediately following the contest,” McFadden told LifeSiteNews.

“We hope that for-profit groups will want to use and reproduce the symbol as well, but we request they reach out to us first so that we can ensure the symbol is being used appropriately and in a way that is not detrimental to the pro-life movement. If you or your organization like the idea and want to get involved, we’d be happy to have you as a participant or a promotional partner. Please visit our website and get in touch with us.”