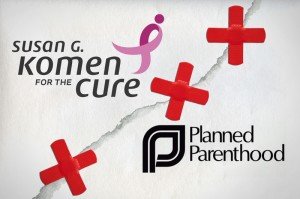 WASHINGTON, D.C., July 16, 2015 (LifeSiteNews) – Pro-life Republicans in the House of Representatives amended a commemorative coin bill to cut Susan G. Komen for the Cure off from a potential $4.75 million in revenues. This because the breast cancer research charity funds Planned Parenthood (PP), America's largest abortion provider.

The Breast Cancer Awareness Commemorative Coin Act was passed by the House 429 to 1 Wednesday afternoon after all references to Susan G. Komen for the Cure were removed. It now calls for the minting of gold and silver commemorative coins bearing a design about breast cancer research, with the profits going solely to the New York-based Breast Cancer Research Foundation.

A Republican aide told Roll Call the GOP was “working to ensure that charitable organizations which receive funding from this legislation are 100 percent focused on diagnosing, treating, and curing breast cancer.” Komen spends 20 percent of its budget on research.

Behind the GOP were two powerful social conservative organizations: the Heritage Foundation and the Family Research Council. FRC's chief, Tony Perkins, applauded the amendment, linking it to Susan G. Komen's controversial funding of PP. “It is past time for the federal government to stop funding Planned Parenthood, an organization that has provided cover for sex traffickers, engaged in gender targeting, and is known for dirty, bloody clinics.”

“This bill's goals are well-intended,” Perkins added. “But the results will only fund the nation's largest provider of abortions. There are better ways to fund cancer research that don't involve Planned Parenthood.”

In fact, the federal government does not fund PP directly, but PP applied for and received federal grants worth upwards of $500 million in 2013. Efforts by pro-life Republicans to pass laws specifically prohibiting the funding of PP in this way have been passed by the House, a GOP aide told LifeSiteNews, but they cannot survive in the Senate, where a bill may need only 51 votes to pass but effectively requires 60 votes in the 100-seat chamber to proceed.

Komen's removal from the bill may appear like a kind of comeuppance. In 2012, the foundation decided to stop funding PP but was subjected to such a hailstorm of criticism from rock bands, Democratic senators, movie stars, and board members that it relented and restored PP's money. The following year, donations fell off by 22%, though it was not made clear at the time whether this reflected disenchantment of Planned Parenthood supporters or of pro-lifers, or both.

The stripping of Komen from the coin bill, however, clearly reflects the House of Representatives' pro-life tack. The foundation did not respond to requests for comment, nor has it made a statement on the loss of funding.