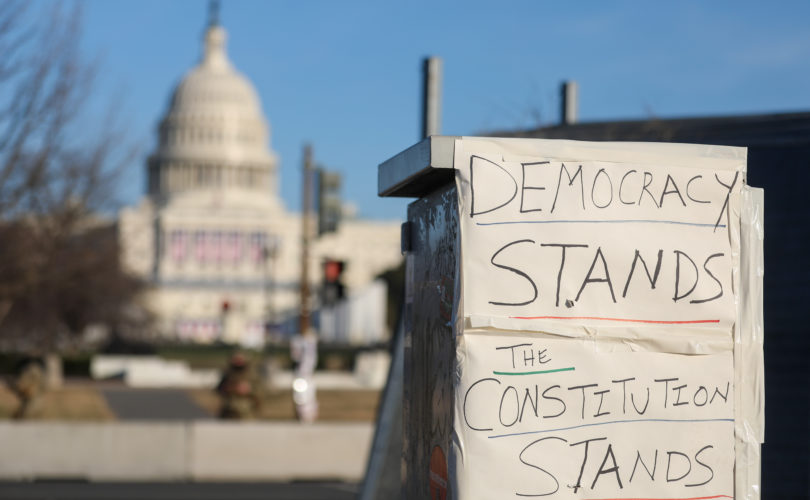 WASHINGTON, D.C., May 20, 2021 (LifeSiteNews) — The U.S. House of Representatives voted in bipartisan fashion on Wednesday to create a commission for investigating the January 6 incident on Capitol Hill. Such a commission will have virtually unlimited subpoena power over conservative organizations to access their records, internal communications, and conceivably their donor lists, with full access to any and all federal agency records.

The bill, which elevates the Capitol riot to a “domestic terrorist attack,” was passed with 35 Republicans joining all of the Democrats for a final passage with a tally of 252-175.

On Tuesday, Republican Minority Leader Kevin McCarthy of California released a statement opposing the bill, charging House Speaker Nancy Pelosi, D-California, with refusing to “negotiate in good faith on basic parameters that would govern a commission.”

“If it was a serious commission,” he said during an interview on the Ingraham Angle, “Nancy Pelosi would have had you research – remember on Good Friday an officer was killed at the Capitol – we don't need to investigate that. What about all the riots that have led up throughout the summer? The unrest from BLM, Antifa and others. No, you can't investigate that. This is driven solely by politics and Nancy Pelosi, but we should not be a part of that.”

Republicans in the House and Senate should not approve the Democrat trap of the January 6 Commission. It is just more partisan unfairness and unless the murders, riots, and fire bombings in Portland, Minneapolis, Seattle, Chicago, and New York are also going to be studied, this discussion should be ended immediately. Republicans must get much tougher and much smarter, and stop being used by the Radical Left. Hopefully, Mitch McConnell and Kevin McCarthy are listening!

Conservative activist Amy Kremer posted the names of the 35 Republicans who sided with the Democrats to pass the bill. The list includes all 10 GOP members who also voted to impeach President Trump earlier this year.

These are the 36 GOP members of the House that voted for the #Jan6Commission.

If passed by the U.S. Senate, the bill will establish a 10-member commission composed of five Democrat appointments and five Republicans with a Democrat member serving as chair.

Of significant concern to critics would be the commission’s authority to “issue subpoenas requiring the attendance and testimony of witnesses and the production of any evidence relating to any matter which the commission is empowered to investigate.”

And the matters to which the commission is “empowered to investigate” could not be broader. They include, “The facts and causes relating to the January 6, 2021 domestic terrorist attack upon the United States Capitol Complex,” as well as “the influencing factors that fomented such attack on American representative democracy while engaged in a constitutional process.”

According to one commentator, “The dangerous part about all this is that the subpoena power is limited to the imagination of the Democrat appointees. (We assume the likelihood that at least one Republican member of the Committee will go along with anything the Democrats want, thus giving them majority vote for a subpoena.)”

With such a mandate, the commission would be free to “subpoena records from conservative groups and websites – and their investors,” as well as to require access to “donor lists and personal communications from those having little to do with the events on January 6.”

And with the authority to investigate literally any and every conservative organization along with its members and supporters, the bill provides the commission full access to any and all data held by any department of the federal government including but not limited to the National Security Agency (NSA), the Central Intelligence Agency (CIA), and the Federal Bureau of Investigation (FBI).

The bill states, “The Commission may secure directly from any Federal department or agency information, including any underlying information that may be in the possession of the intelligence community, that is necessary to enable it to carry out its purposes and functions under this Act.”

After the high-stakes presidential election in November, which was marred by “staggering” amounts of evidence indicating massive fraud, hundreds of thousands of concerned citizens joined President Donald Trump for a rally on January 6, where he encouraged them to march “over to the Capitol building to peacefully and patriotically make your voices heard” as a joint session of Congress was scheduled to certify the election.

While violence was started at the Capitol by people who either left Trump’s speech early or skipped it entirely, there is evidence that activists behind Black Lives Matter were involved in the breach. When the larger crowds arrived, many were simply let into the Capitol by police and walked the halls.

With “unprecedented” speed, scale, and severity, the Department of Justice has targeted such individuals, including at least one adolescent with investigation and prosecution over the last several months.

With the bill moving to the U.S. Senate, Axios reported Tuesday that Senate Minority Leader Mitch McConnell, R-Kentucky, said he “can't support a Jan. 6 commission in its current form,” and that he and the “undecided” Republican caucus would be at least “pushing the pause button” on the legislation.